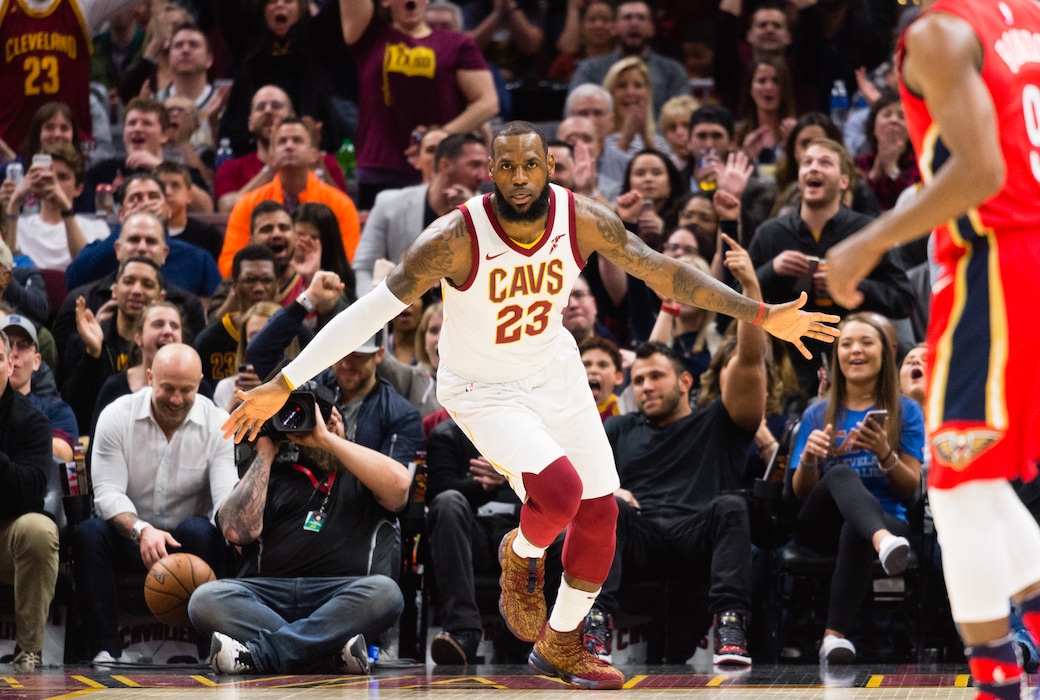 LeBron James scored in double figures for the 867th consecutive game and scored 27 points overall. James reached the double-figure mark in the first quarter and earned himself a standing ovation for passing Michael Jordan for the most such games in a row in NBA history. Jrue Holiday had 25 points to lead the Pelicans.

The Bulls scored just nine points in the third quarter, but came back to win thanks to a defensive push in the fourth. Chicago shot 2-22 in the third before holding the Magic to 13 points over the final 12 minutes to end their seven-game winning streak. Lauri Markkanen and Sean Kilpatrick each had 13 points, which was somehow enough to lead the team. Aaron Gordon had 18 for the Magic and neither team shot better than 35 percent from the field.

This didn’t count but we still wanted to share… @iamFelicio from waaaaaay downtown! #InAndOutAndInAgain pic.twitter.com/5eU0sUSFrp

Ben Simmons (13 points, 12 rebounds, 11 assists) had a triple-double after three quarters and the Sixers cruised to a win in Atlanta without Joel Embiid. Philly led by only six at halftime but used a 39-18 third quarter to end any doubt in the outcome. Ersan Ilyasova had 21 to lead all scorers and Damion Lee had 20 for the Hawks.

The Rockets trailed by 18 late in the third quarter, but James Harden (28 points, eight rebounds, 10 assists) spearheaded a comeback to set up a wild finish. First, it was a game-tying three from Harden with 12 seconds to go. Then, Josh Jackson (27 points) responded with what looked like the game-winner with 1.4 seconds left. But out of a timeout, Gerald Green did this:

Paul Millsap scored a career-high 36 points on 13-18 shooting to lead the Nuggets to an overtime win. Russell Westbrook (33 points, 13 assists, nine rebounds) missed what would have been the game-winning three at the end of regulation. He did, however, hit four threes and Carmelo Anthony hit five more as the Thunder set a franchise record with 20 for the game. Nikola Jokic had 23 points and 16 rebounds for Denver as well.

Karl-Anthony Towns had 21 points and 20 rebounds, and Jamal Crawford had 24 more as the Timberwolves won their second straight. Crawford scored 13 in the fourth quarter, including a huge shot with under 10 seconds left that put Minnesota up by four. Harrison Barnes had 19 to lead the Mavericks.

The Grizzlies hung around, but Dante Exum‘s 21 points (8-10 FG) helped put the Jazz over the top as he shined in the fourth quarter. Donovan Mitchell led the team with 22 points, and Joe Ingles had 17 points and 10 assists. Marc Gasol had 28 for Memphis.

We’ve got a live one pic.twitter.com/2Tu6QalvK6

Jusuf Nurkic had 21 points and 12 rebounds, while Damian Lillard added 17 points and 11 assists to lead the Blazers over the Clippers. Lou Williams had 23 for L.A., but the Clippers shot 4-13 from three and 20-35 from the foul line. With the win, Portland has now won three out of four as it looks to lock up the 3 seed in the West.

Eric Bledsoe scored 11 points in overtime and 39 overall to lead the Bucks to the close victory. Bledsoe also shot 7-12 from three, had six assists, and had four steals. Giannis Antetokounmpo went for 27 points and 16 rebounds as well. Kyle Kuzma had 27 points, 12 rebounds, and seven assists for the Lakers.