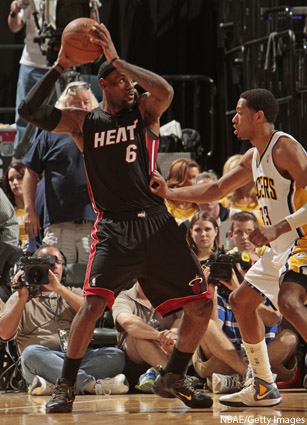 For a few minutes, maybe even an hour or two on Sunday afternoon, LeBron haters took a pause and paid respect to one heck of a Playoff performance. Finishing with 40 points, 18 rebounds, and 9 assists, LeBron flashed streaks of dominance and imposed his will for parts of the game. His statement became clear; He felt embarrassed after Game 3 and needed to make up for the blowout. “We had a terrible performance in Game 3,” explained LeBron. “We wanted to redeem ourselves. I felt like I needed to be more aggressive.”

Aggressive is one heck of an understatement to describe LeBron’s effort in Game 4. Dwight Howard stands as the only other player in the past decade to score 40 points and grab 18 rebounds in a game in the playoffs. LeBron guarded every position on the floor and rotated offensively to almost every position on the floor. His versatility and dominance showed all night long, especially in the third quarter. Wade and LeBron accounted for 28 points in the third; when in the same time the Pacers entire team dropped 16. Udonis Haslem also aided “The Big Two” down the stretch, netting a couple huge jumpers to kill a Pacers comeback.

The Pacers finished with their normal scoring distribution of four players in double figures after jumping out to a 9-0 lead to start the game. Minus an atrocious third quarter, they played well offensively and kept the Heat on their toes. Danny Granger led the way with 20, and Paul George put together a solid all around performance with 13 points, 6 rebounds, 5 assists, and 3 steals. Their lack of production from the front court—18 combined points from Hibbert and West—proved to be the difference in Game 4. Hibbert scored 19 of his own in Game 3 while West scored at least 14 in each of the prior three games of the series.

Quite frankly, the Heat clicked on all cylinders for a while (And by “on all cylinders” I mean Wade and LeBron dominating, with the other guys stepping in when needed.) They showed quick flashes of their basketball ceiling as a team and handled adversity well for a team with a less-than-stellar reputation for fourth-quarter performances. LeBron played like the MVP, Wade showed why he is considered a top 10 player in the league, and everyone else chipped in when applicable. Game 4 is exactly what people envisioned when LeBron decided to “take his talents to South Beach”. They got knocked down in the first half and roared back after recess. They took over the game like superstars do and left no doubt as to who the best players on the court were. The series now becomes a best of three for the Pacers and Heat. If LeBron and Wade charge out of the gate like they finished Game 4, the series will not need the third game. If Roy Hibbert and David West demand more post touches and dominate the paint like the earlier games in the series, we may have a thrilling seven-game series on our hands. —Dave Spahn (@DaveSpahn)

Something is not right with Chris Paul. There’s no doubt about it. Perhaps it’s his hip. Maybe it’s his groin. Everyone in his camp—specifically speaking, the Los Angeles Clippers and their training staff, has recently been particularly tight-lipped about his condition. One thing is certain: When it mattered most Sunday night at Staples Center, in the waning moments of Game 4 against the San Antonio Spurs, Paul could not deliver in the clutch. Injured or not, his shortcomings, and those of his teammates of course, resulted in a rather embarrassing series sweep at the hands of a clearly superior Spurs squad.

Questions about Paul’s lingering injuries were strategically deflected during the pre-game festivities, as expected. When the locker rooms opened up about an hour-and-a-half before the game, clear-cut answers about his status were hard to come by. Similarly, during the post-game news conference, the topic was avoided. No one was coming clean about Paul or his health. It didn’t matter how much poking prodding was performed by multiple members of the media. No one was talking.

Prior to the final few sequences of Sunday’s game, some credit was deserved. Paul did play well, after all. His 23 points on 9-of-18 shooting from the field, 11 assists, 6 rebounds and pair of steals were clear indications that he still had some pep in his step. His layup off the top of the backboard (a three-point play) late in the fourth quarter gave the Clippers and their fans a fleeting glimpse of hope.

The last two times Paul touched the ball in Sunday’s game, however, resulted in a turnover and missed shot in the lane on a short but challenged jumper. With a clean bill of health, he finds a way to get that shot to fall. Paul has done so in the past, mind you. Thing was, he didn’t have any lift left in his legs. The expression on his face, one of disappointment and exhaustion, told the story as he attempted to make his way to the locker room without causing a commotion. Easier said than done.

In terms of placing the blame on someone, Paul is not entirely at fault. There are plenty of fingers to be pointed in the direction of everyone from Lob City. To that end, the Spurs are about as well-rounded a unit as there is in the League right now. From top to bottom, their lineup is stacked. Truth be told, the Clippers didn’t stand of much of chance from the start. Nevertheless, at some point, Paul must answer questions about his health. As it stands now, we must assume that he was hurting quite a bit more than he let on. How else to explain the Clippers complete collapse in this series? —Sean Ceglinsky (@seanceglinsky)