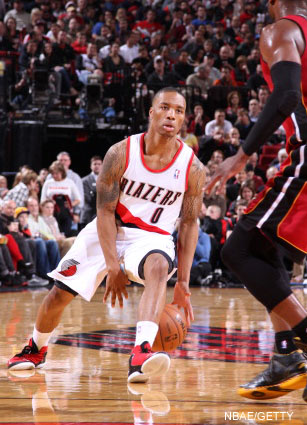 Last night, Damian Lillard shined in Oakland, the Knicks offense looked awful for three quarters and the Grizzlies won a thriller against the Spurs. Let’s go.

The Raptors jumped out to a big lead early and never looked back. Alan Anderson continued his surprise season with 16 points. Jose Calderon, who is outplaying Kyle Lowry this season, dropped 15 and 6 assists. Landry Fields tallied 11 rebounds for the second consecutive game.

James Harden led Houston with 24 points on 19 shots. Chandler Parsons hit a pair of threes on his way to 18 points, and Omer Asik posted 7 points and 11 rebounds.

Hawks (21-14) 103, Jazz (19-19) 95
The Jazz led by eight going into the fourth quarter before letting this game slip. It was tied with under three minutes left after an Al Horford bucket, and Atlanta closed the game on a 9-1 run from there.

Devin Harris was great for Atlanta, making 7-of-8 shots including 4-of-5 threes. Josh Smith went for 15 points, 10 boards and 6 assists. Lou Williams hit a clutch three late to ice the game and finished with 14. The Hawks made 55.6 percent of their shots and 9/19 from deep.

Carmelo Anthony dropped 39 for New York, but it took him awhile to get going. JR Smith needed 17 shots to score 13 points. Tyson Chandler snagged 18 rebounds, including 8 offensive. Strangely the Knicks made 11-of-22 three-pointers and 26-of-68 two-pointers. Chicago made nearly 58 percent of its shots.

Nets (21-15) 99, Suns (12-26) 79
Phoenix led by seven after the first half, but Brooklyn dominated the third and fourth quarters. Joe Johnson led the Nets with 19 points, while MarShon Brooks dropped 17 off the bench. It’s great to see Brooks playing well under new coach PJ Carlesimo. Reggie Evans grabbed 15 rebounds and made 3-of-4 shots from the floor. He’s a really amazing rebounder, and his inability to stay on any team for more than a year is nothing short of fascinating.

The Suns made under 40 percent of their shots and attempted half as many free throws as Brooklyn (32-16). Jared Dudley led the team with 18 points.

Grizzlies (24-10) 101, Spurs (28-11) 98
This was a great, great game. Memphis led by three points with a few seconds left after Zach Randolph canned a pair of free throws. Then Tony Parker played hero knocking down a deep three at the buzzer.

The game went into overtime, where Memphis again went up three points late after a nice transition play led to a Darrell Arthur dunk. Manu Ginobili was off the mark on a desperation three, ending the game.

Parker scored a team-high 30 for San Antonio. Tim Duncan went for 13 and 15, and Ginobili added 14 off the bench.

Hornets (11-25) 104, Timberwolves (16-17) 92
The Hornets erased a big first-quarter deficit, and led by nine entering the fourth quarter. They led by about ten for the entire quarter. Six players scored in double figures, and both Greivis Vasquez (13 assists) and Al-Farouq Aminu (13 rebounds) had double-doubles. Anthony Davis scored 9 points and failed to grab a rebound or block a shot in 23 minutes.

Luke Ridnour dropped 20 for the T-Wolves. Alex Shved, who has been solid this year, added 11 and 7. The team connected on just 4-of-18 threes and totaled only 31 rebounds.

Monta Ellis and Brandon Jennings made a combined 11-of-25 shots for 28 points. That’s not bad for some duos, but Milwaukee needs much more than that from the team’s two best players. Larry Sanders blocked 3 shots but played only 19 minutes. The Bucks made an incredible 1-of-16 shots from downtown (6.3 percent).

Kyrie Irving was awesome for Cleveland, scoring 28 points with 7 assists and 5 steals. Tristan Thompson added 16 and 7 and Dion Waiters scored 18 off the bench.

Kobe made only 8-of-23 shots, but hit 10-of-13 from the line and finished with 28. Antawn Jamison added 19 off the bench, and Earl Clark double-doubled. Steve Nash was quiet with 7 points and 7 assists.

Warriors (23-12) 103, Trail Blazers (20-16) 97
Golden State opened up a big lead early before Damian Lillard brought Portland back to life. The rookie dropped 37 points (including 7 treys) on 15-of-25 shooting. It was an unbelievable show in his return to his hometown—Oakland. He displayed mind-boggling range and has ridiculous quickness dashing to the hoop. Make sure to watch these highlights.

It wasn’t enough, though. David Lee posted 24 points and 10 rebounds, and Stephen Curry, who has stayed healthy and been awesome to watch this year, dropped 22 with 12 assists. Carl Landry added 15 off the bench, including a big bucket late to hold off Portland.