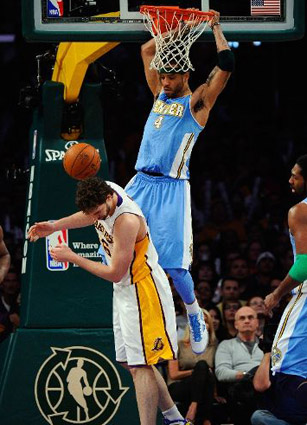 After a six-game streak of losses that had the Spurs looking like they barely deserved a Playoff spot to begin with—let alone, you know, the No. 1 seed—San Antonio finally bounced back, dominating the weak Suns’ D by dropping 114 points on it. Phoenix was sans Steve Nash, who was back in Phoenix with the flu, and the Spurs took full advantage, gaining control from the jump and having their way all game. George Hill boosted the Spurs in the first half with 24 points (29 total), while the squad’s bench was strong enough that every San Antonio starter was able play under 29 minutes, with Tim Duncan only needing to log 18 minutes of action in the win.

A close one, the Nuggets held on down the stretch behind some strong defense from Wilson Chandler (who D’ed up Kobe), and a powerful put-back from Kenyon Martin, which all but sealed it. Bryant led all scorers with 28, but Denver no longer functions with a superstar that’d be expected to top that, so their four guys in double figures and their ability to shoot more efficiently than the Lakers from the floor and from three-point land will do.

The Jazz have slowly faded out of the picture in the West, a fade made official by this terrible loss to the lowly Kings. Tyreke Evans, who’s been a little too quiet this season, provided 24 points and 10 dimes, while Paul Millsap led Utah with 21.

The Celtics, attempting to get their act together after a rough couple of weeks, took down the Pistons behind 45 combined points from Kevin Garnett and Paul Pierce. They shot 64.1 percent from the floor in the victory. Shaq attempted to play for the first time in a long while, and after five and a half long minutes on the court, he left with a strained calf muscle. Oof. Can the big man stay on the court for an extended Playoff run?

Behind LeBron’s 31, the Heat strolled by the Nets at The Rock. Erick Dampier put up an impressive 10-point, 14-rebound effort, and if you were wondering where those boards came from, a decent place to look might be Brook Lopez’s 16-3-3 stat line.

The Raptors ended a six-game slide, defeating the Magic in Toronto. Dwight Howard played just fine (31 points, 9 rebounds), but I’m going to go ahead and use this space to say that if he’s MVP, which many have been arguing for, shouldn’t his team be a little better than this? They’re now at fourth in the East, eight and a half games behind the conference-leading Bulls. I’m just sayin’. Seems kinda low.

The Knicks were able to accomplish something they haven’t pulled off in a long time. Yep, they finally Cavs. Oh, and they clinched a spot in the Playoffs, too. Amar’e Stoudemire scored 28, Carmelo Anthony put in 25 and Chauncey Billups added 23 as NYK earned a spot in the postseason for the first time since 2004. They were officially able to do so, though, because the Bobcats…

…lost to the Wizards. Andray Blatche beasted for 25 and 17, and Jordan Crawford dropped 23, as the Wiz earned another rare road victory in Charlotte. The ‘Cats can still technically make the Playoffs, but they’ll need to be rooting heavily against the Pacers, who are now up two games on ’em, because they…

…lost to the Hornets. (OK, I’m done with that.) Emeka Okafor scored 14 and grabbed 17, and Trevor Ariza dropped the game-high of 19 points.

Kevin Martin’s 35 points led the Rockets over Atlanta, but Houston still sits three games behind Memphis, which will make a Playoff run pretty damn difficult, at this point. They host Sacramento tomorrow night, when they’ll try to continue this one last push towards a chance at the postseason.

This could be potential 3-6 matchup out West, and something tells me Portland wouldn’t be too mad at that, at least judging by what we saw last night. The Blazers were led by Gerald Wallace (19 points, 8-10 from the field, 8 rebounds) and LaMarcus Aldridge (18 points, 8 rebounds), while Shawn Marion led his group with 19.