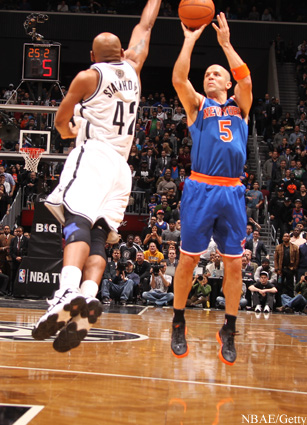 In Round Two of the ‘Battle for New York’, Brooklyn took advantage of the Knicks came flat start held a 17-point lead after one. But the wheels quickly came off the for the Nets and Carmelo Anthony went into superhuman mode with no Brooklyn player acting as his kryptonite. Anthony was unconscious, shooting 15-24 from the field to finish with 45 points. As he has done so many times this season already, Melo showed off his offensive prowess by hitting threes, posting defenders up, getting to the rack off the dribble and flashing his mid-range game. The many Knicks fans in attendance chanted “MVP!” “MVP!” and Melo looked every bit the part. Melo was unstoppable but it was the Knicks elder statesman who made all the key plays and hit the game-winning shot. J-Kidd finished with 18 points (6-9 shooting), 6 boards and 6 assists over 37 minutes. On a night when Ray Felton struggled, New York needed every bit of that effort out of Kidd’s 39 year-old legs.

With the game knotted at 97, the ball came to Kidd on the left wing and he launched a three that hit the bottom of the net and was fouled on the shot. He bricked the free-throw but both Gerald Wallace and Deron Williams missed potential game-tying three’s on the other end and the Knicks pulled out a tough come-from-behind win.

— J.R. Smith finished with 16 and carried the Knicks for a stretch while playing injured.

— Tyson Chandler is so active underneath. He had several offensive “tap-outs” that gave the Knicks a chance to reset their offense and get a good shot.

— D-Will finished with 18 and 10 dimes but should have had more.

Over the summer, Kyrie Irving challenged Kobe to a game of one-on-one. Though it never came to fruition, last night was just as good as fans got to see the two go at each other over a full 48 minutes. Irving, who hadn’t played in three weeks due to a finger injury, was absolutely electric. The second-year guard dropped 28 points and dished out a season-high 11 assists and made Laker defenders look downright silly on more than a few occasions. Kobe was no slouch either. The Black Mamba wasn’t about to let the young’n outshine him so he went ahead and dropped 42–but it wasn’t enough. The Lakers are in trouble and despite their recent woes, they should still be able to beat a team like Cleveland. Offensively–outside of Bean–the Lakers were putrid from the field, shooting 31.9 percent and once again looked out of sorts running coach D’Antoni’s offense. The Lakers fell behind by as many as 16 in the third and even though Kobe was on fire in the fourth (scoring 16 of his 42) he didn’t get the support from his teammates and the Lakers dropped another one. The Lakers travel to New York to take on the Knicks this Thursday with a chance to right the ship against one of the league’s hottest teams.

— C.J. Miles got the start for Cleveland and proceeded to drop 28 points. Anderson Varejao scored 20 and Alonzo Gee chipped in with 17.

— Steve Nash said he was “at least two weeks” away from returning. Uh-oh.

After getting off to a slow start and falling behind 21-4, George Karl went to his bench early. Karl’s decision was rewarded when JaVale McGee, Corey Brewer and Andre Miller brought energy onto the floor and helped the Nuggets crawl back into the game. In the second quarter, Denver outscored Detroit 31-7 and took a 48-42 lead into the half. Trailing by as many as nine in the second half, the Pistons mounted a comeback of their own and made it a two-point contest after Rodney Stuckey’s layup with seven and a half minutes remaining. But the Nuggets responded with a 6-0 run, and after a three by Gallo and a layup by Ty Lawson, the Nuggs were back up by nine with under two minutes left to close this one out.

— One of my favorite groups of all-time, Naughty By Nature, performed at halftime.

Fitting that a game between the 2012 versions of the Wizards and Hornets would be ugly. Neither team shot over 33 percent from the field and botch were even worse from beyond the arc. This one was tough, so let’s just cut to the good part–the end of the game. D.C. trailed by as many as 13 and never had a lead until the fourth quarter when Crawford hit a three to break a 65-65 tie. The next time the Wiz had the ball, Crawford hit a layup and was fouled. After the free throw the Wiz were up 71-65 and it was enough to put this one to bed. Crawford, who shot 9-26 to finish with 26 points, scored 12 in the fourth quarter including four of the Wizards final five buckets.

— The win was D.C.’s first away from home on the season.

— Bradley Beal chipped in with 15 and Nene had a 10 and 10 double-double off the bench.

— Ant Davis made his return from an injury and scored 13 points and grabbed 8 boards in 25 minutes.

— Ryan Anderson led the Hornets with 17.

Don’t look now, but the Clippers won their seventh straight game last night against the Bulls and are making a strong case as the team to beat in the West. The Clippers, who are known for their high-flying offense, played physical and won the game with a tough defensive effort. Los Angeles forced 17 turnovers and had 11 steals, which they turned into 17 fast break points, and outscored Chicago 50-38 inside. Blake Griffin was an absolute monster in the paint. With a string of crowd-silencing dunks and even a three-pointer, Griffin finished with 22 points and 10 boards and continued his strong play after a rocky start to the season. The Clippers’ bench outscored Chicago’s 34-21 and were instrumental, as usual, in the victory. Eric Bledsoe scored four points to trigger an 8-2 run at the beginning of the fourth which gave the Clippers a comfortable lead the rest of the way.

— Carlos Boozer paced the Bulls with 24 points and 13 boards.