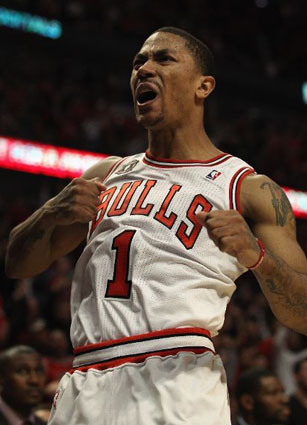 Danny Granger has been making memorable statements for the past week and a half.

It started when he said that he’d rather play the Chicago Bulls in the first round instead of the Boston Celtics.

Then prior to Game 1, Granger said, “The pressure, honestly, is really on [Chicago]. Everybody thinks we’re going to lose anyway. So we can just come out and play free and get a win.”

And that’s exactly what the Indiana Pacers did.

Granger was cooking, Tyler ‘Psycho T’ Hansbrough played out of his mind, and Darren Collison—in the first half anyway—played pretty well, too. The tension in the United Center was thick, and you could almost reach out and touch the pressure.

And that’s when Derrick Rose showed up and stole victory from the jaws of defeat. He led Chicago in closing out the Pacers on a 16-1 run, demoralizing Indiana. No matter what Granger and the Pacers did, the Bulls just wouldn’t go away. That led to this zinger from Granger when asked (by yours truly) if they ever felt that they’d had the game in hand.

“With Chicago, no. With Derrick Rose on the other team, no. You know, it’s like a crazy, stalker ex-girlfriend. Every time you tell her you don’t want to talk to her, she shows up at the door again.”

For 46 minutes and 33 seconds, the Pacers were in complete control of Game 1. Unfortunately for them, a regulation NBA contest lasts 48 minutes. —Bryan Crawford

For 76ers’ coach Doug Collins, the goal was to hold the Miami Heat’s “Big Three” below 75 combined points. The Sixers achieved this goal, but they failed to complete the larger task at hand. In the end, 63 points between the Heat’s star trio, and 34 from the other guys, were enough to grab Game 1 from Philadelphia. Chris Bosh was the game’s high man in both points and rebounds, with 25 and 12.

Miami’s up-and-down performance in yesterday’s contest could be described as a snapshot of the Heat season. The Heat trailed by 12 at the end of the 1st, after allowing Philly to shoot 61 percent from the field. But Miami outscored Philadelphia 35-18 in the 2nd, and a strong third period widened the Heat’s lead to 16. Thaddeus Young’s 12 fourth quarter points and two huge three balls from Jrue Holiday cut the Heat lead down to as low as 1. But then Dwyane Wade fired back with a difficult lay-up make, and LeBron James had a key block inside of the final minute that preserved the Heat lead.

As predicted in the series preview, the Heat out-rebounded the Sixers, by a count of 52-39. The Sixers, one of the League’s worst at getting to the free throw line, only had 15 attempts compared to the Heat’s 39 tries from the line. The much maligned Heat bench scored a total of 18 points, and combined for 11 rebounds.

Although Andre Iguodala defended James and Bosh well, he only chipped in 4 points to go along with his 8 boards, and 9 dimes. It is unlikely that Philly will again hold Wade and James to 17 and 21 points, respectively, so yesterday seemed like a golden opportunity to win. Spencer Hawes and Andres Nocioni gave the Sixers virtually no contributions, while Mike Miller saw less than three minutes of game action for the Heat. —Cris Jones

Dwight Howard and Jameer Nelson could not do it alone. Howard scored a regular season and Playoff career-best 46 points and set a Magic record with 31 points in the first half. His 46 points tied the franchise record for points in a Playoff game. He shot 16/23 from the field and 14/22 from the line to go along with 19 rebounds in a game-high 46 minutes.

After scoring one point in the first half, Nelson turned it up in the third quarter, scoring 20 to break his own team Playoff record for points in a quarter. In that third quarter, Nelson accounted for 20 of Orlando’s 23 points. The rest of the lineup was completely absent offensively as Howard and Nelson totaled 73 of the Magic’s 93 points.

The Hawks, who had instituted a revamped offense to limit isolation plays this season, had five players in double figures and shot 51 percent from the field. They made 6 of their 14 three-point attempts compared to 6 of 22 for the Magic. Jason Collins started the game on Dwight Howard, and despite fouling out, gave the Hawks confidence in their ability to matchup vs the Magic using their big lineup.

Joe Johnson, who averaged 12.8 points against Orlando in the 2010 Conference Semifinals, led the Hawks with 25 points and Jamal Crawford added 23 off the bench. The Hawks have won four straight against the Magic dating back to the regular season. —Tracy Weissenberg

The Blazers have the youth, athleticism, feistiness—all the stuff that’s supposed to help an underdog sneak by an unsuspecting group of veterans. But last night, a couple of old dudes gritted it out, hitting big shot after big shot to lead their squad to a Game 1 victory.

With the the contest neck-and-neck heading into the fourth, both Dirk Nowitzki and Jason Kidd showed their opponent the importance of experience. Nowizki dropped 18 of his 28 in the final quarter, while Kidd, who’s stuck to his role as more facilitator and less scorer this season, surprised many by draining six treys—most of them during crucial moments, often when Portland was attempting a run.

The Blazers did keep things competitive, always fighting back to stay within reach, and occasionally taking small leads, but every time that happened, like clockwork, Kidd or Nowitzki would step up and drill a big bucket, or a couple of big buckets in a row. LaMarcus Aldridge led Portland with 27 points (and finished approximately 87 alley-oops), and Andre Miller did a solid job (on the offensive end, at least) putting in 18 and dishing 6. Though if they want a chance at an unlikely first-round upset, the Blazers are going to need to work on a few things—spreading the ball around, making timely stops, converting on three-point attempts—before Game 2.

But closing out the guy who’s hit the third most three-pointers in the history of the NBA would probably be a solid place to start. —Adam Figman