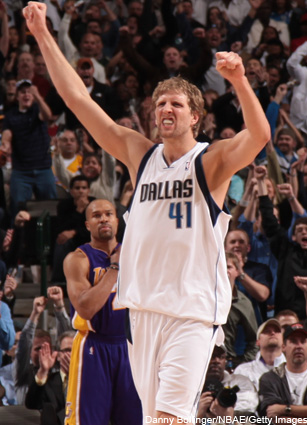 Okay, okay, gotta be quick tonight. I was at the arena for almost nine hours for the game tonight and I’ve got prac in the a.m.  so I want to try to get some sleep before 3 a.m. tonight. I went to the arena super early last night and it paid off. Got to sit down for a convo with my favorite assistant coach in the league last night, so that was fun. Now to transcribe the mammoth file, eeek.

Anyway, the Blazers got a big win on the second night of a back-to-back against the Raptors, winning 101-87. After the Raps had topped 100 points in 20 straight contests, Portland broke their streak and got the W. With 20 points from Brandon Roy and 18 points, 10 assists from Andre Miller, the Blazers built a 17-point lead in the first half, and without Chris Bosh, the Raptors were unable to come back in the second, despite Hedo Turkoglu’s 24 points on 8-for-9 shooting and another strong effort from Jarrett Jack.

The Grizzlies used a 13-2 run and 10 fourth quarter points from OJ Mayo to take the 99-94 victory over the poor Wizards. I don’t think I’ve yet recovered from the news of Josh Howard’s torn acl. My heart sank when they notified me after Raps practice and two days later, it still sinks to think about it. For Memphis, the trio of Zach Randolph, Rudy Gay and Marc Gasol each topped 20. Andray Blatche continued his strong play since the trades, scoring 24 points while Al Thornton added 16 and 11 in the loss.

In disappointing news, the Thunder lost against tonight and Kevin Durant’s streak of topping 25 points stopped at 29. Against the Spurs, OKC fell, 95-87 and KD was held to 21 points on 19 field goal attempts. My pg Russ Westbrook struggled, shooting just 6-for-21 from the floor for his 17 points. The Thunder shot just 39 percent as a team while giving up a 19-point, 15-rebound, six-assist night from Tim Duncan and 26 points off of the bench from Manu.

I didn’t catch any of the Lakers/Mavs game, but looks like Lakers fans are not impressed. Lots of mean things being said about Pau on Twitter. Can’t really comment because I didn’t see any of it, but yeah, the boxscore says, Dallas took the game, 101-96 and that Pau was quiet, with 11 points and six boards. Oops. One night after Kobe had a great shooting night, he went 9-for-23 from the floor for his 20 points while Dirk was huge for the Mavs, scoring 31 points on 10-for-19 points to go with nine rebounds and five blocked shots. Jason Terry also added 30 off of the bench.

In Phoenix, Steve Nash came back from a game off to score 20 points and dish 13 assists as he lead the Suns to a 106-95 victory over the Sixers. The Suns shot 51 percent for the game and had five players reach double-figures.

The Bucks took down the Hornets 115-85, despite 25 from Marcus Thornton off of the bench and 22 points and nine assists from Darren Collison in the loss. Quick question: What are the Hornets going to do with Collison when Chris Paul comes back? Do they really want him sitting on the bench? I mean, you’ve got to play Chris, but Collison needs minutes so he can continue to develop. Andrew Bogut had 26 points and 13 rebounds for the Bucks.

30 and 16 for Dwight Howard in an Orlando win over the Rockets. 110-92 was the score and doesn’t it just seem like out of nowhere, Dwight is back to posting huge numbers? It’s about damn time. Happy to see it.

Okay, fill in the gaps for me. Can’t believe it’s Thursday already. Boston/Cleveland tonight is going to be a good one. Can’t wait to settle in and watch that one. Also looking forward to seeing the Cavs on Friday night, here in Toronto. It would be nice if Chris Bosh was healthy to play, but we’ll see.