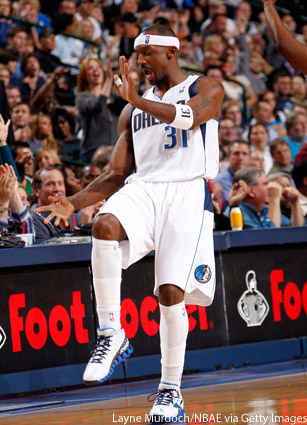 A mild set of Monday night hoops. Out of the seven games, three were showdowns between potential Western Conference postseason opponents—so let’s start with the other four and then move to those. Cool?

I’d be lying if I said I wasn’t pulling for everyone’s new favorite underdog (Minny), but the Cats did get a much-needed home W after dropping four straight in Charlotte, so props extended. Stephen Jackson and Gerald Wallace both scored 26 in 40-plus minutes, while DJ Augustin (9 points, 11 dimes) and Tyrus Thomas (20 points, 10 boards) were both big factors. For the TWolves, Michael Beasley’s strong streak continued, as he scored 28, while Darko Milicic (hey!) went for 13 and 12. Minnesota will look to bounce back at home against the Clips tomorrow.

In last night’s biggest mess of a game, the Grizz shot 36 percent and the Magic shot 44 percent, though the 8 percent separation made all the difference and Orlando won easily. Dwight Howard (18 and 14) and Vince Carter (19 points) led the team, while Marc Gasol was the high scorer from Memphis’ sad output, with 14. Not exactly one to tell the grandkids about. The victors moved to 7-3, and now have sole possession of first in the Southeast.

Down 31 earlier in the game, the Pistons stormed back and were down just two with six seconds remaining—but it was too little (though still kind of a lot), too late, and some GSW free throws sealed it. Monta Ellis’ (27 points) scoring streak continued, and Steph Curry’s 21-5-4 stat line helped the team jump ahead in the first half. Charlie Villanueva led Detroit with 18 in the losing effort. Also, Tayshaun Prince and coach John Kuester were going at it early in the game—so we’ll have to keep on eye out to see if anything develops with that situation. With the squad struggling, something tells me one of those two will be on their way out sooner or later. Maybe both.

Here’s a crazy fact: The Nets are the second best team in the Atlantic division. Yeah, I don’t know. Brook Lopez led the team with 24, and Jordan Farmar scored 15 and distributed 12 dimes off the bench. For the Clippers, Eric Gordon dropped 30 in the loss, and my fantasy team is greatly appreciative. Wait, one more crazy fact: New Jersey shot 59.7 percent (43-72) from the field, and 94.7 percent (18-19) from the line. That, SLAM Fam, is how you win basketball games in the National Basketball Association. Or so I’m told.

This had to happen eventually. Behind their roaring home crowd, the Mavs were the NBA’s first to take down the Hornets—and now zero undefeated squads remain. Jason Terry had both a game-high 26 points and a go-ahead bucket with 33 seconds, and Dirk Nowitzki went for 25 and 10 and had a few big baskets of his own. Most importantly, though, is that we’ve officially established this: The West is really, really competitive, and will be awesome to watch unfold come playoff time. You already knew that? Damn. Moving on.

For weeks I’ve been saying that if the Thunder want a legit shot at taking down the best teams in their conference, they’ll need a third player to step up alongside Russell Westbrook (22 points, 7 assists) and Kevin Durant (30 points, 6 rebounds, 4 dimes). OK, Serge Ibaka (22 points, 11 boards). I see you. OKC jumped ahead in this one, and though Deron Williams (31 points, 11 dimes) and Co. tried and started to get back ahead, it just wasn’t going down like that. The whole go-down-and-try-to-pull-off-the-miraculous-comeback thing works sometimes, but is always dangerous. Also: Oklahoma City shot 50.7 percent, while Utah shot 50.6 percent, meaning this one was ultimately decided by .1 percent. Math!

Everyone’s favorite long-range shooters won, somehow, despite hitting only four out of 20 threes. Weird night. Hakim Warrick led the Suns with 21 (see, told you it was weird), while group leader Steve Nash dropped 15 and dished 7. Denver actually had some noteworthy stats—well, just one: Carmelo Anthony scored 20 but feasted on Phoenix’s Robin Lopez-less interior and grabbed 22 rebounds. But they lost, so you know, there’s that. This game was close towards the end, but the Suns made some clutch buckets and got some needed stops, enabling them to pull this one out. Record-wise, both of these two remain in the middle of the pack, with Phoenix moving to 6-4 and Denver falling to 5-5.

Performance of the Night: Nothing’s really jumping out, so I’m going with this: Michael Vick: 333 passing yards, 4 passing td’s, 80 rushing yards, 2 rushing td’s. As a Giants fan, this makes me mad, but as a human being fan, this makes me happy. No comment on which I consider to be more important. And yeah, I realize this isn’t hoops-related, but we’ll let football take the forefront for once—if only because the NBA dominates the rest of the week and most Mondays too. If this gets me fired, it’s been a pleasure, y’all. In my memory, treat the next weekday Post Up writer with nothing but disrespect and negative comments. Thanks!
Moment of the Night: (Update: Check the video below.) Devin Harris fouled Blake Griffin by doing essentially what the Skins couldn’t to Vick: tackling him to the ground. The flagrant sent the rook to down hard and earned the Net an ejection. Definitely a scary moment, especially after all Blake’s gone through to get himself into the League, but he popped up and was alright. No word yet on a potential suspension/fine for Harris, but both are pretty strong possibilities.