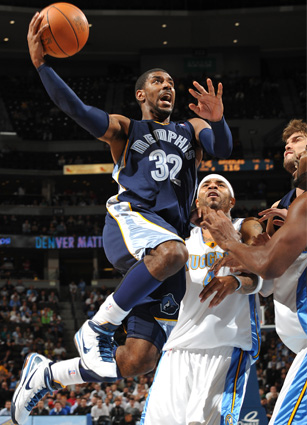 Ooof. It’s tough when the team you watch day in and day out loses.

People have constantly been asking me if I’m a Raptors fan, but it’s hard to describe. I’m a basketball fan. I’m a basketball writer. I root for players, good stories and great games. That being said, seeing the same group of guys every day at practice, hearing them talk about how much they want to do the right things and win, watching them stay late after practice to get extra shots up, you want them to succeed.

That being said, it was easy to fall in love with the game the Magic were playing yesterday, taking down the Raptors 125-116. With Vince Carter and Mickael Pietrus out, they get huge performances from JJ Redick (career-high 27 points to go with six rebounds and five assists in a career-high 45 minutes), Ryan Anderson (20 points, five three-pointers), Jameer Nelson (30 points, five three-pointers) and Matt Barnes who had six steals in the game to go with his 12 points. Dwight was Dwight, finishing with 24 points and 11 rebounds.

The Raptors defense was AWOL yesterday afternoon. Chris Bosh put in another monster performance, finishing with 35 points and 16 rebounds, but it wasn’t enough. It’s got to be tough to put in performances like that and still get the “L.”

The interesting thing is: despite the Magic connecting on 17 three-pointers, Dwight goes 14-16 from the free throw line while Bosh finishes 13-19. On a normal night, those numbers would be reversed. Yesterday, the Raptors were down 22 before the midway point of the second quarter.

There really isn’t anything I can say about the Lakers. Using an 18-0 run in the third quarter to blow open their game against the Atlant Hawks, they just look too good. Lamar finished two assists shy of a triple double, Kobe had the 41 points to go with five steals and Andre Bynum scored 21 as the Lakers shot 52% from the floor.

It looked ridiculously easy for the Lakers. Too easy. While the final score was 118-110, that only happened thanks to the Hawks pouring in a 34-point fourth quarter.

And this was without Pau Gasol in uniform. Easy to see that they weren’t happy about the loss to the Mavericks on Friday night. You get the feeling the only team that can stop the Lakers are the Lakers themselves. Or, perhaps Denver, if Melo can keep up this insanity. So all over the Melo train right now. It feels so, so good to watch him playing like this, where it’s easy and he’s dominating and looks like he’s having fun.

Game of the night was definitely the Memphis/Denver contest, with the Nuggets winning 133-123. Melo finishes with 42 points, O.J. Mayo notches a career-high 40 and the Nuggets move to 3-0 on the season.

37.7. This is Melo’s point-per-game average through three contests this season. It’s early, but damn I hope he keeps it up.

I’d like to bump them up to that second spot in the Western Conference. People made fun of me for thinking they’d be great, but they certainly look good through four games. I really don’t know if anyone can stop Melo if he continues to keep his eye on the prize and his focus right.

Trippy, trippy to see Joey Graham out there. I’m used to Sonny Weems now, and he looks so much like the Graham twins, that I still do a second glance every time I see Joey.

I didn’t see the Celtics take down the Hornets, but Chris Paul and Rajon Rondo had some words? If you saw the game, fill us in, because I’m hearing/reading that Paul followed the Celtics after the game and Byron Scott had to go “retrieve” him. Here’s a clip from the game.

I don’t really know what to make of the Hornets so far this season. I know I feel badly for Chris Paul and want him to be on a winning team, he’s too good not to be. The Celtics won the game last night 97-87, with Paul Pierce scoring 27 points on 10-14 shooting.

Was surprised to see the Heat take down the Bulls, 95-87. Mr. Dwyane Wade scored his 10,000th career point in this one and they got the victory. I had the Heat falling this season. Had them in the playoffs, because you never count out a team with a player like Dwyane Wade, but I didn’t like their makeup. They’ve started the season 3-0, so what do I know? Luol Deng had 26 in the loss. So happy he’s back. Udonis Haslem had 19 points and 11 boards for the Heat while Wade finished with 25.

Jermaine O’Neal broke his nose in the game, but said he doesn’t expect to miss any time or wear a face mask. Yipes.

The Blazers lost a tough game on Saturday night, but came back to get the 83-74 victory over the Thunder last night. It was a horrific shooting night for Kevin Durant who finished just 3-21 from the floor.

The Suns took down the TWolves, 120-112 and they were led by their new stud, Channing Frye. My goodness. Frye finished with 25 points, including six made threes. Steve Nash finished with 14 points and 14 assists as Grant Hill continuesto defy all laws of aging  and rewrite his playing history with 23 points. Ryan Gomes finished with 23 points on 10-13 shooting to go along with 15 rebounds.

Yesterday was a day where I missed a bit of action, because I was at the arena doing work stuff for the Raptors/Magic game. Getting home to catch the end of the Memphis/Denver game and then watching the Lakers/Hawks and seeing 42, 41, and 40 from Melo, Kobe and Mayo made me smile. It’s like three waves of greatness. Yes, I still think Mayo will get there.