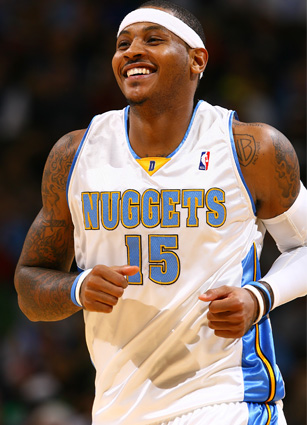 Love doing these liveblogs but I miss lots of action on Tuesday and Wednesday nights.

You know what I didn’t miss? Melo dominating the Raptors, scoring 32 points in 30 minutes on 12-for-15 shooting. Oh yes, he was in fine form. Didn’t even attempt a three-pointer. He’s so much fun to watch when he is playing at this level. He will not be denied when he goes to the hoop and if you do choose to double him? Have fun, he’s become a very patient and willing passer who finds his bigmen open under the hoop for the easy dunk.

Not even sure how many three-point plays the Nuggets had against the Raps last night, particularly in the third quarter where they blew open a game that was tied at the half. Besides the second half collapse –a result of the altitude, or just the Nuggets, I don’t know. I’m saying a combo– the effort was a solid one for the Raptors in the first half, especially without Hedo Turkoglu who was sitting on the sidelines in a suit, with that sore hip that he hurt in the game against the Bulls in Toronto last week.

Solid game for DeMar DeRozan, finishing with 17 points for the team. Frustrating game for Chris Bosh who finished with just two free throw attempts and also a technical after slamming down the ball in frustration over a noncall. JR Smith and Kenyon Martin have to be two of the most annoying players to play against in the L. JR bowing and blowing kisses to the crowd when they are up 20, Kenyon screaming into your face after he draws the foul? Yikes.

Also, Raptors fans: Pops Mensah-Bonsu is back! Whooo. I know you’re all excited over this. I’m happy to see one of the nicest guys I’ve ever encountered in this league find a team. Here’s to hoping he sticks for the rest of the season.

Kobe. Bean. Bryant. 100 career 40-point games. Kinda silly. He got to that milestone after draining a three for the Lakers final points in a victory over the Pistons. It’s so wild sometimes to stop and think about the years in his career. I was 12 years old when I started watching him do this NBA thing. I was learning the game as a fan as much as he was learning to play the pro game as a rookie. Through the ups and the downs, struggles and superstardom, fall from grace –oh how ugly that was, particularly as a young girl trying to understand a way of the world that just didn’t compute with my morals– and then finally his redemption, I got closer and closer to the game as Kobe got –and continues to get– closer to greatness. It’s why he’s woven so deeply into the fabric that makes up my basketball mosaic and it’s why I’ll forever be thankful for his journey, because in a way, it shaped my own.

Who were your guys, the ones that you feel you’ve grown up with, with respect to the game?

10-2. This is the record of the Phoenix Suns, aka the first team to read 10 victories. Kinda crazy, I know. Took down Houston last night in a close one. Steve Nash once again came up huge, scoring 12 points but dishing out 16 assists as he got all of his teammates involved offensively. On the other side of things, Aaron Brooks had 13 assists of his own while Carl Landry had 27 points and nine rebounds for the Rockets who continue to impress, even in a losing effort.

26 and 16 for Brook Lopez, 27 points for CDR and still, the Nets lose. 0-11. I’m feeling awful for these guys. Just want them to get the W. It feels a little worse each day and yet, I still feel better about this team than I do about both the Nets and Warriors.

OKC smoked Miami on their homefloor this evening, taking them down 100-87. One night after discussing with a friend that I wished KD could distribute the ball more, the guy pours in a line of 32 points, nine rebounds and five assists. Okay, KD, I’ll try my best not to doubt you anymore, please forgive me. Russ Westbrook had a nice game as well, scoring 24 points to go with seven assists.

And one way I’ve discovered for Anthony Randolph to get playing time for my fantasy team? Get the Warriors to stick with a seven-man rotation. Damn GS. Figure that ish out. Guys are dropping by the day. Thoughts and prayers go out to Kelenna Azubuike who will miss the rest of the season as he undergoes surgery for a torn patellar tendon in his left knee. Also thinking of my man SL in Oklahoma who had to undergo arthroscopic surgery on his knee and is said to be sidelined for 3-4 weeks. My stomach (and heart) doesn’t deal well with news involving surgery and Livingston, so I’m really sending wishes for a speedy recovery his way.