The Grizzlies took down the Spurs while the Hawks dominated the Cavs on Wednesday. 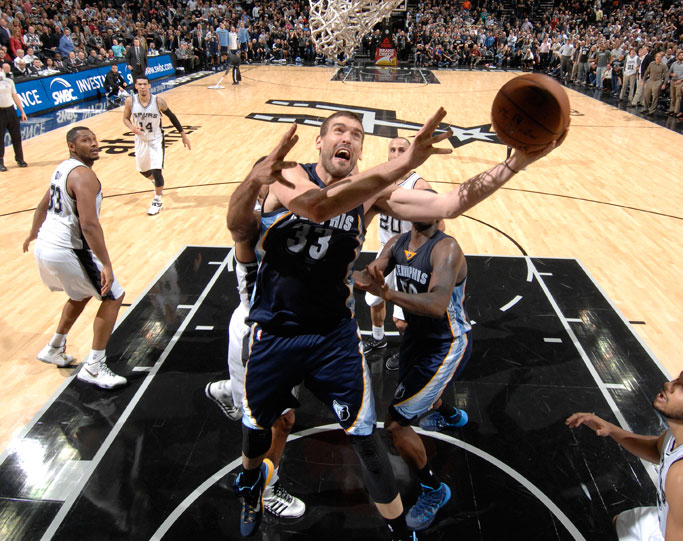 Luck has not been on the Suns’ side during their recent six-game losing streak. However, they were able to find their touch Wednesday night as they broke that streak and handed the Hornets their 19th loss of the season. The four-headed guard scoring machine of Eric Bledsoe (15 points), Goran Dragic (20 points, 8 assists), Isaiah Thomas (23 points, 3-8 on 3-pointers) and Gerald Green (16 points, 5 rebounds) came through for Phoenix as Thomas reached the 20-point plateau for the second straight game. They needed all their scoring since Markieff Morris (13 points, 8 rebounds) was ejected in the third quarter for arguing. Charlotte actually led 50-33 with 7:01 left in the second quarter. Gary Neal (13 points) had a quick eight points to start the second quarter while Al Jefferson (28 points, 10 rebounds) and Kemba Walker (27 points, 7 assists) had solid starts to their night. Just as has hurt the Hornets all season long, though, this game was decided down the stretch. The Suns ended this game outscoring the Hornets 10-2 in the final two minutes and thirty seconds. Phoenix got the stops they needed while Charlotte’s defense couldn’t hold its ground.

These Hawks are a legitimate contender in the East. They have won 11 of their last 12, only lost two home games and sit 1.5 games out of first place in their conference. Wednesday night, they handed the Cavs their worst loss of the season thanks to reserve Shelvin Mack (career-high 24 points, 22 minutes) going berserk and becoming unconscious from deep. The game’s deciding factor had to be 3-point shooting. The Cavs shot 8-30 (26.7 percent) on threes while the Hawks shot a ridiculous 16-28 (57.1 percent) from behind the 3-point line. Mack led the way in this statistic, making all six of his attempts from deep. Swingmen DeMarre Carroll (13 points, 3-6 on 3-pointers) and Mike Scott (15 points, 2-3 in 3-pointers) got in on the action as well. Oh yeah—and the Hawks did all this without starting point guard Jeff Teague (hamstring). Dennis Schroder (10 points, 10 assists, 1 turnover) did a very good job in his absence, picking up a double-double. Dion Waiters (21 points) reached the 20-point plateau while LeBron James (21 points) reached it as well without even playing in the fourth quarter when the game had been all but decided. After trailing 50-38 midway through the second quarter, the Hawks blitzed past the Cavaliers, outscoring them 89-48 the rest of the way. Atlanta ended the game shooting 64.5 percent from the field. Pay attention to Al Horford (20 points, 10-14 from the field) and the Hawks, folks, they might have something special brewing in Georgia.

The Celtics outscored the Magic in all four quarters Wednesday night, clamped down defensively in the second half and couldn’t seem to miss a shot in the closing quarter. Rajon Rondo (13 points, 15 assists, 7 rebounds) remained the quarterback for this Boston offense, despite the sudden swirling trade rumors. No one in the NBA has more games this season with at least 15 assists than Rondo. He received plenty of help from his teammates, especially Brandon Bass (18 points, 6-10 from the field, 6-6 on free throws). The Magic had four starters and one bench player in double digit scoring but Nikola Vucevic (18 points, 13 rebounds) and Tobias Harris (17 points, 3 steals) let this one get away in the final quarter in which the Celtics outscored their team 31-19. Boston shot a blistering 13-19 (68.4 percent) in the final 12 minutes. Right after they seemingly made a push for the eight seed in the East, the Magic have now lost four of their past five.

Chandler Parsons (season-high 32 points, 7 rebounds, 2 steals) has had plenty of ups and downs since his transition from Houston to Dallas. His energy hasn’t always been there while his shot has been anything but consistent. Wednesday night against the Pistons, though, showed the Parsons the Mavs hope to see more of. He scored a season-high in points, pouring in 15 of them in the third quarter. He had plenty of help from Tyson Chandler (16 points, 9 rebounds) Monta Ellis (25 points, 8 assists), who continues to find his way into the lane. And then when the game was on the line in the fourth quarter, Dallas went to a source of offense they knew they could count on in Dirk Nowitzki (18 points, 10 rebounds). After D.J. Augustin (10 points) nailed a 3-pointer to make Detroit’s deficit only 101-95 with 3:35 to go, the Big German scored seven of Dallas’ next 10 points, capped off by a beautiful rainbow 3-pointer. The Pistons wouldn’t be able to recover. Even though the Pistons still can’t seem to find their winning ways, Andre Drummond (19 points, 24 rebounds, 3 blocks, 4 steals) has started to turn his season around and look like the player so many NBA junkies were excited to see this season.

Dwyane Wade (42 points, 12-19 from the field, 16-21 on free throws) had one of his best games since before LeBron James came to town back in 2010. The shooting guard shot efficiently from all over the field while forcing his way to the free throw line time and time again. Unfortunately for Wade, he had absolutely no help from his teammates. Mario Chalmers (11 points, 3-13 from the field) was the only other Heat player in double figures, and the former Kansas point guard needed 13 shots to reach 11 points. Behind strong play from the starting lineup, especially Gordon Hayward (29 points, 7 assists, 6 rebounds), the Jazz built a 33-16 lead after the first 12 minutes and lever gave up the lead the rest of the way. Without Chris Bosh (calf), the Heat just don’t have enough legitimate offensive options.

The Nets never stood a chance against the best team in the East and the opponent they took down in last year’s playoffs. (And in heartbreak fashion at that.) Wednesday’s game, though, got off to a great start for the visiting Nets on Drake Night, as Mirza Teletovic (14 points, 4-8 on 3-pointers) and Joe Johnson (17 points, 8 rebounds) scored 14 of the team’s first 30 points and helped Brooklyn build an 11-point lead. Kyle Lowry (20 points, 12 assists) turned up the heat in the second quarter and second half, finishing with another 20-10 performance. The Raptors are one of the best fourth-quarter teams in the NBA, and they showed that against the Nets, outscoring them 29-16 in the final quarter. (Brooklyn also had a lot of self-inflicted wounds, giving away six turnovers in the fourth quarter.) Big men Jonas Valanciunas (16 points, 10 rebounds) and Amir Johnson (13 points, 9 rebounds) both played key roles down the stretch. These two seem to balance and play off each other very well. The Raptors next game is against the Pistons on Friday.

This was the game of the night and possibly the game of the year (so far). These two Southwest Division foes and legitimate championship contenders gave their all for 63 minutes of gritty, high-quality basketball. There were countless big shots and big stops for both teams, as neither wanted to let this one slip away. The wildest moment came from Marc Gasol (26 points, 9 rebounds), as he banked in a leaning, one-footed 3-pointer buzzer beater to send this game into its first overtime. However, after a big 3-point shot from Courtney Lee (14 points), Tim Duncan (23 points, 16 rebounds, 5 assists, 3 blocks, 2 steals) matched Gasol with his own leaning bank shot to push it to a third overtime. In the third and final overtime of this slugfest, Zach Randolph (21 points, 21 rebounds) scored all six of his Grizzlies’ points and snagged two big rebounds as well. Manu Ginobili (21 points, 8 assists, 8 rebounds) missed a 3-pointer in the closing seconds that would have given San Antonio the victory. Danny Green (25 points, 5 blocks, 7-13 on 3-pointers) had the green light from distance on the night while Boris Diaw (17 points, 13 rebounds, 5 assists) had one of his most balanced games of the year. The Grizzlies received their own 3-point boost from veteran Vince Carter (18 points, 3 steals, 5-9 on 3-pointers) as seems to be coming alive. After reaching double digits only once in his first 21 games with Memphis, Vinsanity has now done so in each of the past two games—both big wins against the Warriors and Spurs. If Carter can keep this up, the Grizzlies just found an important 3-point shooting, bench scoring piece to their championship puzzle.

Life without Jabari Parker (knee) got off to a rocky start for the Bucks, as they couldn’t find a way to contain the Blazers’ bigs on the night. Thomas Robinson (15 points, 16 rebounds) had a monster performance in his very first NBA start, replacing injured center Robin Lopez (hand). Other than his horrid free throw shooting, Robinson might just be a respectable replacement for the time being. Robinson LaMarcus Aldrdige (23 points, 15 rebounds) both played a key role in helping the Blazers outrebound the Bucks 52-32, allowing Portland to hoist 10 more shots than its opponent. Brandon Knight (24 points) and Khris Middleton (17 points) each held their own on the night, but it will be tough to replace what they lost in what was going to be the Rookie of the Year. Damian Lillard (29 points, 7 assists) also had a big game for Portland as he helped his team overcome a double-digit deficit and claim their 20th win of the year.

The Clippers were able to sneak by the Pacers because of DeAndre Jordan (15 points, 23 rebounds) and Blake Griffin (31 points, 16 rebounds, 5 assists) never giving up on a play. These two combined to snatch 14 offensive rebounds—as many offensive rebounds as the entire Pacers team grabbed. While holding a slim 99-98 lead with under a minute to go, the Clippers needed to get a stop. After Rodney Stuckey (12 points) missed a jumper, Jordan skied for his final rebound of the night, leading to two free throws that extended the Clippers’ lead to three points. Chris Paul (20 points, 9 assists, 6 rebounds, 5 steals) almost had another 20-10 game in helping Los Angeles win for the 11th time in the last 13 games. The Pacers had seven players in double figures, led by C.J. Miles (17 points) and David West (17 points, 10 rebounds, 2 steals). As a team, they just turned ice cold down the stretch and only made three field goals in the final six minutes.

MVP candidate James Harden (41 points, 10 assists) might have allowed Arron Afflalo (22 points) to knock down a game-tying, buzzer-beating 3-pointer to send this one into overtime. However, he more than made up for it in the extra five minutes of basketball. After Danilo Gallinari (16 points, 4-8 on 3-pointers) made a 3-pointer with 2:43 left in overtime, the Nuggets led 104-103. The Beard then went on to score eight straight points for the Rockets and give his team a 111-108 lead with just under 24 seconds to go in the game. Patrick Beverley (12 points, 12 rebounds) would make four straight free throws to close this one out and put the Rockets one victory away from their 20th win of the year. Dwight Howard (24 points, 16 rebounds, 4 blocks) had a monster double-double while Donatas Motiejunas (18 points, 6 rebounds) remained a reliable source of offense in the wake of D12’s recent return to the starting lineup. For the Nuggets, Ty Lawson (12 points, 16 assists) had a great game as a distributor while Wilson Chandler (23 points, 6 rebounds) had the touch from deep. The issue has to be the team defense and lack of interior presence. Kenneth Faried (11 points, 11 rebounds) has been in a weird funk for most of the season and Timofey Mozgov (1 point, 6 rebounds) can only give you so much. They’ll need to find some way to make more stops late in games if they want a chance of finding success. 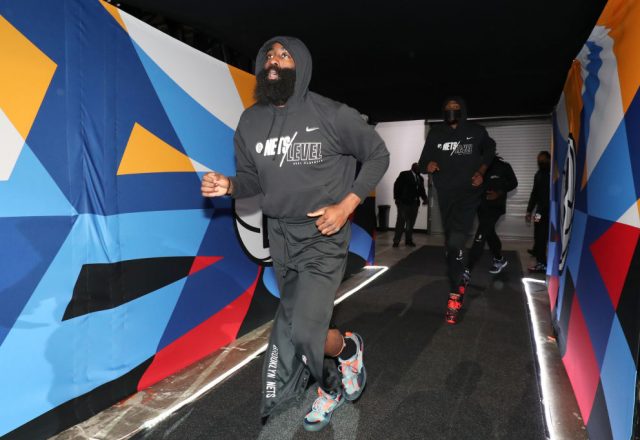