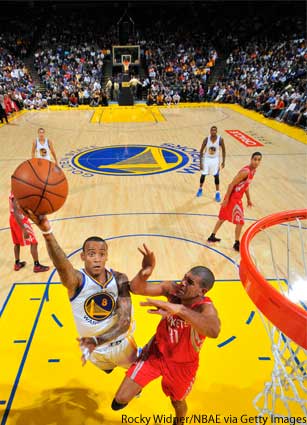 A new era of New York basketball begins with a W. The Knicks were ahead for most of this one (they led by 16 early but squandered the lead before halftime), and they closed out the fourth behind a slew of Amar’e Stoudemire buckets. STAT finished with 19 and 10. Wilson Chandler was great, dropping 22 on 10 of 18 from the field and playing tough second half D on Andrea Bargnani, who was held to 22 after putting in 18 through the first two quarters. Five Knicks scored in double figures, though at times their offensive and defensive chemistry looked off—a problem they’ll need to fix if they’re to have a chance against the next few opponents (Celtics, Blazers, Magic, Bulls).

A pretty good night for NY-area hoops teams, huh? Like the Knicks, the Nets also got a win, something that took them 19 games to do last season. Brook Lopez and Devin Harris had 25 and 22, respectively, and my favorite fantasy sleeper Anthony Morrow drilled a trey with 26 seconds to go that put New Jersey ahead for good. Derrick Favors might be a project, but he showed some potential, scoring 8 points and grabbing 7 boards in the first half before a quiet second one. Not that I don’t love sitting here and writing The Post Up, but something tells me I’d rather be at Mikhail Prokhorov’s post-game celebration (jet skis on the reg, I assume) at the moment. No Piston scored more than 14, which pretty much sums this one up.

Presumably fatigued from last night’s battle against the Heat, the Celtics fell to an energetic Cavs team carried all night by The Q’s raucous crowd. With Mo Williams sidelined with a groin injury, J.J. Hickson scored 22 on 8-11 shooting and Daniel Gibson dropped a cool 16. Rajon Rondo led Boston in scoring (a problem in itself) with 18, while the rest of the C’s were too quiet (or too tired) as the game slipped away in the final minutes.

LeBron James and Co. rebounded nicely to last night’s mess with a much-needed first W over the 76ers in Philly. LBJ put up 16-6-7, while Dwyane Wade led the team in scoring (30) and  James Jones filled the lost Mike Miller role well nicely with 20 points and 6 threes. In his debut game, Evan Turner came off the bench, showed some promise and scored 16 (in that order, I imagine). Lou Williams and Thaddeus Young both put in 15, and the latter threw down one of the nastiest dunks I’ve seen in, well, minutes, but I watch a lot of hoops. The Sixers host the Hawks on Friday.

The League’s most consistent duo of Dirk Nowitzki (28 points, 13 boards) and Jason Kidd (12 points, 18 assists) did what they do, jumping out to a 16-0 lead in the first and then flying ahead in the third after the Bobcats clawed back. Tyrus Thomas (!) led Charlotte with 22, and Gerald Wallace scored 16 and grabbed 9 boards. After 13 meetings, the Mavs are still undefeated against the ‘Cats.

With Marc Gasol sidelined (right ankle sprain) and Zach Randolph missing the second half with a back injury, the Grizz just couldn’t keep up with the Hawks last night. Joe Johnson led Atlanta with 22, while Zaza Pachulia dropped 17 and made me scream “ZAZA!” six times.

The Spurs won, and won comfortably, so I guess I should lead off with them, but some of these Pacers’ stats are jumping off the page so I’m going there first. Roy Hibbert went for 28 and 9 and finally seems to be coming around, Danny Granger looked healthy as ever and put in 26, and the newly-acquired Darren Collison scored 19 and dished 7 assists. But yeah, the Spurs won, and Tim Duncan (23 points), Manu Ginobili (22) and Tony Parker (20) were all solid. Still unsure why people keep underrating their chances to hit the Western Conference Finals this season.

The night’s first nationally televised game was a good one, as Kevin Durant scored 30 and Russell Westbrook put together a great stat line (28-10-6) and, somehow, did this (to which I had to respond with this). Derrick Rose was also incredible, dropping 28 with some crazy reverse lay-ups, while Joakim Noah (18 and 19) was a beast, though it wasn’t enough. Through one, OKC looks ready to live up to the hype.

No ‘Reke, no problem. With Tyreke Evans fulfilling a one-game suspension for getting his NASCAR on over the summer, the Kings still held on late in Minnesota. Francisco Garcia and Carl Landry each scored 22, and rookie big man DeMarcus Cousins went for 14 and 8 in his debut. Luke Ridnour led the TWolves with 20.

Despite all the offseason, off-the-court nonsense, the Nuggets came out firing last night. Carmelo Anthony and Arron Afflalo had 23 and 22, respectively, and Shelden Williams (!!!) grabbed 16 rebounds. The Jazz just didn’t bring it on the offensive end (Deron Williams‘ 17 points led the team), and pretty simply, they’ll need to shoot better—38.6% won’t cut it against the West’s best.

A comeback game, of sorts. For the Hornets, the return of Chris Paul, who dropped 16 points and 17 dimes and led the team to a strong first win. For the Bucks, the return of Andrew Bogut, whose 15 points and 15 boards automatically means Milwaukee will be a force in the East this season. New Orleans ended the third quarter with an 11-0 run, but couldn’t officially put Bucks away until the final minute of play. Brandon Jennings was alright (15 points, 10 assists), but CP3 got the better of him this time. Excited to see how each of these squads progresses over the couple of months.

Monta Ellis went off. OFF. In what was unquestionably the best shooting night of his career, he scored 46 points on only 24 shots from the field, with 3 rebounds and 2 steals just because. Stephen Curry (23 pts, 12 assists) and David Lee (16 pts, 15 boards) both went for double-doubles, but this was Monta’s night, and everyone in Oracle Arena knew it. For the Rockets, Luis Scola managed 36 points and 16 rebounds, while Kevin Martin went 17-17 from the line as he dropped in 28. For you late-night League Passers, GSW might become a must-watch, as every one of their games has the potential to be a 260-total-point shootout.

Welcome to the L, Blake Griffin. Strong first game for the forward, with 20 points and 14 rebounds, but LAC wasn’t able to match the Blazers’ output. All five Portland starters scored in double figures, led by Brandon Roy, who had 22 and a pair of buzzer beaters to end both of the first two quarters.

Performance of the night: Monta Ellis: 46 points, 18-24 FGM-A, 3 rebounds, 3 assists and 2 steals.
Moment of the night: Blake Griffin making himself known in the game’s first few minutes with a series of ridiculous put-back slams. Your move, Mr. Wall.

And sleep well have a great day, Cleveland.