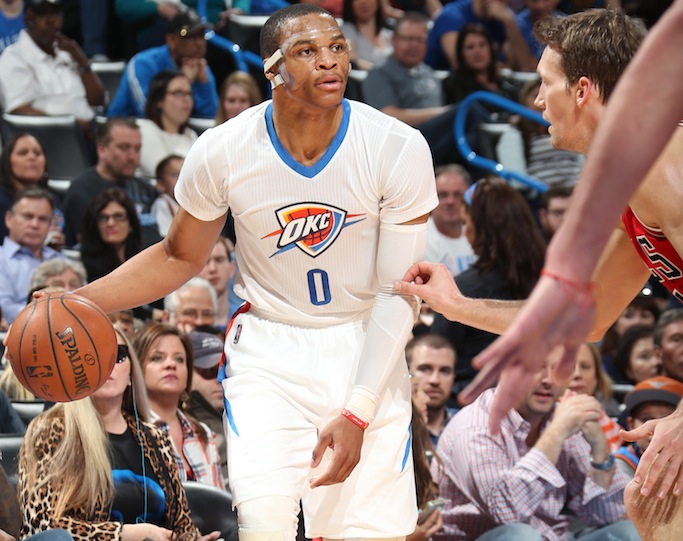 This was one of the most exciting games all year. Chicago and OKC went back and forth for 47 minutes until a triple by Anthony Morrow gave the Thunder some late separation.

The clutch three was set up by a perfect feed from Russell Westbrook. It was just a small part of No. 0’s absurd fourth quarter — he was everywhere on defense and attacked the rim with impossible aggressiveness. He finished with a cool 36 points, 11 boards and 6 assists.

Chicago got 27 from a red hot Nikola Mirotic and 20 more from Pau Gasol in the loss.

Houston led by 10 early in the fourth last night, but the Clippers made a late push to make things real interesting. LA was within a point with 1:35 left, but a series of strange fouls and awkward offensive possessions did them in.

James Harden led all scorers with 34. He made 17/18 free throws, grabbed 7 boards and handed out 7 assists. Trevor Ariza added 19, and Terrence Jones went for 16 and 12 (and hit a late go-ahead three).

Yet another incredible game featuring one of the NBA’s brightest stars. New Orleans and Denver traded buckets for the last three minutes of last night’s regulation, and sent the game into OT at 101. Will Barton knocked down a huge three at the end of overtime to force a sixth period, where the Nuggets ran away with it.

Barton dropped 25 with 9 boards. He’s been great since coming over in the Arron Afflalo deal. Kenneth Faried added 20 and 10.

Anthony Davis was unbelievable for New Orleans in the loss. He hit 16/28 shots to finish with 36 points, 14 boards, 7 assists and 9 blocks. He sank a number of clutch jumpers, and his midrange J is looking like one of the League’s sharpest. He dropped 43 earlier this week. He is 22 years old. (Tyreke Evans was great, too, narrowly missing a triple-double with 25, 10 and 9.)

A 40-point second quarter by the Cavs sprung an easy win yesterday. Kyrie Irving led the team with 33, while LeBron scored 21 points (9/14) with 13 assists and 8 rebounds.

Easy one for the Spurs last night. Nobody played more than 25 minutes in the blowout W, and all 13 guys scored.

Zach LaVine dropped 18, 6 and 6 for Minnesota in the loss. Andrew Wiggins chipped in 13 and 5.

LaMarcus Aldridge and Damian Lillard were both hot last night in a surprisingly easy road win. LA went for 24 and 10 and Lillard added 23. Nicolas Batum posted 10 points, 12 assists and 3 steals.

The Lakers were down 80-65 with seven minutes left last night before a crazy 18-5 fourth quarter run. They were within a couple of points in the closing minute, but couldn’t get any closer than that.

Dennis Schroder started for Atlanta with Jeff Teague sitting, and dropped 24 with 10 assists. Al Horford added 21, and Shelvin Mack went for 18 off the bench.

LA’s leading scorers were Carlos Boozer and Ryan Kelly with 13 each.

The Knicks led by nine in the second quarter before crumbling in the third last night.

Eric Bledsoe and Marcus Morris each cleared 20 points for Phoenix. Bledsoe fell one board short of a triple-double, continuing yesterday’s bizarre trend of dudes posting double-doubles with 9 of something else. Brandan Wright scored 18 with 11 rebounds.

Alexey Shved and Andrea Bargnani each scored 18 for New York.