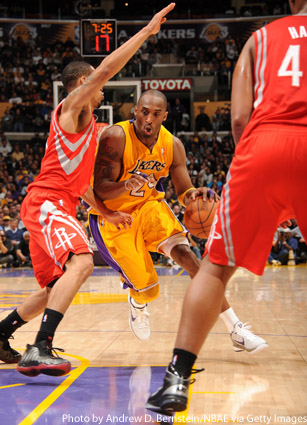 With Emeka Okafor sitting out, Jason Smith got the start for the Hornets, and dude took full advantage. In 25 minutes of action, Smith led the Hornets with 20 points, shooting 9-11 from the field and assisting them handily as they took care of the Wizards at home. The Wiz have still found zero success on the road—they’re 0-25 outside of DC—and they don’t have another away game until Feb. 13, when their bout with the Cavs should be the ideal opportunity to get that elusive W. Nick Young dropped a 30 spot for Washington last night, but John Wall had an off game, shooting 2-10 and putting in only 4 points.

After a rough first half, the Celtics quickly erased the Kings’ 9-point halftime lead in the third and took care of business from there. Ray Allen, who delivered a feisty mid-game speech, led the C’s with 22, while Rajon Rondo scored 17, dished 10 and swiped 4. (He also scuffled with DeMarcus Cousins, which resulted in a T for the point guard.) With their four-game road trip all wrapped up, the Celts with finally return home to face the Mavs on Friday.

Quick backstory: I was randomly reading (well, re-reading) through SLAM 117 (May ’08) last week, and I came across a feature on the Blazers—written by FreeDarko’s Bethlehem Shoals—about how the team refused to die during ’07-08, and found strange and seemingly unexplainable ways to remain relevant and in the Playoff hunt after the (first) Greg Oden injury news. So, two things: 1) That’s gotta be one of the few features that, after a few names were swapped in and out, could’ve been re-ran word-for-word every one of the past three years. Each season, the Blazers lose a few hugely important players to injury; each season, Greg Oden is one of them; and each season, the team remains in the hunt until the very end of the year or right into the postseason. 2) One of—or the—main reasons for this success is continuously LaMarcus Aldridge, who has been a source of steadiness even as Oden and Brandon Roy’s bodies have fallen apart. Applaud that man.

Which brings us to last night’s game, during which Aldridge, reliable as ever, put the Blazers on his back and carried an undermanned squad over the League’s best. He put in a career-high 40 points, which were accompanied by 11 boards and 3 steals. The most damage was done during the fourth, when Portland turned a tie into a 13-point lead and a quality victory. Manu Ginobili scored 17 points for the Spurs, who are still atop the NBA with a 40-8 record. So yeah, they’ll be OK. And, somehow, so will the Blazers.

Struggling as of late, the Lakers really needed a win to get back on the right path. And though it was close, they accomplished their goal, taking down the Rockets in overtime. Lamar Odom (20 points, 20 boards) clanked a buzzer-beating, game-winning attempt in regulation, but LAL dominated OT, receiving clutch down-the-stretch buckets from Kobe Bryant (32 points, 11 dimes) and Pau Gasol (26 points, 16 boards). Houston, led by Kevin Martin and his 30 points, did all they could to keep up, but the Lakers’ variety of weapons and intense will proved too much. The Rockets are in Utah tonight, while the Lake Show will have another tough one when they host the Spurs tomorrow night.