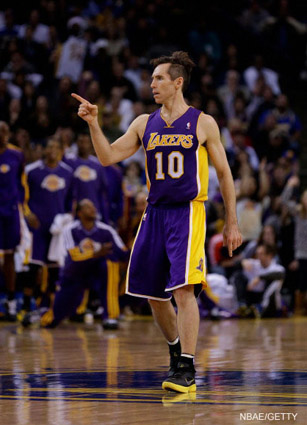 It wasn’t exactly the most thrilling slate of games last night, but Damian Lillard helped the Blazers win a close one and the Lakers got a big win on the road.

After getting demolished by Detroit on Friday night, the Wiz came out flat again on Saturday. They scored just 13 points in the first quarter and trailed by 19 points at the break. They made it look close in the second half, but this was a terrible game for Washington.

They made under 38 percent of their shots from the floor, including 4/21 threes. Jordan Crawford actually played an efficient game. He made just 4-of-13 shots, but added 11-of-12 free throws and finished with 21 points. Emeka Okafor double-doubled. However, they got out-rebounded by 15.

That had a lot to do with Andre Drummond, who had 11 rebounds. It’s his second game in as many nights with double-digit boards. Charlie Villanueva was Detroit’s high-scorer with 19. Greg Monroe went for 13 & 8.

Al Horford led the team with 20 points off 9-of-12 shooting and added 10 boards. Every Atlanta starter had double-digit points and they crushed Chicago on the glass (45-31).

Nobody on the Bulls scored more than 11 points. Luol Deng was the high-man, but he made just 5-of-14 shots. Joakim Noah went for 10 points and 9 boards, though he turned the ball over 6 times.

Utah made just 41.1 percent of their shots, compared to 52.1 percent for Miami. Marvin Williams led the Jazz in scoring—generally a bad sign. Al Jefferson and Paul Millsap combined to make 5/17 shots—always a bad sign. Jefferson did grab 11 rebounds and block 2 shots.

Pacers (16-12) 81, Hornets (5-22) 75
The Pacers scored just 29 points in the first half, and trailed by 17 at the break. But an amazingly brutal 7-point third quarter for New Orleans allowed Indy to get back in the game. The Hornets led by five with roughly four minutes to play before the Pacers closed the game on a 16-5 run.

Robin Lopez played a great game for the Hornets. He scored 24 points on 16 shots, and tallied 11 boards, 6 blocks and 2 steals. Anthony Davis made just 5/14 shots, but finished with 10 points, 9 rebounds and a block. He’s been a productive-but-not-great player so far, though I think he’s primed for a big second half of the season.

Rockets (14-12) 121, Grizzlies (18-7) 96
Houston is a weird enough team to play this type of game from time to time. They have a bunch of young, talented players, and once in a while they click in a big way. Last night they did just that.

James Harden made 9-of-13 shots from the floor on his way to 31 points. Jeremy Lin was sharp with 15 points and 11 dimes. Omer Asik posted 14 points, 12 boards and a block. Marcus Morris, Greg Smith, Carlos Delfino and Toney Douglas each scored at least 10 points as well.

As a team, the Rockets made nearly 54 percent of their shots and 12-of-28 threes. They also made 21 free throws.

The Grizzlies got double-digit points from five players, but none of them scored more than 16 (Mike Conley). Rudy Gay attempted just 6 shots and finished with 6 points in 29 minutes. The Grizz actually made over 53 percent of their shots, but 19 turnovers and 2-of-13 shooting from downtown did them in.

The Cavs, on the other hand, got at least ten out of six guys. Tristan Thompson and Tyler Zeller continued to play well in Anderson Varejao’s absence. Both guys double-doubled. Dion Waiters led Cleveland in scoring with 18 in the fairly easy win.

Last night, Denver put Charlotte out of their misery early. They led by 18 at halftime before closing the game out in the second half. Denver made 14 more shots from the floor on 5 more attempts than the Bobcats. That’s bad news for Charlotte. Denver also scored an absurd 78 points in the paint.

Kosta Koufos led the team in scoring with 16, though six others joined him in double-figures. Kenneth Faried posted 15 points, 9 boards, 4 assists, 3 blocks and 2 steals.

The Bobcats got 16 points and 14 rebounds out of Byron Mullens. However, Kemba Walker, Jeffery Taylor and Reggie Williams—two starters and the sixth man—combined to shoot 10-for-37 with 22 points.

Suns (11-16) 93, Blazers (13-12) 96
Finally, an interesting game. This one was tied at 75 to start the fourth quarter. With 38 seconds left, a Jared Dudley bucket cut a Blazers lead to three. Damian Lillard missed a jumper, giving Phoenix a chance late. However, Goran Dragic missed a three, ending the game.

Lillard led Portland with 25 points on 13 shots. He made 9-of-10 free throws and added 7 assists. JJ Hickson had a big game, too, scoring 19 points on 8/11 shooting with 15 rebounds. LaMarcus Aldridge added 17 & 9. Portland’s won five straight.

Dragic had an off night for the Suns, as he finished with 10 points on 13 shots with 5 assists. Marcin Gortat led the team with 18 points and 9 boards. Dudley made just 3-of-7 shots, but bizarrely tallied 10 assists. Michael Beasley made just 1/4 shots in 10 minutes off the bench. The Suns must be kicking themselves for signing him this offseason.

Lakers (13-14) 118, Warriors (18-10) 115
Finally, a really interesting game. This was actually a blowout entering the fourth quarter, before the Lakers erased a 13-point Golden State lead.

LA opened the period on a 14-3 run. Golden State held them off for a while, but with 24 seconds left, Metta World Peace knocked down a go-ahead three. But Jarrett Jack answered, and tied the game with 14 seconds left. Kobe Bryant missed a late jumper to send the game into overtime.

In OT, the Lakers led by three with 16 seconds left after Steve Nash, playing his first game since Halloween, hit a 14-footer. Stephen Curry couldn’t convert on a game-tying three, and after a Festus Ezeli offensive board led to a turnover, the game was over.

Nash finished with 12 points and 9 dimes. Kobe scored 34 points, but needed a season-high 41 shots to do it. Bryant would have done a lot more with 41 shots against a mediocre defense a few years ago. Dwight Howard and Pau Gasol combined for just 20 points. DH fouled out after 29 minutes.

Jack was huge for the Ws, coming off the bench for 29 points and 11 dimes. He’s turned out to be an excellent acquisition for Mark Jackson’s club. Curry scored 20 with 8 boards, 7 dimes and 4 steals. David Lee double-doubled with 20 and 11.

The last seven minutes of this game were absolutely nuts, so be sure to check out the highlights below!