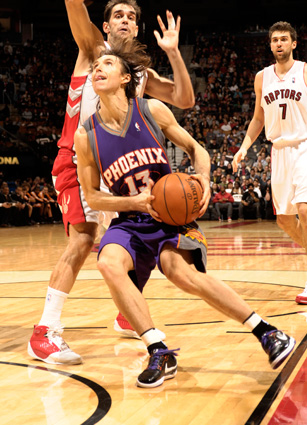 I’m sure you’ve been wondering where the heck the Post Up has gone. Well it’s back. Kinda.

I was pretty sick last week –as you know, I don’t deal well with being sick– and yesterday’s Raptors/Suns game was my first real foray back into the real world after a week in bed. I did practice on Saturday and that wiped me out… The game yesterday had me worn out and yawning before 8 p.m. last night!

Anyway, sorry for going MIA on you. I’m slowly getting back on track. Just need a little more sleep and time and we’ll be back to normal.

What did we miss when I was out? Hmm.

Last night the Suns pounded the Raptors 113-94. Steve Nash, aka Kid Canada, according to Grant Hill, was phenomenal. 20 points, 16 assists and some of the passes his teammates didn’t convert were even prettier than the 16 that they did. His eyes. I’d like his eyes for just one day. Not just his eyes but his awareness. That sense he’s got that tells him not just where people are (including the ones behind him), but where they are going to be. As Hill said yesterday, the Suns are spoiled, taking 20 and 16 as an “average game”.

Nash is now averaging over 12 assists per game.

He hears this all of the time. It’s got to get a little annoying to constantly have people remind you of your age. Even when you’re balling, as Steve most definitely is. Yesterday though, he was happy, smiling, comfortable as ever. Canada truly is his home and it is so very proud of Mr. Nash.

Don’t look now, but the Suns have tied the franchise record for best start at 14-3. Didn’t see that one coming.

Lawrence Frank and the Nets. We knew it was coming and still, I felt awful. Chris Douglas-Roberts’ tweet made me feel worse. It’s always the coach to go and can you really blame the organization when the team is standing at 0-16, about to face one of the best teams in the league to tie for the worst start in NBA history? It just feels like he’s had so many variables go against him this year. That trade with Orlando, they are really going to miss Ryan Anderson as he continues to get better and better. The injuries, jeez, he’s even had to deal with H1N1 slowing his squad down.

Thinking of LF, who always made me smile to think of his beginnings as a basketball manager in college. I was a basketball manager in college. I didn’t work under Bobby Knight, so it was a little different, but one thing that remains the same: To do that job well you simply have to love the game. His love and devotion to his craft was always something that I respected about Frank. I know he’ll find another gig elsewhere, but it just sucks that this is how the season had to start out for him.

It also sucked watching that Lakers/Nets game last night. With LA doubling NJ’s score a few times and going on to win by 19, New Jersey now has to head home and figure out how to get a win against former Net Jason Kidd and the Mavericks. I hope they break through soon.

If the Hornets can stay afloat until Chris Paul returns, the maturation and “learning on the job” that Darren Collison has had to learn in his absence is going to help that team finally be able to get Paul more rest without the team falling off rapidly while he catches his breath.

The Timberwolves found a way to win last night, defeating the Nuggets in Denver, 106-100. Ryan Gomes had 27, while Jonny Flynn and Corey Brewer each added 16 points apiece to nullify the 32 that Carmelo scored for the Nuggets. Minny won despite giving up a 40-point first quarter to the Nuggets, holding them to just 12 points in a disastrous third quarter.

The Oklahoma City Thunder sure are exciting to watch, aren’t they?

When I got home I caught the very end of the Heat/Celtics game. The Celtics are so frustrating because even though they’ve appeared to struggle this season, they are still 13-4 and you know they’re just starting to get it together. Thoughts and prayers continue to go out to Ray Allen and his family, after their youngest son, Walker was hospitalized over the holiday weekend. Thankfully he is back home and doing well.

The Magic crushed my heart on Saturday, taking down the Bucks by two and last night they had just enough to drop the Knicks to 3-14 on the season.

Did you see the Youtube clip of Charlie V breaking his nose against Ben Wallace’s hip? If you haven’t, resist the urge. Almost got a headache just looking at that. Yuck. The Pistons got a huge victory over the Atlant Hawks, though. Tell me this: How the hell is Detroit 6-11 and Toronto 7-11? My goodness.