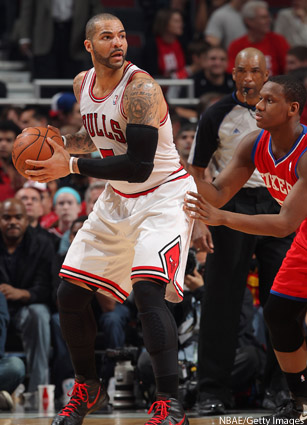 Two teams with two very different tales went in separate directions tonight. The Pacers advanced to the second round of the playoffs for the first time in seven years. They took care of business on their home court, and their fans showed the best spirit they’ve shown all season. On the other hand, the Magic were eliminated from the post season in the first round for the second straight year. Rumors have circles about head coach Stan Van Gundy’s contract since midway through the year and they will definitely come alive again within the next week.

The game, as most did in this first round matchup, had a strange feel. The Pacer starting five rushed out to a speedy start, grabbing a 15 point lead with 2:00 left in the first quarter. As has been the theme of the series, the Pacers squandered the lead and went into recess up 3. Their offense flowed masterfully in the first half and translated into the second as well. Behind the sharpshooting of George Hill, the Pacers jumped out to another double-digit lead and yet again blew it, trailing by 1 going into the fourth quarter. Daren Collison took over in the fourth and ignited a 36-point fourth quarter for the Pacers, the largest scoring sum of the playoffs in one quarter for the Pacers. Quite frankly, the Magic just ran out of gas.

“I squeezed it hard in the third to play a good third quarter, and I probably didn’t position us to play as well as we could’ve in the fourth,” Magic coach Stan Van Gundy noted. “I thought they gave a great effort tonight. We just got outplayed by a better team.”

Van Gundy didn’t shy away from the elephant in the room and addressed the questions about his future with the Magic. “I want to come back, but that’s not up to me. As far as the speculation, I’ll say the same thing I’ve been saying all year: who gives a damn. They’ll make a decision when they make a decision. I’m not going to worry about it.”

Danny Granger lead the game with 25 points, shooting 4-9 from beyond the arc. The Pacers as a team shot 52.5% from the field and shot an even better 52.9% from three. They had four double-digit scorers and cracked 100 for the second game in a row. On top of their outstanding offensive performance, the atmosphere in Indianapolis was at a season-best.

“I’m just so happy for our fans,” Pacers coach Frank Vogel explained in post game. “To finally see us come back, have a winning team again, and finally have a chance to do something special this year is what they deserve. Pacers basketball is back.” —Dave Spahn (@DaveSpahn)

The thing that was evident early on in this one was that if Atlanta was going to go down in Game 5, it was going to do so in style. And we’re not talking about the Hawks’ play either. We’re talking about Philips Arena. At the tip, the courtside seats were overflowing with big names: basketball legend Julius Erving, comedian Katt Williams and singer/producer The Dream (who was rocking the Marty McFly Nikes). Everybody wanted to see if/how the Hawks would slow the streaking Celtics.

In the first quarter, it appeared that Boston was going to send celebrity row home disgusted. As has been the case for most of this series, the Celtics looked poised going up and down the court. An early 11-3 run helped build a cushion they’d hold for the quarter. Kevin Garnett’s (16 points, 7 rebounds) buzzer beater was just a lil’ sumthin’ extra for the celebrities in attendance. 21-15 at the end of one.

We did well on Finals. Now it’s your turn. –Anonymous Fan’s Game 5 Poster

The young student’s sign got a thumbs up for not only being creative but for also bringing up a valid point about whether or not the Hawks had the mental fortitude to overcome another Celts’ lead. With Joe Johnson and Josh Smith struggling mightily (5 of 20 for the first half combined) in the back-and-forth affair, Marvin Williams, Kirk Hinrich (7 points in the half) and Al Horford picked up the offensive slack and kept Atlanta from falling too far back. 40-40 at the break.

The second half, save for one inexplicable Hawks string of six straight turnovers, was a lot smoother for the home team. Marvin (15 points) kept nailing open buckets. Josh (13 and 16) and Al (19 and 11) kept things tidy in the paint. Even Joe (15 points on 6 of 17 shooting) kept from being the butt of the next Katt Williams joke.

Still, even with a balanced Atlanta attack (all 5 starters in double digits), Boston would not go away. The score was 87-86 Hawks, but the Celtics had their chance with a few ticks left. Unfortunately for Rajon Rondo (13 points, 12 assists), he got trapped along the sideline and couldn’t get a final shot off. The Dream, Dr. J and every other A-town resident left with a smile.

Boston will get its next chance to wipe it off Thursday at TD Garden. —DeMarco Williams (@demarcowill)

The Bulls did what they were supposed to do against the Sixers in Game 5.

Facing elimination on their own home court, Chicago came out with a sense of urgency and for the first time since losing Derrick Rose in Game 1 of the series, the Bulls played a full 48 minutes and closed the Sixers out to force a Game 6 on Thursday.

Luol Deng (24 points, 8 rebounds) and Carlos Boozer (19 points, 13 rebounds, 6 assists) led the way for Chicago as the team’s only double-digit scorers, and Taj Gibson (8 points, 7 rebounds, 4 blocks) once again came up big off of the Bulls bench and gave them a spark when they needed it.

Whether it was scoring, rebounding, blocking shots or getting into a scuffle with Elton Brand (5 points, 7 rebounds) over a loose ball, Gibson proved once again why he’s been Chicago’s MVP in this series.

Of course it wouldn’t be a Bulls game if someone didn’t get hurt. This time, it was the aforementioned Gibson who suffered an ankle sprain late in the third quarter when going for a blocked shot on Philadelphia’s Lavoy Allen. Gibson would return later in the fourth quarter and said after the game, “I was going back in regardless of the pain. I was only worried about riding until the wheels came off.”

For the Sixers, that’s exactly what happened in Game 5. The wheels came off.

Philly had been rolling after being able to hold off the Bulls late and being able to secure three consecutive wins. They just weren’t able to do it four times in a row to advance to the next round. Head Coach Doug Collins credited the Bulls defense for that: “They are an excellent defensive team. They do a good job because they are a big, strong team…We are not a big physical team.”

Things did get rough in Game 5 and all you had to do was look at the left side of Sixers big man Spencer Hawes’ face, which had scratches from just above his eye down to his chin.

“That’s the way these games have been going. It’s a physical series,” said Hawes who had another solid outing with 11 points and 14 rebounds. “If that’s how it’s going to go, we can play that brand of basketball.”

Dunks on dunks on dunks. That’s what it felt like while watching JaVale McGee last night. The 7-footer put together a dazzling 24-point and 14-rebound performance in Game 5, leading to a 102-99 Nuggets win. McGee consistently beat Lakers’ post players down the floor and had TNT analyst Kenny Smith running some PR for him on Inside the NBA, describing McGee as simply “bigger, faster & stronger” than the Lakers big men. “You got to give McGee credit,” Lakers coach Mike Brown said postgame. “I thought he was the difference in the game.”

Denver held a 92-79 lead with about five minutes left in the game when Bryant started cooking from outside—stroking four 3-pointers over the next four minutes, including a ridiculous make over the extended arms of a hopeless Danilo Gallinari. The Lakers came within two in the final minute, but Kobe missed three shots that could have tied the game in the final 30 seconds. LA had the final possession of the game but could not convert two 3-point attempts—one by Kobe and the other by Ramon Sessions, as time expired. The Lakers’ big men didn’t dominate as they had in previous games. Andrew Bynum finished with 16 points and 11 rebounds on 8 shots. Pau Gasol finished with 9 points and the Lakers didn’t get much else from their supporting cast.

“If we stop the bigs we can let Kobe do what he do,” McGee said.

Bryant was disappointed with the Lakers performance in a close-out game. “I wouldn’t say our energy kicked in in the fourth quarter,” said Bryant. “I almost bailed us out, that’s what happened. It wasn’t the energy. I just started making shots left and right that got us back in the ball game. That’s not something we can use to rely on to get us to the championship. We all have to step up and we all have to contribute and we all have to play with that kind of energy and sense of urgency.”

Andre Miller was a huge spark for Denver off the bench with 24 points and 8 assists, while Kenneth Faried added 10 points and 9 rebounds, his energetic play on both ends frustrating Bynum into a technical at one point for shoving him after a play. And after struggling offensively through the first four games, Arron Afflalo bounced back with 19 points. Denver will fly home still down a game but will have some much needed confidence and momentum heading into game six on Thursday. —Nima Zarrabi (@NZbeFree)