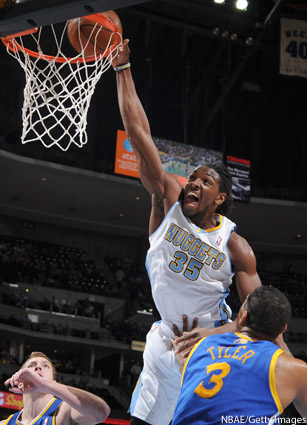 Ten games to get to, so no time for small talk. Let’s go!

I’m not sure whether to be embarrassed (for obvious reasons) or proud (for having the courage) to have actually watched portions of this epic battle of the NBA’s two worst records. But hey, at least my team came out on top, leading from start to finish behind 20 points from Jordan Crawford, the best of 7 Wiz who finished in double figures. Halfway through the fourth quarter, John Wall still had more assists than the entire Bobcats team—Charlotte finished with 16, Wall 12. Ping-pong balls, y’all.

Superman sat down on Monday night, donning a more Clark Kent-ish look on the end of the bench while resting a bad back, but even without Dwight Howard, Orlando had no problems dispatching of Detroit. Glen Davis started in Howard’s place at center (for real, he did) and dropped a 16-point, 16-board, 5-dime game on the Pistons. The Magic spread the floor and shot the ball lights out—they hit 15 threes and were 53 percent from the field for the game. Jason Richardson scored 22 (6 threes himself) to lead all scorers, and all five Orlando starters put up double figure scoring nights. And since I’m a noted Greg Monroe supporter, I’ll note for you here that he shot the ball only 6 times, scored 9 points and hauled in 5 rebounds in just 23 minutes of action.

George Hill started at point guard in place of an injured Darren Collison and sparked Indiana’s offense with 18 points, 7 rebounds, 4 assists and not a single turnover, as the Pacers beat Toronto at home despite a late scare from the Raptors. Indy led by 13 after former Raptor Leandro Barbosa drained a three near the end of the third quarter, but Toronto came back to within 2 midway through the fourth behind an 18-point night from Linas Kleiza (who shot just 3-10 from the field but 10-10 from the free throw line). Barbosa, though, drilled another 3-pointer to give the Pacers an 8-point advantage with just over 2 minutes to go, and that was all she wrote.  The Pacers completed the season sweep of the Raps—who played without Andrea Bargnani, whose calf has flared up again.

Spoiler alert: with the Spurs L last night, the Thunder are back on top in the Western Conference standings, after pummeling the Bucks behind 26 points and 7 boards courtesy of Russell Westbrook. Oklahoma City didn’t waste any time running out to a 35-18 lead over Milwaukee after one quarter, and the Thunder kept the pressure on with 20 fast break points on the night (to just 6 for the Bucks). Apparently, the home team didn’t like that—this game got chippy in a hurry, as 7 techs were called. Kevin Durant’s shot was off (5-14, 19 points) so he decided to play the role of facilitator, handing out 8 assists to help OKC stop a 3-game slide. Milwaukee, meanwhile, had its 4-game winning streak snapped, and the Bucks are now 9-25 against teams with a .500 or better record.

Make it 3 in a row for the Grizzlies, who avoided a season sweep at the hands of the Clippers behind a balanced scoring attack and a big night on the boards. Six Memphis players scored in double figures, led by Marc Gasol’s 18 points (plus 8 rebounds and 7 assists) and Rudy Gay’s 16 points—including the game-sealing dunk off a backdoor cut with under a minute to play. Even without Tony Allen in uniform due to his “facial lacerations” (an injury only Gucci could suffer, considering how badass it sounds), the Grizz played tough as nails, outrebounding Lob City 48 to 36 and coming up with big defensive stops down the stretch. The Clips got basically nothing out of their bench, starting with Nick Young’s zero points on 0-5 shooting. Chris Paul (21 points, 6 dimes) and Blake Griffin (19 points, 6 boards) kept LAC in it until the last minute, but the Grizz gritted it out to improve to 33-23, only a hair back of Lob City’s 34-23 mark.

With Kobe Bryant sidelined for a second straight game with a left shin injury, Pau Gasol knew he needed to step up. And step up he did, delivering 25 points and 9 rebounds to lead Los Angeles to a comeback win over the Hornets. Gasol drained a long jumper at the buzzer to give the Lakers a 1-point lead at halftime, then led a late defensive stand to help L.A. overcome a 9-point deficit in the fourth. Andrew Bynum, Steve Blake and Metta World Peace all hit big shots in the final 3 minutes of the game before Ramon Sessions delivered the back-breaker with under 30 seconds left on a high-arcing three-pointer to give the Lakers a 6-point lead—enough to get past the horrible Hornets, who were led in scoring by 20 apiece from Marco Belinelli and Carl Landry in Eric Gordon’s absence (back injury).

It’s hard to call 25 and 10 a “bad night,” but that’s exactly what it was for Kevin Love, who shot just 1-6 from 3-point range and 7-19 from the floor overall. Suns rookie Markieff Morris kept up with KLove all night, leading Phoenix with 21 points (9-15 shooting) and 6 rebounds. Morris led a mind-boggling 66-point effort from the Suns’ bench, which bested the Wolves’ reserves (27 points) and boosted PHX to another step towards the Playoffs. In truth, though, you only have to look so far as the shooting percentages in this game to see why the Suns so thoroughly dominated: Phoenix shot 57 percent from the field, while Minnesota went brick city at 39 percent. Steve Nash got to rest so much that Sebastian Telfair matched his 14 points on the night. Phoenix is now a season-best 3 games over .500 at 30-27.

In the normal course of my nightly NBA-watching, I try to at least peek at every game for a few minutes. But when I stumbled on Nuggets-Warriors near the end of the third quarter and saw the score was 90-55, I thought something was wrong with my television set—or someone had put something in my drink. But nope, the Nuggs really laid the smackdown on the Dubs last night, led by everyone’s favorite rookie, Kenneth Faried, who was not only his normal electrifying self in the dunk and swat departments, but actually put up career-highs in points (27) and rebounds (17). Oh yeah, and he did all that in just 24 minutes. Kid’s legit. The Warriors? Not so much. Golden State shot 37 percent, Klay Thompson had the “best night” of the team’s starters with 17 points on 5-13 shooting, and how about this stat: the Warriors managed just 18 points in the paint, to a whopping 70 for Denver.

What is it with Gregg Popovich and 11-game winning streaks? Pop decided yet again to sit his “Big Three” after rattling off 11 in a row. Tim Duncan, Tony Parker and Manu Ginobili had the night off—in fact, they didn’t even travel with the team to Utah. The Jazz starters were fine with that, taking advantage of the lack of star power by grabbing a much-needed win. Devin Harris finished with a game-high 25 points, 6 assists and 6 rebounds, including a pair of massive 3-pointers in the final 4 minutes of the game to put Utah in control, while Paul Millsap (18×10) and Al Jefferson (12×10) added double-doubles to help out. Harris had 11 in the fourth quarter, tearing up the Spurs’ reserve point guards and finding teammates left and right. The short-handed Spurs got 14 points apiece from Gary Neal and Tiago Splitter, but DeJuan Blair (13 points) was the only starter in double figures.

Houston completed a 4-0 road trip by holding the Blazers to 40 percent shooting and riding 22 points from Goran Dragic, who is averaging 21 and 8 assists over the last week. LaMarcus Aldridge (20 points) kept Portland close by hitting a 3-pointer with 9 seconds left to cut the Rockets’ lead to 92-87, but it was simply too little too late for PDX. Jamal Crawford stepped into the starting lineup for Nicolas Batum (knee tendinitis) and scored 18 points, but Houston’s 1-2 punch of Kyle Lowry (13 points) and Chas Budinger (15) provided enough punch off the bench to top the Blazers. And peep this stat from the AP recap: “The Rockets are 18-0 this season when they keep an opponent under 90 points.”

Dunks of the Night: Two rookies rock the rim—first Jan Vesely on the ‘Cats, then the Manimal over the Dubs.

Tonight: I’ll be in Newark for Sixers-Nets, part of a six-pack on Tuesday highlighted by Celtics-Heat and Bulls-Knicks, both on ESPN.