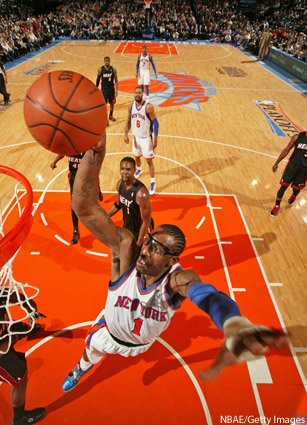 The Bulls dropped another close game on the road in Philadelphia to the Sixers and are now just one loss away from being eliminated in the first round and having the dubious distinction of being the fifth No. 1 seed to lose to a No. 8 seed.

Philly knocked off Chicago 89-82 to go up 3-1 in Game 4 of their first-round, best-of-seven series and the scene shifts to Chicago for Game 5 on Tuesday at the United Center in what could very well be the last time NBA basketball is played in the Windy City until October.

After losing Derrick Rose in Game 1, the Bulls were also without Joakim Noah, who suffered a severely sprained ankle in the third quarter of Game 3 and kept him on the sideline sporting a walking boot for Game 4. His season, like Rose’s, is most likely over, since it’s highly unlikely he’ll be ready to go on Tuesday with such a quick turnaround.

Carlos Boozer led Chicago in scoring with 23 points and 11 rebounds and Taj Gibson provided energy off the bench with 14 points and 12 rebounds. And CJ Watson made an appearance (finally) in Game 4 after going scoreless in Game 3. He put up 17 points but still struggled with his shot (5-18).

For the Sixers, Jrue Holiday has been a problem that the Bulls haven’t been able to solve since Game 2. Holiday struggled mightily in the game with his shooting going 7-23 from the field, but he hit back-to-back three-pointers late in the fourth quarter that pushed Philadelphia’s lead from 1 to 7—that proved to be the dagger in the ball game. He finished the game with 20 points, 8 rebounds and 6 assists.

And Spencer Hawes continued his strong play, as he registered 22 points and grabbed 8 rebounds, following up a 21-point, 9-rebound performance in Game 3.

Game 4 was a must-win for Chicago. A victory would’ve evened the series and given them life going back to their home court for Game 5, but a loss pretty much spells their doom. It’s no longer a matter of “if” the Sixers can beat the Bulls, but “when.” —Bryan Crawford (@_BryanCrawford)

First it was a stagnant Dwyane Wade-Chris Bosh pick-and-roll, then it was a botched Wade dribble-drive, then it was a contested Wade fade-away, and then it was over. Whatever the hell it was, the Miami Heat’s final play was a massive failure, and the Knicks, for the first time in a few hundred centuries—or 11 years, if you’re into specifics—outscored their postseason opponent and earned a playoff victory. Huzzah!

The game’s final few minutes were especially chaotic. Carmelo Anthony (41 points, 12 of which came in the fourth) hit shot after shot, breaking only to find Mike Bibby (!), who drained a three that gave the Knicks an 84-81 lead. But LeBron James (27 points) consistently kept the Heat close, tying things up with a trey and then putting his squad up with a 3-point play that he converted while barreling down the lane and finishing with a certain finesse-and-strength combo that at this point deserves the adjective “LeBronesque.” Another one of those aforementioned Melo jumpers gave the Knicks the lead, and then Miami’s final-play fiasco went down, and suddenly we’re headed back to Florida for Game 5 with the Heat leading the series 3-1.

“For me personally, I would have loved to have the ball, but as a team we win games together and lose games together,” LeBron said after the inevitable question about the last shot. “That’s all that matters.”

As much as the Knicks’ fanbase can and will rightfully celebrate the playoff win, it’ll also lament the loss of starting point guard Baron Davis, who went down in the third quarter with a dislocated right patella. Without Davis, the Knicks turned to Bibby, who was surprisingly solid, and JR Smith, who shot 3-15 and was, ya know, not so solid. Elsewhere, Amar’e Stoudemire returned, and was impressively effective, racking up 20 and 10.

Davis will almost definitely miss the remainder of the series, which’ll fuel talk of the return of a certain New York point guard who’s been sidelined for the past month following knee surgery. At this point, given the late-March injury that kept Jeremy Lin off the floor and out of the news for the past month, Linsanity feels like an isolated incident, a tornado that stormed through Manhattan and left rubble in the form of replica jerseys and bootleg t-shirts.

The Knicks and Heat face off next on Wednesday night, which is more than enough time for the hype machine to get Lin’s name back in the minds of optimistic Knicks fans hoping for one more miracle out of a 2011-12 session that’s featured one or two of ‘em. No team in NBA history has fought back from down 3-0 to advance to the subsequent round, but a little historical context won’t cloud the optimism of a fan base that doesn’t appear ready to waive goodbye to this dizzying rollercoaster of a season just yet.

Knicks coach Mike Woodson said Lin’s status remains uncertain, and that we’ll be receiving more information on the matter shortly, but the consensus is that by Wednesday, Lin should be good to go.

Which means: Like or not, some version of Linsanity is on its way back to town. Prepare accordingly. —Adam Figman (@afigman)

As much as side stories from Boston’s side (Ray Allen’s health) and Atlanta’s (Josh Smith’s return after missing Game 3; Al Horford’s first action since January) tried to captivate headlines on Sunday, this game boiled down to one match-up: Paul Pierce vs. Joe Johnson. Whichever all-star could play with the most urgency and execute would win the contest. Pierce, who’d averaged 23 points and 7 boards in the series, needed a good night to help the Celtics take a dominating 3-1 lead. Johnson, who’d had nights of 11, 22 and 29, had to be colossal for the Hawks to even the series at 2-2.

From the gate, it was clear that only Pierce got the above memo. It didn’t matter whose hand was in his face, Paul would nail the first-half shot. Floaters. Fadeaways. Fifteen-footers. The flightless Hawks had no answer. Things were going so well for Boston’s future Hall of Famer that TNT analyst Reggie Miller had to chime in: “He’s beautiful to watch. You’re watching greatness in [Number] 34 in white.” In fact, the only way Atlanta could slow Pierce down was with an inadvertent trip from Josh Smith towards the end of the first half. Didn’t matter. By that time, Boston was already nearing a 20-point lead. Pierce finished with 24 points in just 17 minutes.

As for Joe Johnson, we’re not sure what his issue was. Though he always wears a placid look about the face, Joe seemed especially uninspired in this one. Reggie tried to keep the talk around the Hawks guard optimistic with a “When he’s engaged, when he’s tuned in [he’s good]” line, but there was no helping this pathetic performance. 9 points, 3 assists and 1 rebound in a crucial Game 4? Seriously? And the fact that Johnson had fewer shot attempts (8) than the super-rusty Horford (10) shows an inexcusable lack of fire.

The Hawks All-Star and the rest of a bruised Hawks squad will have one last chance to stop Pierce, Rajon Rondo (20 points, 16 dimes) and company on Tuesday in Game 5. Oh, and Joe, just in case you decide to show up for that one, the game’s at 8 at Philips Arena in downtown Atlanta. —DeMarco Williams (@demarcowill)

Ramon Sessions and Steve Blake hit clutch 3-point baskets in the final minute to help the Lakers hold on for a 92-88 victory over the Nuggets in Game 4. With 48 seconds left in the game, Pau Gasol found Sessions in the corner for a wide open look, giving LA a three-point cushion. Following an offensive goaltending call against Andre Miller, the Lakers went for the dagger on the next offensive sequence with Kobe Bryant finding Blake in the opposite corner for a three, putting the game out of reach. Blake finished with 10 points in 29 minutes of game action off the bench. Bryant praised him after the game. “He’s done it for us in the past,” Bryant said. “These moments don’t scare him.”  Bryant improved on his game 3 struggles, adding 22 points, 8 rebounds and 6 assists in Game 4. Andrew Bynum posted 19 points and Jordan Hill made a nice contribution off the bench with 12 points and 11 rebounds.

The Lakers grabbed 19 offensive rebounds and did a great job containing Denver big men JaVale McGee and Kenneth Faried, holding them to a combined 14 points and 11 rebounds. “Losing always gets old. Losing is not fun. I’m not unhappy with my team, I’m not happy with where we’re at, but we still have a series to play,” Denver coach George Karl said. Danilo Gallinari led Denver with 20 points and Miller added 15. Game 5 is Tuesday night in L.A. —Nima Zarrabi (@NZbeFree)

Fan of the Night: This lady is a kook. Then again, she was wide open for three—c’mon Ty, pass the rock!