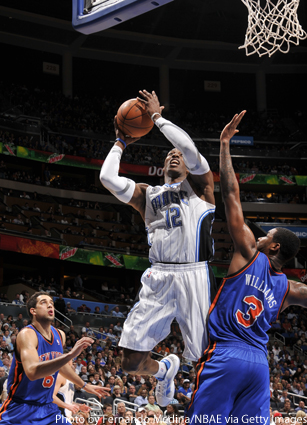 There were two factors at play here: One, the Knicks shot 37.2 percent from the field, while the Magic shot 52.2 percent. That’s a big difference, big enough to attribute a loss or win to. Two: Jameer Nelson going absolutely wild in the second half, scoring 23 of his 26 in the final two quarters and hitting a number of big buckets down the stretch. Combine Nelson’s play with Dwight Howard’s (30 points, 16 boards) control of the paint, and you’re probably not going to lose that contest. Amar’e Stoudemire and Chauncey Billups both put in 30 for the Knicks, who will return home to face the Hornets tonight.

The Pacers are gonna need to step up and pull some wins if they want to grab the eight spot in the East, meaning they can’t squander good opportunities to get said Ws. Last night they didn’t, hanging on to defeat Golden State behind a strong effort from Danny Granger (27 points). Six Pacers scored in double figures, though defeating an opponent while shooting 3-16 from three is pretty tough, so kudos to Indiana. The sharp-shooting Reggie Williams led all Warriors with 25.

Sans Tony Parker, the Spurs had no fire, and the Grizzlies came out hot and ran all over ’em. No Spurs starter played more than 28 minutes, and Gary Neal led all of his teammates with 14. But, come on, haven’t these vets earned some time off? This feels like the perfect time for the Spurs to regroup, get some rest, and focus up for the Playoff push. Zach Randolph and Darrell Arthur each scored 21 for the Grizz.

Hey look, it’s Rip Hamilton! Seemingly out of the doghouse, Rip emerged to score 10 points in 27 minutes, though the Pistons fell late to the Bucks after some clutch Brandon Jennings (21 points) freebies clinched it. Rodney Stuckey dropped a game-high 25.

The Mavs won their seventh straight, receiving 30 points from Jason Terry and a triple-double from Jason Kidd (13-10-13) along the way. Unfortunately, Tyson Chandler went down in the second quarter with a sprained right ankle, so that’ll need to be taken care of (read: not, um, sprained) if the Mavs are going to take on the likes of the Thunder and the Lakers. Terry was dominant, hitting jumpers from all over the court and finishing a fast break late in the fourth quarter that closed off the Sixers. The L was Philly’s first in five contests.

For the second straight game, Chris Paul struggled, scoring just 7 points off 3-10 shooting from the field. And the Raps took full advantage, defeating the Bees behind Jose Calderon (22 points) and DeMar DeRozan (17). It’s almost strange, seeing things click for the Raptors and wondering if they can (and one day will) be much better. Who knows? But they did look it last night, shooting 49.4 percent from the floor and 93.3 percent from the line in the victory.

If the Lakers can’t, I’m pretty sure nobody is holding back Kevin Love (13 points, 11 boards) from getting a double-double each and every game. Holding Love’s squad back from winning is slightly easier, as the Lake Show did last night. Kobe Bryant led L.A. with 24, while Pau Gasol went for 12 points and 17 boards. The Lake Show has now defeated Minny 14 straight times, and no, I don’t have a punchline for that—I just feel kind of bad. Let’s move along.

The Rockets pulled back to .500, winning their fifth straight over the new-look (well, with Gerald Wallace) Blazers. Kyle Lowry and Luis Scola both played about 40 minutes, scoring 21, while Kevin Martin put in 20. Could the Rockets have something going here? Definitely looks like it, as they’re now a reasonably three games out of Playoff contention.