Post Up: Pacers, Wizards And Bucks Hold Serve At Home 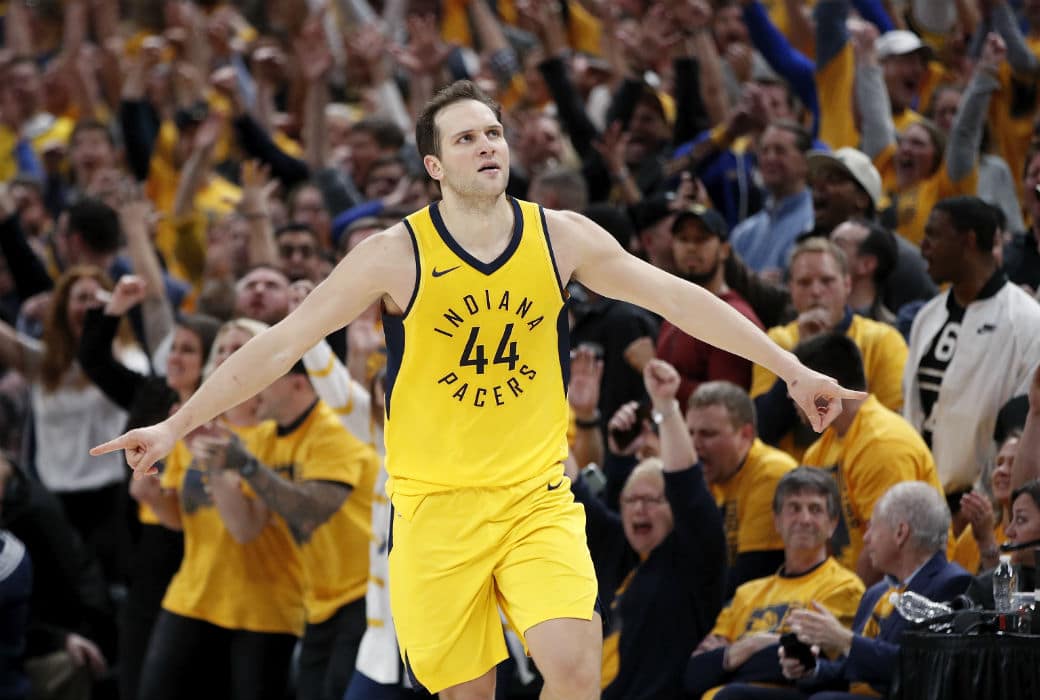 These Pacers just don’t stop fighting. Despite Cleveland holding a 17-point halftime lead, Indiana came all the way back in the second half, holding the Cavs to 33 points in the game’s final two quarters to grab a crucial series lead.

On a relative off-night for Victor Oladipo (18 points on 5-of-15 shooting) and Myles Turner (8 points and 10 rebounds), it was Bojan Bogdanovic (30 points) who led the way. He knocked down seven triples and, at one point in the fourth quarter, scored 12 straight points for Indiana. LeBron (28 points, 12 rebounds, 8 assists) answered Bogey’s personal 7-0 run with one of his own, but couldn’t get any help from his supporting cast down the stretch other than a Kevin Love (19 points, 6 rebounds) three.

In the final nine minutes of the game, only Love and LeBron scored for Cleveland. With that said, the Cavs had a chance to win at the buzzer after Darren Collison split a pair of free throws. However, J.R. Smith’s halfcourt heave was a little bit short, securing the W for the home team.

Safe to say this was a bad loss for the Cavs who, yet again, looked like a completely different after halftime than they did before it. Now, Indy firmly has homecourt advantage heading into Game 4, in which Cleveland will need a lot more help from the bench/shooters in if it’s going to be a winnable one.

No sweep incoming for No. 1 seed Toronto. The Washington backcourt of John Wall and Bradley Beal (28 points apiece) dominated on both ends of the floor, scoring at will and helping force a bunch of turnovers (they combined for 7 steals as Toronto committed 18 miscues). Mike Scott and Kelly Oubre (12 points apiece) played well off the bench.

While it wasn’t particularly close score-wise after Washington’s big second quarter, this was a pretty physical game with some fiery scuffles. Markieff Morris and O.G. Anunoby got into it just 2.5 minutes after tip, with both earning techs. Then, later on, Wall, Beal and Serge Ibaka got T’d up after Jonas Valanciunas wouldn’t give up the ball following an offensive foul.

DeMar DeRozan (23 points) and Kyle Lowry (19 points, 8 assists) paced Toronto offensively but, without the injured Fred VanVleet, the Raptors’ bench struggled again. If VanVleet’s shoulder keeps limiting him, Toronto will have some issues to contend with.

Somehow, after weak showings in Boston, the Bucks are right back in this series. Milwaukee got out to a hot start and never looked back, holding the Celtics to 12 points in the first quarter and building a 23-point lead by the break. It was never really close at any point.

Khris Middleton (23 points, 8 rebounds, 7 assists), Giannis Antetokounmpo (19 points) and Eric Bledsoe (17 points) got the Milwaukee offense going early on and the Bucks stayed in rhythm all night. It helps when Thon Maker (14 points, 5 blocks) and Giannis are making unicorn-like plays on both offense and defense.

5️⃣first half blocks for Thon Maker. Milwaukee is absolutely rolling (via @Bucks) pic.twitter.com/CbCZmHfebO

Giannis is a bad, bad man (via @NBA) pic.twitter.com/Kgw1gbYbnF

With Jayson Tatum and Jaylen Brown held in check — and Terry Rozier essentially a non-factor — Boston just had a hard time scoring. The Celtics still control this series but there’s the risk that getting such a dominant W could kickstart Milwaukee a little bit going forward.