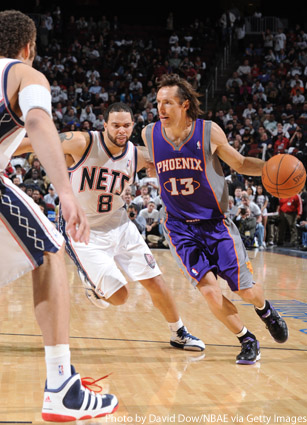 One day, maybe not too far away, John Wall (9 points, 10 assists) may evolve into something similar to what Derrick Rose (21 points, 9 assists) is right now. But that day is not here yet, and in the meantime, DRose and his Bulls are going to continue running all over J-Dub’s Wiz. This one wasn’t even close, as the Bulls dominated both the scoring and the boards (Chicago’s Bash Brothers-like front court of Carlos Boozer and Joakim Noah combined for 31 points and 21 rebounds) en route to the victory. The Bulls are now just a single game behind Miami, and only two behind Boston for the East’s top spot.

In Deron Williams‘ home debut, with Jay-Z, Beyonce and Michael Strahan watching courtside, DWill put on a solid show—13 points, 18 dimes—but a Channing Frye game-winning J with under 10 seconds on the clock spoiled the party. Minutes earlier, Anthony Morrow hit three free throws to force extra time, and after Frye’s second huge bucket this week, DWill missed a runner for the win, and a Kris Humphries tip-in was converted just a few milliseconds too late. Brook Lopez scored a game-high 28 (plus 10 boards), while Morrow put in an impressive 22 points during the L. But, seriously, who knew Channing Frye was so clutch? Dude won the game for the Suns in Indiana, and then won this one for the Suns in New Jersey. Which, I believe, qualifies as bi-winning. Word to Mr. Sheen.

Gonna go out on a limb and say that Carmelo guy isn’t being missed too badly in Denver. The Nuggets picked up their third win in four games post-Melo, riding a strong fourth quarter to the W behind JR Smith’s 19 points and double-digit scoring from five different (K)Nuggets. Joe Johnson led the Hawks with 22.

The Jeff Green (5 points) era got off to a rocky start, but some hot shooting from Ray Allen (25 points) saved the C’s, as they held on for their 43rd win. This one was ugly (the Jazz are now playing without Deron Williams, you know), and Boston’s post-Perkins interior D was nothing to brag about (see Al Jefferson’s 28 points and 19 boards), but it’s still a little early to start with the rash opinions of the Green-for-Perkins swap. The Celts will return home now, with the Suns on deck for tomorrow night. Pro tip: If things are close with the clock approaching double zeros, guard Channing Frye. Tight.

Some folks in Sacto were a little emotional in last night—”Here we stay” chants rang off at various points during the game, on the heel of the news the Kings may or may not be relocating—and, fortunately, the Kings’ players followed suit, coming through and defeating the Clippers by a small margin. Down five going into the fourth, Marcus Thornton (who scored a season-high 29, with 16 in the final quarter), put the Kings on his back and pushed them through the Blake Griffin-led Clips. Professor Griff scored 27, while Randy Foye dropped 23 in the loss.

Last Call: Channing Frye, for the win. Well, not right away, but eventually. And yeah, that’s two nights in a row Frye has occupied this space. Your move, every other NBA player.