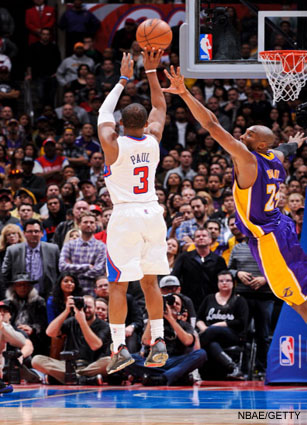 There were a bunch of close contests last night. The game of the night, though, occurred at the Staples Center, where Los Angeles’ two teams faced off. The Clippers are one tough squad.

Brooklyn trailed by 10 after the first quarter, but led by two with three seconds left after a Brook Lopez bucket. However, Nene answered with a deuce of his own for Washington, sending the game into overtime.

In OT, Deron Williams put the Nets ahead by three with three seconds remaining after a pair of free throws. This time, Bradley Beal stepped up for Washington, draining a game-tying three to push the game into a sixth period.

The game was tied with nine seconds on the clock in double overtime after Beal knocked down a pair of free throws. But Joe Johnson ended the game on a tough 18-footer, which couldn’t be answered by a last-second Jordan Crawford shot.

Johnson, who dropped 33 on Wednesday, scored 18 on 14 shots last night. Williams played well and finished with 24 points, 10 assists and 7 boards. He has 23 assists over his last two games. Brook Lopez was strong again, scoring 27 points with 13 rebounds and 3 blocks. The Wizards paid Andray Blatche to go for 13 points, 12 boards and 4 steals against them. Washington waived Blatche via the Amnesty Clause this summer.

Beal led the Wizards with 24 points. He made 10-of-19 shots and added 6 rebounds and 4 assists. Nene and Crawford were great, combing for 43 points on 17-of-25 shooting. Garrett Temple handed out 11 assists.

Kings (13-20) 105, Raptors (12-21) 96
Through the Kings’ first two January games, DeMarcus Cousins had totaled 39 points and 30 rebounds against the Cavs and Pistons. Sacramento faced another weak team in Toronto last night, and Cousins stayed red-hot. He went off for 31 points (11/18) and 20 rebounds. After a rocky first two months, Cousins is on the path to utter dominance. We’ll see if he can keep his head on straight for the rest of the season.

John Salmons added 20 in a game where Sacramento led by 19 entering the fourth quarter. Thomas Robinson continued his disappointing rookie season with 5 points and 4 rebounds in 23 minutes. He was a -6 while on the floor.

Kyle Lowry led Toronto with 24 points. He made 10/12 shots from the free throw line. Alan Anderson, who has turned into a great find for Toronto, went for 20 points. The 30-year old has consistently scored double-digits for the Raptors after going undrafted and bouncing around the League for years.

Ed Davis double-doubled with 11 points and 13 boards, and also blocked 3 shots. He played solid ball in December, and has continued that into the new year so far.

Cavaliers (8-26) 106, Bobcats (8-24) 104
Cleveland led by 12 at the start of the fourth quarter, but, as bad teams do, they blew the lead. An 86-74 lead turned into a 102-102 tie with under a minute remaining. Tristan Thompson canned a pair of free throws to put Cleveland up late, but Gerald Henderson responded with a jumper to knot the game again.

But with the shot clock turned off, Kyrie Irving drilled a 12-footer with next to no time remaining. Despite the heroics, Charlotte still has a better record than Cleveland even though they’ve dropped 19 of their last 20.

The Bobcats got a combined 47 off the bench from Ben Gordon and Ramon Sessions (12/12 FT). Henderson dropped 17.

Pistons (13-22) 85, Hawks (20-11) 84
Another nail-biter that could have been avoided. Detroit led by 15 at halftime before letting the lead slip. They scored just two points in the game’s final seven minutes. In the meantime, the Hawks turned an 83-66 deficit into an 83-82 contest with over three minutes to go.

If you do the quick math, though, you’ll see that the Hawks offense stalled after their 16-0 run, scoring just two points before the game’s end. They had a chance to win it late (down one with the ball after a stolen inbounds pass), but couldn’t convert.

Austin Daye came off the bench to lead Detroit in scoring. He made 9-of-11 shots for 20 points. Greg Monroe was only 5-for-14 from the floor, but finished with 18 points and 9 rebounds. Jason Maxiell double-doubled. The Pistons won the rebounding battle by 18.

Bulls (18-13) 96, Heat (22-9) 89
On bad nights, the Heat’s inability to win on the glass shines through. That was the case against Chicago last night, as the Bulls out-rebounded Miami 48-28. Miami grabbed only five more boards off Chicago misses than the Bulls did, as the Bulls totaled 19 offensive rebounds compared to Miami’s 24 defensive.

Joakim Noah and Carlos Boozer were the rebounding leaders, snatching 12 apiece. Joakim also made 12-of-17 shots on his way to 27 points. Taj Gibson added 9 rebounds in just 17 minutes off the bench. It’s his third straight game with at least 9 boards.

LeBron James led Miami with 30 points. He made 8-of-14 shots from the floor and added 6 boards, but had a lame 2:2 assist:turnover ratio. Dwyane Wade dropped 22.

Indy shot a horrid 31.8 percent from the floor, including 4-of-17 threes. They also made a pathetic 17 out of 28 free throws. Tyler Hansbrough was just about the only productive player on the team, making 7-of-11 shots for 19 points in 23 minutes. David West and Paul George each shot 4-of-18, while Roy Hibbert and DJ Augustin combined for 13 points. Ugly.

Trail Blazers (17-15) 86, Grizzlies (20-10) 84
Portland led 86-84 after LaMarcus Aldridge split a pair of free throws with 1.7 seconds remaining. Rudy Gay got a decent look at a jumper for Memphis as time expired, but couldn’t connect.

Marreese Speights started for Memphis and led the team with 22 points and 13 rebounds. Gay made 8-of-21 shots for 19 points and added 9 rebounds. He’s played games like that all season, and it’s led to a poor 41 percent shooting clip. He’s a reliable guy for Memphis, but he’s also a volume shooter and rarely scores efficiently.

Thunder (25-7) 109, 76ers (15-19) 85
After a tightly-contested first half (OKC led by just four at the break), the Thunder dominated the final 24 minutes. They took a 12-point lead into the fourth quarter and expanded on it, turning the game into a laugher late.

Kevin Durant was “only” 8-for-15 from the field, but added 9 free throws and a three to finish with 26 points. Russell Westbrook made 10-of-17 shots, including 4-of-4 from downtown, and finished with 27 points. He did commit 6 turnovers compared to 5 assists. Serge Ibaka double-doubled and added 3 steals, while Kevin Martin scored 16 off the bench.

Philly got 21 from Nick Young, who played 28 minutes off the bench. He knocked down 5 threes. Jrue Holiday finished with 15 points and 9 assists.

The Bucks had seven players score in double-figures, though Brandon Jennings’ 16 was enough to lead the team. He made just 6-of-15 shots. Monta Ellis made 5-of-19 shots, and was a -29 while on the floor. Each guard committed 4 turnovers. John Henson, who went for 20 and 9 against the Spurs on Wednesday, posted 11 points and 15 rebounds on Friday. Larry Sanders blocked 4 shots in just 18 minutes.

Jazz (17-17) 87, Suns (12-22) 80
Winning with 87 points against a bad team pretty much guarantees a tough game to watch. Utah made just one three-pointer last night, but Phoenix made only 4 of their 15 attempts from deep and turned the ball over 20 times.

Al Jefferson led the game with 21 points. Paul Millsap added 19 points, 10 rebounds and 5 steals for Utah. Gordon Hayward came off the bench for 14 points on 15 shots.

Marcin Gortat was Phoenix’s best player. The Polish Hammer went for 18 points, 11 boards and 3 blocks. Goran Dragic added 17 points and 6 assists. Michael Beasley failed to score in 8 minutes off the bench. He’s shooting roughly 37 percent from the floor this season and has turned into nothing but a bench warmer.

The Lakers trailed by 10 points at halftime and 16 after three quarters, but fought back in the fourth behind Kobe. He drilled a long jumper to cut the deficit to two with 1:29 remaining, leading to a Clippers timeout.

Red LA led by four with 43 seconds left, when a Kobe three-point attempt rimmed out. CP3 made a beautiful shot on the other end, and later closed the game by going 4-for-4 at the stripe.

Bryant finished with 38 on 25 shots, but it wasn’t enough. Pau Gasol and Metta World Peace were each 1-of-6 from the field. Dwight Howard went for 21 and 15, but made just 5-of-11 free throws. That hurts in a five-point loss.

Jodie Meeks, who has blindly been given a green light by coach Mike D’Antoni, made 3-of-13 shots off the bench. He’s a pretty good shooter, but he doesn’t deserve the amount of shots he gets for Yellow LA. He simply cannot take more than twice as many shots as Gasol in a tight game.

As for the LA rivalry, no matter what the Clippers do in the regular season, I believe they can only truly overtake the Lakers when they beat them in the Playoffs. Or, at least, make a deeper postseason push than the Lake Show.