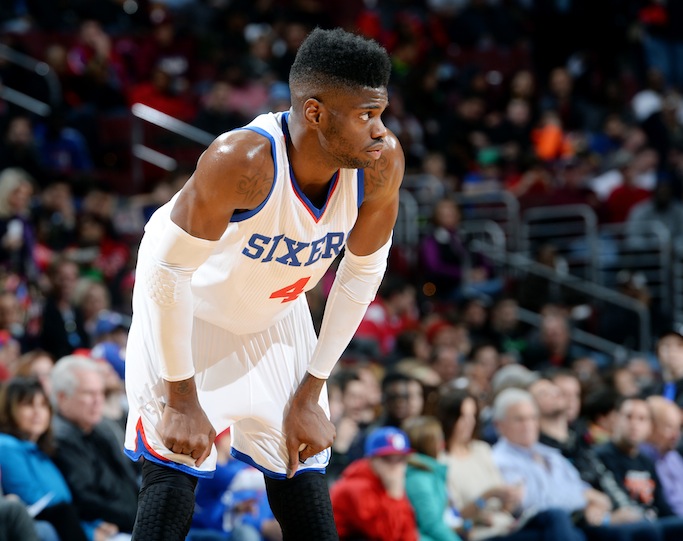 Tyson Chandler (20 points, 13 rebounds, 4 steals) has been on an absolute tear during the Mavs’ current three-game winning streak. During this span, the Mavs big man is averaging 16.0 points, 16.0 rebounds and 2.0 blocks while shooting 67.9 percent from the field. So far, he has looked even more dominant than his first time with the franchise. Meanwhile, in the backcourt, Monta Ellis (18 points, 5 assists, 3 steals) continues to come through with clutch baskets late in games. Without Dirk Nowitzki, who sat this one out for rest, Ellis became the source of most of the team’s offense and excelled in that role. Reserve power forwards Charlie Villanueva (11 points, 8 minutes) and Richard Jefferson (10 points, 3 assists) took advantage of Dirk’s absence and each reached double-digits. Michael Carter-Williams (18 points, 16 assists, 10 rebounds) managed to notch his first triple-double of the season as six Sixers scored in double figures. K.J. McDaniels (21 points, 13 rebounds) earned a double-double off the bench. However, as a team, they couldn’t make enough stops down the stretch as their offense stalled in the final quarter. This has been a common theme for Philly this season–keep the game in reach until the final 12 minutes when it all falls apart. The Sixers have now lost a franchise-worse 16 games to start the year and are two losses away from tying the all-time NBA worst start to a season when the Nets began their 2009-10 campaign 0-18.

Anthony Davis (30 points, 13 rebounds, 11-18 from the field) had yet another monster performance in attaining his fourth 30 point-10 rebound performance of the season. Even though his numbers obviously reflect that of a legitimate MVP candidate, the record does not. Davis will have a hard time making his case as long as Marc Gasol, Stephen Curry, Kyle Lowry and James Harden continue their level of play while their respective teams keep climbing the Western Conference ladder. Davis did his best to slow down Marcin Gortat (season-high 24 points, 13 rebounds, 4 blocks), but the Wizards big man had an extremely efficient third quarter, making five of the seven shots he attempted. And when the game was coming down to the wire, Washington had the veteran swingman ready to step up. After Davis dunked one home to give his team a 77-76 lead with 3:48 remaining, Paul Pierce (10 points, 3 blocks) softly made a finger role followed by a long-range bomb to give the Wizards an 81-77 lead. Bradley Beal (12 points, 2 steals) would tip one in to give his team their 10th win of the season and send the Pelicans below .500.

Charlotte seemed bound for a breakout season after making it to the playoffs last year, changing back to the Hornets logo this offseason and bringing in Lance Stephenson (6 points, 3 assists) to fill out the backcourt. Many believed Michael Jordan had started to send this franchise in the right direction. However, it has been nothing but a struggle so far as Saturday night’s game was just one of the many bumps Charlotte has faced this season. Behind a balanced attack, the Hawks jumped out to an early lead, and by halftime, held a 36-point lead—the largest halftime lead the franchise has had in 25 years. No Bobcats player looked comfortable in this game as they shot 29-88 (33.0 percent) from the field. To be blunt, their offense stinks. The Hawks, on the other hand, shot 53.3 percent from the field with Paul Millsap (18 points, 6 rebounds, 3 steals, 7-10 from the field) and reserve Mike Scott (14 points, 5-7 from the field) leading the way. Jeff Teague (6 points, 10 assists) didn’t reach double figures, but controlled the offense during his 20 minutes on the court. The Bobcats have now lost nine games in a row and are spiraling towards the bottom of the Eastern Conference. It is still early, but they are digging themselves into quite a hole if they want to make it back into the playoffs.

The Cavs have climbed their way back above .500 and are now riding a three-game winning streak after previously losing four in a row. They took down the Pacers thanks to Kevin Love (28 points, 10 rebounds, 9-13 from the field) coming alive and looking like the player Cleveland was expecting when they signed him this summer. He took quality shots, knocked down a couple treys and pulled down double-digits boards. With Anderson Varejao (rib contusion) sidelined, Kyrie Irving (24 points, 10 rebounds, 5 assists, 3 blocks) and Tristin Thompson (13 points, 11 rebounds) each notched double-doubles while LeBron James (19 points, 7 assists) acted as the facilitator for most of the night. With Roy Hibbert (ankle) still sidelined, Ian Mahinmi (7 points, 10 rebounds) got the start again and grabbed 10 rebounds. Mahinmi, along with David West (14 points, 6 rebounds), struggled to contain the stretch-four Love throughout the night. Lavoy Allen (10 points, 8 rebounds, 5-8 from the field) was active during his 17 minutes of playing time. This game remaining relatively close until the third quarter when James, Love and Thompson took over for Cleveland. After only leading 52-49 at halftime, the Cavs quickly went on a 15-5 run to make it 67-54 in less than four minutes and went on to build that lead to 85-66 towards the end of the quarter. Indiana only managed to shoot 39.2 percent from the field while Cleveland shot 52.6 percent.

The Clippers have now won four in a row and six of their last seven thanks to a wire-to-wire blowout of the struggling Jazz, who have lost five consecutive games. Los Angeles went 6-1 during this seven-game road trip, showing poise and maturity away from home. Just like Friday’s 102-85 win against the Rockets, Blake Griffin (28 points, 6 rebounds, 3 assists) and Jamal Crawford (22 points, 4-9 on 3-pointers) led the way with similar stat lines and each reaching the 20-point plateau for a second consecutive night. These two have found their rhythm with Chris Paul (17 points, 10 assists, 2 steals) commanding Doc River’s system and DeAndre Jordan (8 points, 12 rebounds, 3 blocks) pulling down the boards. The Jazz may be losing, but Gordon Hayward (30 points, 5 rebounds, 11-18 from the field) has been putting up fantastic numbers night in and night out. Now he just needs Trey Burke (3 points, 3 assists, 1-6 from the field) to somehow find his efficiency and the entire team to find their defensive toughness. The Jazz allowed the Clippers to run all over them on their way to shooting 56.2 percent from the field.

The Rockets outscored the Bucks in all four quarters in their 14-point win, ending the Bucks’ East-best three-game winning streak. James Harden (34 points, 8 assists, 6 rebounds, 4 steals) had another dominant performance, taking over in a decisive third quarter when Houston outscored Milwaukee 32-26. During this quarter, Harden torched the Bucks during a seven-minute span in which he scored 17—half—of his 34 points. Harden had plenty of help from his teammates on the night as Donatas Motiejunas (20 points, 6 rebounds, 4 assists) reached the 20-point plateau for the second time this season. Both of those performances have come in the past three games. Jason Terry (18 points, 6 rebounds, 5 assists, 4-8 on 3-pointers) easily had his best game as a Rocket while Trevor Ariza (14 points, 10 rebounds) earned a double-double in 40 minutes of play time. Someone on the Rockets always had a response every time the Bucks started to cut into the deficit. Milwaukee had plenty of their own offense, as the team persistently got into the lane and drew fouls. While the Rockets hoisted 38 3-pointers, the Bucks put up 35 free throws, making 31 of them. Jabari Parker (19 points, 9 rebounds, 5 assists, 2 steals, 13-14 on free throws) was the main contributor at the line and shot very efficiently. Ersan Ilyasova (18 points) and Giannis Antetokounmpo (17 points, 7 rebounds, 2 blocks) both put up quality shots and made all their free throws. There was a late scuffle between Harden, Antetokounmpo and Larry Sanders (11 points, 5 rebounds, 3 blocks), and they all received technical fouls on the play. The Rockets have a tough test coming up as they will face the 14-2 Memphis Grizzlies Wednesday night.