The Spurs and Cavs complete sweeps, the C's tie things up and the Dubs go up 3-1 but Curry goes down. 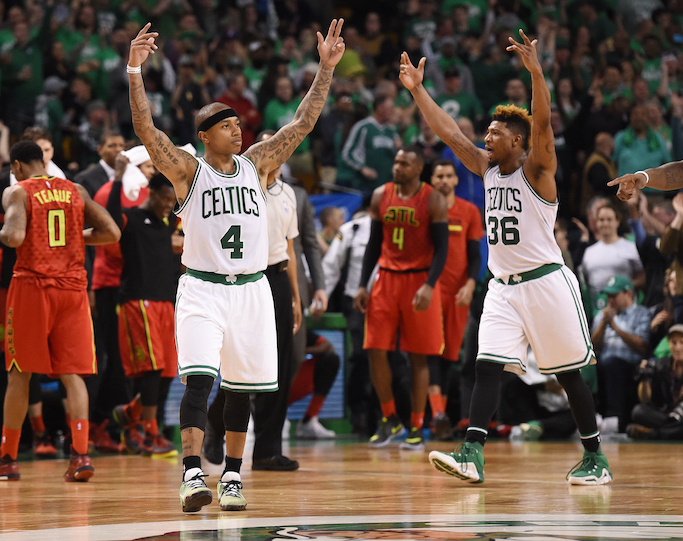 The Spurs swept a best-of-7 series for the ninth time under Gregg Popovich—most of any NBA coach ever. And though Memphis head coach Dave Joerger was proud of his guys, they were just completely overmatched against San Antonio all series long. Even Pop admitted, “It wasn’t a fair fight.” Kawhi Leonard scored a team-high 21 points in Game 4, while Lance Stephenson poured in 26 in a losing effort.

And while injuries are never good no matter how you spin it, Rockets fans may have been even more optimistic about stealing a victory in Game 4 when Steph Curry went down awkwardly to end the first half. But nah, the Dubs came out in the third quarter—without Steph—and dropped 41 points in the stanza to open up a double-digit lead and cruise in to a 3-1 lead from there.

Klay Thompson (23 points, 7 threes) and Draymond Green (18 points) were on fire in the third quarter, and as a team the Warriors set an NBA playoff record with 21 three-pointers made. Still, we’re all waiting on pins and needles to hear what Steph’s diagnosis is going forward, since he didn’t return to the game and has an MRI scheduled for Monday to look at his knee.

Curry: "I slipped, I fell, I hurt. My team is awesome. The end." #Warriors

Which has Golden State fans needed a little therapy until those MRI results come back. May we suggest this:

Paul Millsap was an unstoppable wrecking force for most of this game, finishing with 45 points, 13 rebounds and 4 blocks. But this game was decided by the guards. Marcus Smart (20/8/5) balled out, but Jeff Teague hit back-to-back threes to give the Hawks the lead with under a minute, before Isaiah Thomas answered back with a driving layup to tie the game at 92-92. On the Hawks’ final possession in regulation, the Hawks ran this garbage:

Not a great last possession for the #Hawks and Jeff Teague. #Celtics #NBAPlayoffs #NBA pic.twitter.com/GNlbK9N33y

Thomas delivered the dagger with this corner three late in OT, and now we’ve got a real series on our hands:

The Cavs took care of business in the first round and now get a week of rest after sweeping the Pistons in what was four pretty entertaining, pretty competitive games. Kyrie Irving dropped a game-high 31, including 3 in ridiculous fashion to end the third quarter:

LeBron had 22 points, 11 rebounds and 6 assists, Kyrie continued to be an offensive force in crunch time, and Reggie Jackson (13 points, 12 assists) came up short on the game’s final possession—trying to draw a foul rather than take advantage of a wide-open lane: