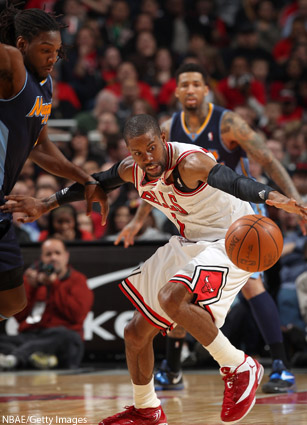 Much ado on the hardwood last night, as we race towards the end to one of the zanier season in recent memory. As the Playoff jockeying begins, things are especially bunched up out West. But we’ll start with the East, where the top two teams both suffered Ls on Monday night.

The NBA’s leader in 3-pointers made proved once again why he’s No. 1 in that category, as Ryan Anderson made it rain 8 times from beyond the arc, finishing with a game-high 28 points as the Magic blew out the Raptors in Toronto. Dwight Howard added 23 points and 10 rebounds for Orlando, which won its 3rd straight game after shooting 54 percent from the field and leading the entire way. As for the Raps, Andrea Bargnani hasn’t exactly been lighting it up of late, last night scoring just 8 points on 3-11 shooting. DeMar Derozan missed his second straight game nursing a sore left ankle and Jerryd Bayless (back after his own 2-game hiatus) left in the second quarter with an apparent hip injury. Tough times for Toronto.

After the Wizards let a 13-point lead become a 1-point deficit with a minute to play, Nene scored on a post iso to put the Wiz up 75-74 with 40 ticks to go, then again with under 10 seconds to tie the game at 77. Alas, the Wizards are 0-19 this season when scoring less than 90 points, so you knew how this one would end—even against the a fellow Lottery-bound team out of the East. The Pistons inbounded to Rodney Stuckey (24 points, 12 in the fourth) with 5 seconds left on the clock in regulation, and he promptly dribbled to the Wizards’ foul line, stepped back and drilled the game-winning jumpshot over Jordan Crawford (team-high 20 points) with 0.2 seconds on the scoreboard, sinking Washington and helping Detroit end a 5-game losing streak. Behold, below:

Paul Pierce put on a 36-point, 10-rebound show against Charlotte as the Celtics moved into a tie for first place in the Atlantic Division, equaling Philadelphia’s 27-22 record on the year. As of today, winning the Atlantic would mean the difference between the No. 4 seed and the No. 7 seed in the East—kinda like a big deal. Good thing Pierce was, as Doc Rivers noted, in “attack mode” from the go, scoring 17 in the first half and repeatedly getting to the free throw line (15-18 from the charity stripe). Boston led by as many as 18 points, and won easily despite the Bobcats’ bench outscoring the Cs by a 59-9 margin. Kevin Garnett pitched in 24 points and Rajon Rondo handed out 13 assists on what was a rough shooting night (1-7, 7 points). Gerald Henderson led the woeful ‘Cats with 21, while DJ Augustin was 0-5 from the floor with 3 turnovers and 2 points.

If ever there was a way to scream, “We’re legit!” the Pacers may have found it. Indiana held the Heat to just 4 fast break points and outmuscled Miami all night long. The loss is the second in a row for the Heat, and it marks the first back-to-back double-digit losses for the Big Three since teaming up in Miami. The Pacers held a 3-point lead at the break thanks to a Paul George buzzer-beater from beyond half-court at the halftime buzzer, and from there, held off every Miami surge. Six Indy players scored in double figures, led by Danny Granger’s 25—when all five Pacers starters score double-digit points, including last night, they are 7-1. LeBron James (9-21) and Dwyane Wade (7-16) had 24 points each, while Chris Bosh shot 4-11 for 14 points and just 2 rebounds. A mid-second quarter Roy Hibbert slam on LeBron, followed by a sneaky steal and bucket on the ensuing inbounds by Darren Collison (20 points) was representative of this game as a whole, as the Pacers had it going.

Apparently playing four overtimes one night and then another road game the next doesn’t faze the Utah Jazz. Kudos to them for that, as they hung tough in the Western Playoff race by dispatching of the free-falling Nets. Paul Millsap (24 points, 13 rebounds) and Al Jefferson (19 points, eight rebounds) dominated up front, making Kris Humphries’ night completely miserable. Hump was 0-6 with 2 points. New Jersey didn’t do much around him to help, either, shooting 36 percent as a team, including 3-10 for MarShon Brooks (10 points). The most energy the Nets got came from two unsurprising sources—Deron Williams, who put up 17 points and 11 dimes, and high-flyer Gerald Green, who scored 20 points and delivered one of his now-patented sky-walking alley oop finishes.

If you like beautiful basketball, here’s hoping you stayed away from Madison Square Garden last night, as both teams shot worse than 37 percent from the field and combined to commit 43 turnovers. But hey, someone had to win. No Jeremy Lin, no Amar’e Stoudemire, no problem right? Carmelo Anthony put up 28 points and 12 rebounds, Baron Davis had 13 points and 7 assists (okay, 9 turnovers) and Tyson Chandler stopped a key Brandon Jennings drive late in the game to help the Knicks hold off their top competition for the East’s final Playoff spot. New York is 7-1 under Mike Woodson’s direction and .500 overall at 25-25. The Knicks survived a first-half onslaught from Mike Dunleavy, who scored 14 of his 26 points in a 4-minute stretch of the second quarter. Lastly, an update on the Monta Ellis-Brandon Jennings backcourt, presented without comment:

Up just 2 coming out of halftime, the Nuggets used a 10-0 run to start the second half and used stifling defense to beat the Bulls, who were playing yet again without Derrick Rose. Denver forced 16 Chicago turnovers, leading to 21 points. Plus, they outrebounded the Bulls 45 to 32 and outscored Chicago 54-24 on points in the paint. Chicago’s other All-Star, Luol Deng, scored only 9 points on 3-9 shooting and had 4 turnovers. Just about the only thing the Bulls could get going was the outside shot, as they made 13 of 30 threes, including 3 of them from CJ Watson, who led the team with 17 points and 8 dimes. Oh, and the Nuggets can score, too—Ty Lawson tied his season-high with 27 points, Arron Afflalo had 22 and Denver shot 50 percent from the field.

Patrick Patterson nailed a top of the key jumper with 8 seconds remaining in regulation to send this one to overtime—part of his career-high 24 points on the night—and the Rockets outscored the Kings 14-7 in the extra period en route to the win. After signing with Houston literally an hour before tip-off, veteran point guard Earl Boykins scored 10 points, including hitting 4 of 4 free throws in the last 20 seconds of the OT to ice the game. The Rockets stay alive in the Playoff race, this time escaping with a win despite an outrageous performance from Patterson’s former college teammate at Kentucky, DeMarcus Cousins, who finished with a career-high 38 points and had 14 rebounds.

The Clippers opened the game on an 18-2 run, then let the Hornets come all the way back to tie it up at 28 early in the second quarter, only to then break the game open again and fly past New Orleans for what ended up being an easy win against the bouys from the Big Easy. Sure, Chris Paul put 25 points and 10 assists on his former team and Blake Griffin added 20 of his own. But the real reason for Lob City leading from start to finish (and by as many as 27 points) was New Orleans’ season-high 29 turnovers, which led to 35 easy points at the other end. Not a single NOLA starter scored in double figures—they were led by ex-Clipper Al-Farouq Aminu’s 15 points off the bench.

Line of the Night: DeMarcus Cousins is starting to put together some scary games, this time with a career-best 38 points, 14 rebounds and 2 assists in a loss to the Rockets.

Dunks of the Night: John Wall finishes the oop and Dwyane Wade with the putback slam. But neither were as silly as this Blake Griffin throwdown off the dribble. The exclamation point on a Clips win.