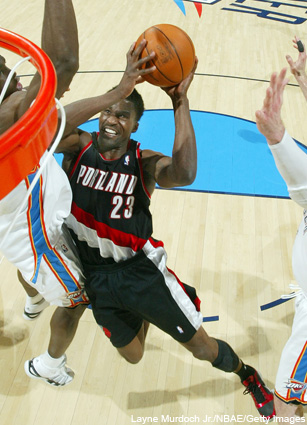 Three-way tie in the western conference playoff race. Spurs, Thunder and Blazers. The Blazers moved into a tie by defeating the Thunder while the Spurs jumped from eighth to six by taking down the Celtics. In Boston. How do you see that race shaking out? Meanwhile, in the eastern conference, the Bulls are .5 games back of the Raptors as the Heat and Bobcats continue duke it out for sixth. The Raptors lost to the Heat last night and will play the Bobcats tonight while the Bucks continue to roll.

I was at Nuggets shootaround on Friday and a reporter asked Chauncey if they were feeling a sense of urgency with 10 games remaining and it hit me, 10 games remaining. I go to practice every day and cover all of the Raptors home games and I know the time is ticking, but 10 games, that’s just two handfuls. That’s not enough. As much as I live for playoffs, playoffs means we’re one step closer to the offseason and I hate that.

I suppose the positive is that it’s also one step closer to pre-draft workouts and then the draft and then summer league. I guess it means I’m closer to watching John Wall and the rest of the rookie class of 2010. That’ll get me hyped. That’s what will get me through thinking about this season coming to a close.

Anyway… Not sure why I’m looking into the future here. Maybe because I was banking on the Raptors being in the playoffs and extending my personal season and now, with them on the bubble I’m nervous. Where are my Chicago readers who are on the other end of things and are praying the Raptors continue screwing up? What about in the west? Blazers/Thunder/Spurs fans? Who is going to miss out on the playoffs?

JJ Redick. Did you expect to see him as the top performer for a game on a team that has Dwight Howard on it’s roster? I did not. 23 points, seven rebounds and eight assists in a Magic win over the Nuggets. Impressive.

What’s also impressive was Melo hitting the game winner against the Raptors on Friday. Wow, it was a wild –broken– play and it was great. The Bucks have been impressive and last night they won in overtime against the Grizzlies as Brandon Jennings had another strong game with 29 points, seven rebounds, eight assists and four steals. So happy to see he found the shot that he had replaced for a few months there.

In Cleveland they had “Z Day” for Zydrunas Ilgauskas, but I missed that because I was working college games for The Score. Sounds like he was shown a lot of love and as usual, Bron did his thing to make sure the Cavs got their win. 34 points, seven rebounds, eight assists and three steals. Another Sunday afternoon at the office for this guy.

And for the Pistons, Charlie Villanueva and Ben Gordon combined for three points in the loss to the Bulls. What a mess that turned out to be.

The poor Timberwolves lost their 16th straight as the Suns offense exploded for 40 points in the second quarter and they were able to go from there, despite a poor effort in the second half. Amare was great, again and whenever I look at his line and see his free throws, it makes me think of what a luxury it must be –when he’s on– to know you can put him on the line and he’s going to come through. I want to see Amare vs. SA Spurs Amare this offseason. Wouldn’t that be fun?

Before I go, I’m looking forward to Gilbert Arenas getting back to playing basketball. I can’t wait until we can recap a “hot-shooting” night from Gil without silly jokes being made. I’ve got faith that we’ll get there, eventually.

Now, will one bad contract be traded for another in the NBA? Hmm. Who has the second worst deal in the L right now? Tell me this.