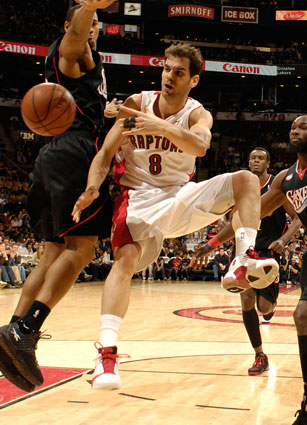 Good Morning. Welcome to the last week of the 2008-2009 NBA regular season. Kind of crazy, isn’t it? I really can’t believe it.

This was my first year in a locker room covering a team for a season. It was my first time working towards becoming comfortable in that setting and it was my first opportunity to try different things out with respect to my writing.

Because the Raptors had one hell of an awful, brokedown season, last night was their final home game and although they closed out with victory, I’m pretty sad right now. It was Easter, everyone and their dog had left the city to be with their family and I was feeling like all of the good things were coming to an end. And, I didn’t even have any chocolate to make the day a little better.

Seeing Ray Allen elbow Varejao in the balls was surprising. Jesus Shuttlesworth, it was Easter Sunday!

So…. I picked up the newest issue of SLAM Saturday night on my way to work. I didn’t get the Rubio/Jennings cover which was my first pick so I’m hoping that will be the one that gets mailed to me (hint, hint). I also picked up the remaining copies of SLAM that were on the top shelf and behind some other fitness mag and moved them front and center. I’ve done that as long as I can remember. Wherever I see SLAM, I move them to eye level before I leave the store. Anyone else do anything like this?

Dwyane Wade did his part to make me smile, dropping a career-high 55 on the Knicks last night as the Heat took down New York 122-105 thanks to a fourth quarter where they held the Knicks to just 14 points while scoring 25 themselves. The Heat jumped out to an early lead after pouring in 37 points in the opening 12 minutes and led 37-26 after one. Besides Wade’s 55 and 9 boards, Michael Beasley was huge for the Heat, scoring 28 points to go with 16 reobunds. The Knicks had 21 points apiece from Al Harrington and Wilson Chandler and David Lee had another double-double with 11 points and 11 rebounds.

The Raptors had a chance to play the spoiler against the Sixers who would clinch the fifth seed in the East if they won. For one of the few times this season, Toronto rose to the occasion and got the W, 111-104, thanks to a late steal from Shawn Marion to clinch the game. Andrea Bargnani had 17 points  and 6 blocked shots for the Raptors while Chris Bosh finished with 22, Anthony Parker added 18 and Jose Calderon had 11 points and 11 assists. The Sixers struggled as Andre Igoudala scored 21 points but had 10 turnovers. Andre Miller could not get it going as he finished 2-14 from the floor to finish with just 10 points and 4 assists. Samuel Dalembert had 21 points and 12 rebounds as his ex-Canadian national team coach watched from the sidelines and Louis Williams had 23 off of the bench.

The matchup of the day was supposed to be the Boston/Cleveland game. The Cavs quickly ended that idea as they held the Celtics to just 3-20 shooting in the first quarter and led 31-9 after one. By the third quarter it was a 30 point game and they rolled on to the 107-76 blowout while LeBron spent much of the fourth on the bench cheering his teammates on. 29 points and 7 assists for James, as the Cavs shot 55% to the C’s 35%. Delonte West and Mo Williams each scored 13 points and Zydrunas Ilgauskas added 11 points and 10 rebounds. The Celtics were led by Paul Pierce’s 14 points, but it took him 17 shots to get them. Glen Davis added 13 in the loss.

Chris Paul continutes to amaze, this time pouring in 31 points to go with 17 assists and 9 rebounds as he helped the Hornets get the big 102-92 win over the Mavericks. With David West also scoring 31 and Rasual Butler chipping in 13, the Mavericks could not keep up late, despite Dirk Nowitzki’s 29 points and 14 rebounds on the evening. Josh Howard had 15 points while Jason Terry and Brandon Bass added 13 points apiece off of the bench.

The Lakers pummeled the Grizzlies, 92-75 and Andrew Bynum scored 18 points as he continues to find his footing and shake off the rust. Kobe Bryant scored 16 points on 7-9 shooting and Pau Gasol had 12 points and 13 rebounds. Reserve Shannon Brown played 16 minutes in the game as there was talk of him potentially playing an important role in the playoffs against certain point guards the Lakers may face. OJ Mayo scored 20 points to lead the Grizzlies in defeat as Marc Gasol scored 14 and Hakim Warrick added 12 off of the bench. Memphis struggled from the floor, finishing just 36% on the evening. With their 64th victory, the Lakers still trail the Cavs for the best record in the L and would need both the Cavs to lose out while they win their game against Utah in order to grab that top spot. I’m willing to bet it doesn’t happen, with the Cavs playing Indy and Philly next.

The Spurs won 95-92 against the Sacramento Kings and without Tim Duncan, but it was a controversial win as Michael Finley knocked down a three with 1.3 second remaining after the shot clock had expired. While the shot clock clearly showed that it had expired, there was no buzzer and the red light did not go off. A review cannot be made for the shot clock and the refs counted the basket as good, sinking the Kings hopes at taking down SA. The Kings were without Kevin Martin who sat out with a sore ankle, but Spencer Hawes scored a career-high 24 points as Francisco Garcia scored 12, Andres Nocioni added 11 points and 8 rebounds and Jason Thompson 8 points and 11 boards. Tony Parker scored 25 points to go with 9 assists for the Spurs, Roger Mason scored 22 and Kurt Thomas had 9 points to go with 13 boards in the victory.