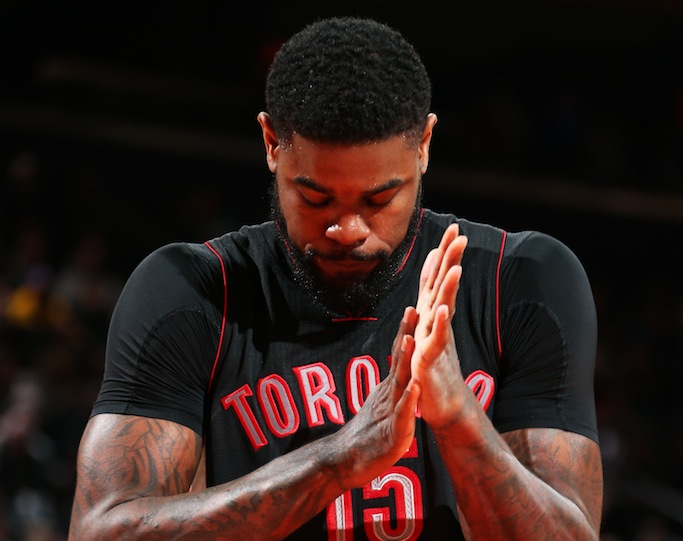 The Wizards found a way to break their six-game losing streak even though they almost let a huge second-half lead get away from them. With Paul Pierce (14 points, 5 rebounds, 5 assists) and Bradley Beal (8 points, 6 rebounds) back in the starting lineup and Marcin Gortat (16 points, 17 rebounds) more than holding his own against Detroit’s sturdy frontline, the Wiz held a 69-48 lead with 8:58 to go in the third quarter. However, Spencer Dinwiddle (20 points, 8 assists) came out of nowhere to make this game a tight one. The former Colorado Buffalo scored 16 of his 20 points in the final 14 minutes of the game. He showed an ability to get into the lane, pull up from midrange and knock down the long ball. After Dinwiddie slammed home his own missed shot at the 6:48 mark in the final quarter, the Pistons actually took the lead 85-84. However, Gortat would nail two free throws a few minutes later and give the Wizards the lead for good. With consecutive losses by the Bucks, the Wiz remain in the five slot in the East.

The Hawks have gotten back to their streaking ways as they have now strung together four straight wins. Saturday night, they did so with three of their starters getting the night off. That wasn’t a problem for Paul Millsap (22 points, 5 rebounds, 4 assists), who scored 10 points in the final 10 minutes when Atlanta took over. This game wasn’t as close down the stretch as it looks as the Hawks led 91-83 with 29.7 seconds left in the game. a couple 3-point shots in Miami’s final two possessions made the final deficit look much better. Dennis Schroder (16 points, 10 assists, 2 steals) has backed up Jeff Teague fantastically, fitting seamlessly into both the first and second unit. He filled in nicely with Teague resting, earning himself a double-double. For the Heat, they controlled the glass (47-37) thanks to another monster double-double from Hassan Whiteside (14 points, 24 rebounds, 2 blocks). It is crazy to think about what this kid has done in the little time he’s been getting quality minutes in the NBA. And now that he’s keeping his fouls down, he’s getting minutes and producing. With Goran Dragic (6 points, 6 assists) not having one of his better nights, Mario Chalmers (16 points, 5 steals) stepped up off the bench. And Chalmers almost helped spearhead a fourth-quarter comeback if it wasn’t for Millsap taking advantage of the Heat’s undersized forwards towards the end of the game.

Right as the Wizards find a way to get out of their slump Saturday night, the Raptors’ five-game losing streak hit a new low against the lowly New York Knicks. Tim Hardaway Jr. (22 points, 7 rebounds) scored 10 points in the first 12 minutes to help the Knicks build a 22-15 lead and Langston Galloway (6 points, 8 rebounds) connected on another clutch trey for the second night in a row. After making a 3-pointer to send last night’s double-overtime win into the first overtime, Galloway buries a trey with 13 seconds remaining to turn a two-point lead into a two-possession game. The Raptors had plenty of balance offensively with six guys in double figures, led by sixth man Lou Williams (22 points). However, without Lowry—who got the night off—Toronto’s offense hit a standstill late in this game. Greivis Vasquez (14 points, 6 assists) made a 3-pointer with 4:46 to go in the fourth quarter to cut the deficit to 96-87. During the next three minutes, the Knicks only managed to get one free throw from suddenly revitalized big man Lou Amundson (9 points, 3 blocks). The Raptors, though, missed their opportunity to really cut into this deficit and only managed to one more Vasquez 3-pointer. All the qualities that made Toronto so dangerous when the final quarter arrives in games seem to be slipping away, as does their spot in the two seed. They are now tied with the Bulls with the Cavs only half a game behind them.

The Timberwolves struck early, but the Grizzles handed out the final blow as they got back on track after Friday’s blowout loss to the Clippers. With Andrew Wiggins (25 points, 4 rebounds) scoring eight of his team-high 25 points in the first quarter, Minnesota held a 24-18 lead going into the second quarter. In his second game with the team, Kevin Garnett (6 points, 3 steals) bothered Marc Gasol (27 points, 11 rebounds, 2 blocks) during his time on the court. He may be limited in his abilities at this point in his career, but KG can certainly still guard. And he seems to be finding a bit of a groove with Ricky Rubio (13 points, 10 assists, 7 rebounds) so far. However, his game was cut short after he pounded the ball onto the court in the third quarter and picked up his second technical foul in the process. After Garnett left the game with 7:34 left in the third, Gasol turned his game around. The Spaniard center went on to pour in 14 points in the final 17 minutes and really take it to the now undersized and inexperienced frontcourt. Gary Neal (16 points, 3-5 on 3-pointers) and Kevin Martin (13 points, 3-8 on 3-pointers) making three after three kept Minnesota in this game before Mike Conley (17 points, 4 assists) sealed the win with a 3-pointer (from Gasol) of his own and two made free throws.

Monta Ellis (12 points, 5 assists, 3 steals) and Dirk Nowitzki (20 points, 6 rebounds) may be the Mavs’ two best players on most nights; however, Tyson Chandler might just be the most valuable piece to this struggling Dallas team. With Chandler missing Saturday’s game, the Mavs lacked an interior presence and had player grab more than seven rebounds. The Nets had three players with at least eight rebounds, led by Mason Plumlee (14 points, 10 rebounds, 3 blocks) and Thaddeus Young (16 points, 8 rebounds), who has been very productive off the bench since being traded. Offensively, Brooklyn was led by Dallas-native Deron Williams (25 points, 6 rebounds, 4-6 on 3-pointers), who picked this Nets franchise over signing with the Mavs. The current Dallas point guard in Rajon Rondo (8 points, 7 rebounds, 6 assists, 4 turnovers, 4-10 from the field, team-worst -22) continued to struggle on the offensive end of the court. Rondo had a missed layup, a missed jumper and no assists in the game’s final six minutes. Even though it should be expected for it to take time for an elite point guard to be implemented into an entirely new system for the first time in his career, the adjective “elite” is starting to look more and more like an illusion. The Mavs have now been held below 100 points for the fourth straight game—a first this season—and have fallen behind the Clippers in the standings and are currently sixth.

Even though this was the second night of a back-to-back for the Spurs and the Suns came in on a day’s rest, this one wasn’t a contest from the tipoff to the final buzzer. After scoring the first eight points of the game, San Antonio continued to pile it on by building a 24-13 lead by the end of the first quarter. It only got worse from their as the lead swelled to 75-41 by the end of the third quarter. Garbage minutes actually made this game look a little better for the Suns, who are quickly finding themselves on the outside of the playoffs looking in. With Kawhi Leonard (22 points, 10 rebounds, 3 steals, 2 blocks) leading the way, everything seemed to click for the balance Spurs, who outrebounded the undersized Suns 56-42. Leonard, Tim Duncan (6 points, 10 rebounds) and Aron Baynes (12 points, 10 rebounds) all reached double-digit boards on the night. Other than Marcus Morris’ (19 points, 7 rebounds) decent fourth quarter, there wasn’t much for Phoenix to be proud of. They couldn’t control the interior, push the pace or establish any sort of ball movement (13 assists). This might be another finish as the ninth or tenth seed for the Suns—something that has happened three times the past four seasons for this franchise.

Since the departure of Enes Kanter and the emergence of Rudy Gobert (12 points, 10 rebounds, 3 blocks, 2 steals), the Jazz have suddenly become a defensive force against high-powered offenses. Since the All-Star break, Utah has allowed only one team to score more than 82 points in five games—the other four teams ended up losing the the Jazz. Saturday night, Trey Burke (23 points, 6 assists, 5-10 on 3-pointers) seemed to make a play every time the Jazz needed one. Whether it was a deep three, nifty layup or alley-oop pass, Burke was putting on a show in the second half. And most promising of all, he only turned the ball over one time in 35 minutes. In the frontcourt, Derrick Favors (16 points, 12 rebounds, 3 blocks, 3 steals) and Gobert continue to mesh wonderfully and look like legitimate building blocks for the future. For the Bucks, they simply couldn’t make enough shots or take care of the ball. They shot 39.2 percent from the field and coughed the ball up 23 times. They were able to keep it close because the Jazz were practically just as bad, shooting 38.2 percent and turning it over 22 times. Guards Michael Carter-Williams (16 points, 4 steals) and Khris Middleton (18 points, 6 rebounds) led Milwaukee in scoring but each had only three assists to go along with their three turnovers. This low 1-to-1 ratio isn’t going to cut. And with the way the season has suddenly turned since Brandon Knight was shipped away at the deadline, management can’t be pleased. Before the All-Star break, the Bucks had won eight of their last nine, held a 30-23 record and seemed to be on the rise in the East. Now? They have gone 2-4 and are averaging only 86.3 ppg. The Jazz, on the other hand, have won four of their last five—and three of those came against playoff teams in the Blazers, Spurs and Bucks.