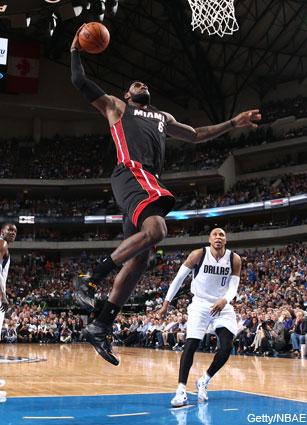 LeBron James re-announced his candidacy for the MVP award in his first game after All Star Weekend, putting up 42 points, 9 rebounds and 6 assists in a decisive road victory against the Mavericks.

James paced the Heat to a 33-21 fourth quarter advantage, which proved to be the difference in the game. Chris Bosh had 22 points and Chris Anderson was on fire with 18 of his own on 7-9 shooting. Dirk Nowitzki was as consistent as ever with 22 points, 9 rebounds and 7 assists, but no one else on the Mavericks had more than 15 points. The Mavericks have a couple of days off before starting on a three-game Eastern Conference road trip on Friday.

Even sans Tony Parker, ruled out indefinitely with “a variety of maladies,” the Spurs earned a much-needed road victory against a Western Conference contender.

San Antonio’s troubles against some of the League’s elite have been well documented this season, but the Spurs played a consistent game against a red-hot Blake Griffin, who continued his recent dominance to the tune of 35 points and 12 rebounds. Patty Mills was the sparkplug, scoring 25 points off the bench. He got help from Tim Duncan (19-13-7) and Marco Belinelli (20 points). Manu Ginobili logged 15 minutes in his return from a hamstring injury.

In a battle of (third seed) contenders in the Eastern Conference, the Raptors shot close to 57 percent from the floor to take down the Wizards.

Kyle Lowry led all scorers with 24 points and added 10 assists, but he got some major help from the bench. Toronto’s second unit combined for 43 points on 18-26 shooting, which proved to be the big difference between the two teams. Marcin Gortat had 18 points and 11 rebounds, and dunk contest champion John Wall had 22 and 7 assists.

Toronto now leads Chicago (idle on Tuesday) by 1.5 games in the race for the three seed. The Raptors are four games ahead of the Wizards, who sit in sixth place, tied with Brooklyn in the standings.

Paul George scored a game-high 26 points and the Pacers used a strong first quarter to hand the Hawks their sixth straight loss.

Indiana got consistent performances from all of its starters and wreaked havoc on the defensive end, forcing 22 Atlanta turnovers. The Hawks’ bench combined for 52 points, but Paul Millsap continued his recent struggles against the Pacers, finishing with 7 points on 3-10 shooting. In Atlanta’s last matchup versus Indiana on Feb. 4, Millsap also had 7 points.

The Pacers now sit one game back of the Thunder in the race for the best record in the NBA.

Improbably, the Cavaliers are only three games behind the eighth-place Bobcats in the Eastern Conference after winning their fifth straight game. Cleveland remains undefeated since general manager Chris Grant was fired on Feb. 6.

Fresh off winning All Star MVP, Kyrie Irving had 14 points in 24 minutes. That’s all he was needed for, and not a single Cavaliers starter logged more than 30 minutes. Anthony Bennett continues to show signs of improvement, finishing with 10 points and 11 rebounds. He has two double-doubles in his last three games.

The 76ers shot less than 36 percent as a team and have lost nine straight. Three of their last four defeats have been by at least 20 points.

The Bobcats entered Tuesday night leading the Pistons by a half game for the eighth seed in the Eastern Conference and made sure to take care of business. After Brandon Jennings tied the game at 2-2 in the opening minute, the Bobcats took the lead for good. Al Jefferson put together a masterful performance with 32 points, 12 rebounds and 7 dimes. Point guard Kemba Walker chipped in with 22 points and 6 assists.

All five Detroit starters finished in double-figures, led by Jennings with 24 points. Andre Drummond had 16 points and 22 rebounds, but it wasn’t enough to equalize the aforementioned Jefferson. At least Greg Monroe can take credit for the best play of the game though.

Mike Conley returned to the lineup for the surging Grizzlies, scoring 22 points in his first game back after suffering a sprained ankle on Jan. 31. He proved to be the difference in a tale of two halves, as Memphis looked en route to a blowout win until the Knicks mounted a late comeback.

Carmelo Anthony didn’t have a very efficient night by his standards, going 8-22 for 22 points and 11 rebounds. Rookie Tim Hardaway picked up the slack with 23 points, but the rest of the team didn’t provide much help. New York had a chance to tie in the closing seconds of the game, but Pablo Prigioni’s three-pointer went in and out. The Grizzlies have won four of their last five.

At the end of regulation, Wilson Chandler’s fadeaway jumper clanked off the rim. At the end of the overtime period, Denver big man J.J. Hickson hoisted up a desperation three that also landed off the mark.

Phoenix used a big second half from Gerald Green, who finished with 36 points, to come from behind and earn a tough win at the Pepsi Center. Markieff Morris helped keep the Suns alive with a tip-in layup to tie the game with five seconds remaining in the fourth quarter. Goran Dragic was dropping dimes all night long—14, to be exact—to go with 21 points.

Evan Fournier had a nice game for the Nuggets (25-8-4) off the bench, but Denver was uncharacteristically off on its three-point attempts, shooting 5-28 (18 percent). The Nuggets have lost five straight.

The Bucks have the worst record in the NBA and the Magic have the third-worst record in the NBA, so this recap was the natural choice to be listed last. If for some reason you decided to tune in, you were treated to a pretty close contest, with rookie point guard Nate Wolters knocking down a three-pointer with 29 seconds left to give the Bucks the lead and eventually the win. Wolters had 15 points, 8 assists and 7 rebounds in 40 minutes. Caron Butler had 21 points—all coming from beyond the arc—off the bench.

Nikola Vucevic had 19 points and 7 rebounds for Orlando, and got some help from Arron Afflalo (21 points). The Magic are an abysmal 3-24 on the road this season.