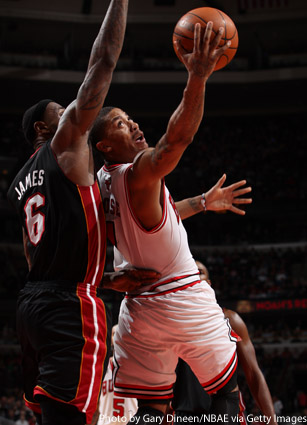 With two groups that (intentionally or not) stayed relatively quiet before yesterday’s trade deadline, this was one of the few possible match-ups that could’ve been played last night without a major or minor addition having to sit out. Before yesterday, the Bulls were seated only a few of games behind the East’s “elite”—the Celts and the Heat—and still needed to prove themselves against those two before we can really take them seriously as a Championship contender.

Well, this proof enough? Chicago stayed within elbow’s reach of Miami during the first half, then jumped ahead in the third before clawing for the win in the fourth. Late in the final quarter, a powerful LeBron James and-1 evened things up with 37 ticks remaining, but on the ensuing possession, Derrick Rose (26 points, 6 dimes) found an open Luol Deng (20 points, 10 boards) in the corner, and Deng sank the 3 without thought. With 16 seconds left, the Heat inbounded at halfcourt, and LeBron bricked a top-of-the-key J that would’ve tied it. (Does that answer your “Who takes the final shot?” question?) DWade led the Heat with 34, but I think the real lesson is an obvious one: The Bulls are very much for real. Proceed accordingly.

We probably should’ve seen this coming. The Celts, reportedly furious with the loss of ex-teammate Kendrick Perkins, didn’t seem too focused on actual basketball, while the Nuggets, fresh off a victory sans-Melo and with the new guys all eligible to play, seem to have picked up some “We can do this”-type momentum. The two were neck-and-neck for the first 44 or so minutes, but a Wilson Chandler (16 points) three-pointer sparked a game-ending, home crowd-influenced 16-0 run—not all by Chandler. Kenyon Martin led Denver with 18 points and 10 rebounds, while Paul Pierce led Boston with only 17. You’d think the low score would be good for the Celtics, who thrive in a defensive-minded dogfight, but the lack of points was more the result of poor play than tough D. The C’s now head west to L.A., where they’ll take on Blake Griffin and friends.

Last Call: Chris Bosh was 1-18 from the field, scoring 7 and delivering arguably the worst shooting performance anyone has put up all season. (Gotta be, right?) Carlos Boozer did get him pretty good on the nose here, but there’s no denying Bosh did some acting work to draw the foul. Even Reggie Miller was impressed.