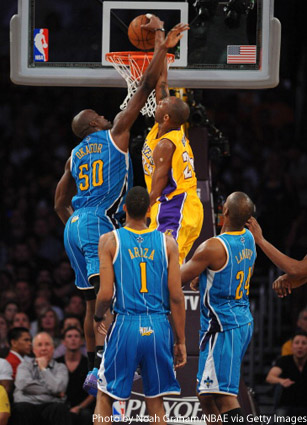 It took five games, but the Chicago Bulls finally imposed their will and crushed any and all belief that the Indiana Pacers could actually hang with them. The first four games were tough—both physically and mentally—and really could have gone either way, but when it came time to close the series out, Chicago not only did so in convincing fashion, but in the manner in which led them to 62 regular season wins.

The offense was crisp and the defense, suffocating. By the time Indiana figured out how deep of a hole they were in, the Bulls were already kicking dirt on top of them. A lot of credit should be given to Indiana because of the way that they fought in the series, but when it counted the most, they didn’t fight hard enough.

Derrick Rose led the Bulls past the first round in the Playoffs (an inevitability), making it one less thing that his detractors, or those who feel like he’s been getting a little too much attention this season, can use against him now. He came out like a man on a mission, sprained ankle be damned, and shredded the Pacers defense all night. Whether it was shooting the jumper or attacking the rim, this time, Indiana had no answers. He was not going to be stopped.

Rose also got help from Joakim Noah—whose grandfather flew all the way from Cameroon to see him play in his first NBA game—Luol Deng, Keith Bogans (Carlos Boozer, where are you?), and the notorious “Bench Mob.” All played extremely well and finally looked like the capable supporting cast that Bulls fans know they can be.

The first round was a test and Chicago passed it. Now, the second round awaits. Something Bulls fans haven’t been able to say for a long time. —Bryan Crawford (@_BryanCrawford)

The Magic finally clicked from start to finish, turning a potential elimination game into a blowout victory. The first quarter set the tone as the Magic limited the Hawks to 13 points on 3 of 19 field goals despite Dwight Howard playing only six minutes due to two early fouls.

The Magic found their outside shot, as they hit 11 of 26 threes (42.3 percent) compared to 21 of 96 (21.9 percent) entering Game 5. JJ Redick provided a huge boost off the bench, scoring 14 points on 6 of 8 shooting, but surprisingly attempting zero three-point field goals.

After Jamal Crawford and Joe Johnson scored 25 and 20 points, respectively, in Game 4, they combined for 13 points on 4 of 20 field goals in Game 5. After missing the previous game due to suspension, Jason Richardson scored 17 points on 6 of 14 field goals, including 3 of 6 from beyond the arc.

While Orlando dominated from start to finish, Howard had an uncharacteristically quiet game. He scored 8 points on 1 of 4 shooting and grabbed 8 boards. Who would have thought that the Magic would lose a game in which Howard recorded 46 points and 19 rebounds, but would decisively win a game in which he totaled 8 and 8?

The Hawks lead the series 3-2 and have a second chance to eliminate the Magic on Thursday in Game 6 at Philips Arena. —Tracy Weissenberg

Oh, who were you kidding?

This Hornets mini-run, scare-like thing was fun while it lasted. These are the sort of flings the Lakers have when they’re bored in the suburbs, want to scare their dad, want to dance all night until they feel alive, etc. etc. etc.

But it’s over now. The Lakers have to get a real job to pay rent. They outclassed the Hornets last night, winning 106-90.

A reporter asked Pau Gasol if they were making a concerted effort to play physically, to fight for rebounds with some actual zeal.

“We should do that all the time,” he said.

I should get my taxes in on time all the time. I should have a salad instead of two bags of Skittles all the time. Etc. etc. etc. Work, work, work.

There are people in this press conference room saying things like, “The Hornets crumbled like a stale…” Then they’re naming a food product.

The Hornets are one great player, Chris Paul—a shining, beautiful light buzzing gracefully, or whatever; he’s probably the best player in the playoffs—and he’s surrounded by a bunch of complete horses**t cap fillers. Their second-best player tonight was the fifth or sixth-best player on the Lakers when they won the Finals two years ago. Their third-best player was cast off the Raptors in a hurry before training camp ended so he wouldn’t mess up the promising young career of Alexis Ajinca.

Kobe only played 28 minutes. The first eight were very, very sketchy. But 20 minutes of a good, semi-bipedal Kobe Bryant is better than 48 minutes of any Hornet not named Chris Paul.

It’s unfair to Chris Paul to say this team crumbled. This team is barely a playoff team held up on one beam at the middle, and that’s exactly what their record says.

You could say the coaching was a wash, too, for three quarters. Then there was 7:22 left, the Hornets were down by 15, and Chris Paul still wasn’t back in the game. I don’t care what sort of perfect Princeton/Triangle combo you might be running. That doesn’t work. Monty Williams didn’t manage his only player correctly tonight and he was their only chance.

“There was more of a focus to be physical tonight. I know you guys saw it. A lot of it was… not basketball,” said Williams. “Our guys are going down when he goes to the basket.”

Yeah, because the Lakers finally decided to play like the team that they are.

They asked Kobe about the physicality afterwards. Kobe, the one with the sprained ankle, laughed.

“All this talk about his ankle—did it look like his ankle was hurting? Okay, then. That’s why I don’t get into all of it,” said Williams. “It is what it is.”

Don’t ruin our fling, Monty. Don’t get bitter. What we had was beautiful, but we have to move on, etc. etc. etc. —Ben Collins