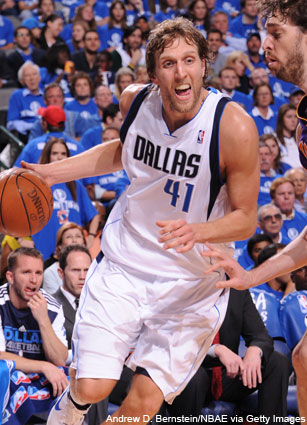 Critics like to call the Chicago Bulls a “one man show.” But when that one man show is clicking like it was yesterday, it’s the best show in the NBA.

DRose hung an MVP-like 44 points (a career high) on the Atlanta Hawks last night on 16-27 shooting from the field and 4-7 from behind the three-point line. He also had 5 rebounds, 7 assists and only committed 2 turnovers. In a word, he was unstoppa-Bull. He carried the entire team on his back as the other four starters combined to score just 21 points(!).

Rose did get some help offensively from the Bench Mob (Taj Gibson had 13 points and 11 rebounds and Kyle Korver had 11 points on 3-4 shooting from beyond the arc), but it was his performance that captivated everyone and seemed to have the Atlanta Hawks shook.

ATL did get a solid Game 3 from Josh Smith (17 points and 13 rebounds) who had been missing in the previous two games, and also got another outstanding performance from young Jeff Teague who seems to be resigning the injured Kirk Hinrich to coming off the bench next year (it won’t be the first time) with each and every game. Teague had yet another 20-point outing and committed just his second turnover in the entire series. His play has been a pleasant surprise to everyone, especially Hawks fans.

But, outside of the tremendous play of JSmoove and Teague, Atlanta didn’t get much contribution anywhere else. “Iso” Joe Johnson, Al Horford and Marvin Williams scored just 10 points apiece and Jamal Crawford only managed 7 points off the bench. In a game where you thought all of these guys would be fired up to play at home and ready to send a strong message to the Bulls by going up 2-1 in the series, they came out flat and were forced to sit back and watch the Derrick Rose show like everyone else.

Game 4 now becomes a must-win for the Atlanta. If they don’t come out and play with better energy and focus on Sunday, the next time the Hawks come back to the “A,” it could very well be to start their summer vacations. — Bryan Crawford / @_BryanCrawford

RBX said it best on “High Powered” from Dr. Dre’s classic LP, The Chronic: “I drop bombs like Hiroshima.”

The Dallas Mavericks dropped bombs on the Los Angeles Lakers Friday night and when the dust settled, they come away with a 98-92 victory to go up 3-0 in the series.

The Lakers are leveled. The Lakers are shook. The Lakers are literally on the ropes. Now it’s up to Phil Jackson and Kobe Bryant—who continued to be defiant and delusional in the post-game presser about his team’s comeback chances—to dig through the rubble to find the team’s collective basketball soul.

And Pau Gasol. For the third straight game, Gasol was MIA for L.A., finishing with a paltry 12 points and 8 rebounds. The Spaniard was at times lifeless, listless and completely owned by Dirk Nowitzki, who finished with a game-high 32 points and 9 rebounds.

This was a very winnable game for the Lakers. They were up in the fourth, but let the home team close the game on a 20-7 run. Nowitzki and Jason Terry each had seven points in the rally.

“It’s great we just didn’t panic early when they were going inside all night,” said Nowitzki. “They were up there eight in the fourth quarter and we stuck with it. We said in the huddle that we keep fighting, keep plugging away and finally got some stops and got some shots to fall on the offensive end and that was big.”

The biggest gaffe for the visitors, though, was when Derek Fisher, usually poised under pressure, fouled Terry in the waning seconds of the game when it was still just a one-possession game. Jet stepped to the charity stripe and iced both freebies to go up 95-91 and it was curtains from there.

This game defied logic in that L.A. dominated points in the paint with Andrew Bynum leading the way with a team-high 21 points and 20 rebounds. Bryant was flat, Fisher was un-clutch and Gasol was Ralph Ellison’s Invisible Man.

“It’s tough,” said Bynum. “We played hard and we just gave it away at the end. We were up 7 with 8 minutes to go and let them hit two threes. Come down and we didn’t do anything offensively. They say 3 and out in baseball, we have about 5 and out. It’s tough.”

Laker Nation will be furious, they will be speechless, they will be inconsolable, but most of all, they will demand change if Dallas completes the sweep of the defending champs on Mother’s Day.

“We’re probably shocked a little bit,” said Lamar Odom. “Sometimes it’s hard for me to understand how we find ourselves in a game like that and we don’t know how to use each other’s strengths. We’ve been through it so many times, but we’re so stubborn with each other and it caught up to us. We need to find a way to close out a game.”

Change is the operative word for the Mavs, too, as they have finally changed their mindset as a team and exorcized their Playoff demons of 2006. Even if by some grand miracle they let the Lakers steal a game or two, they have proved that they are more than just regular-season stalwarts. They proved that they can compete in the NBA’s second season with the best of them, even the defending champs.

“It’s not just Dirk and Jason,” said coach Rick Carlisle. “Everybody is focused. We’re all trying to do something that we have never done, so the focus, the determination, the discipline, and all those things, is crucial. Dirk is one of the all-time greats, there’s no doubt about that, but we’re going for the ring and that’s one thing he hasn’t done in his career, and he’s one step closer, but we have a long way to go. And getting one more game from Los Angeles is going to be a lot of hard work and we’re going to have to stay humble and stay hungry.”

Dallas is slaying the Giant right before our eyes and it’s sending a cataclysmic jolt through all of basketball. The Mavs are for real, people, it’s time you started believing it. —Maurice Bobb