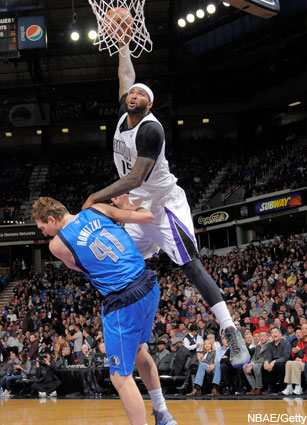 There were only six games last night, but there were some major performances from the likes of Steph Curry, Chris Paul and a trio of Kings.

No Patrick Patterson, John Salmons, Greivis Vasquez, Chuck Hayes, Rudy Gay, Aaron Gray or Quincy Acy, no problem last night for Sacto. The Kings got an easy win despite playing shorthanded (my guy Hamady Ndaiye even made a cameo appearance!)

DeMarcus Cousins was unstoppable in his 36 minutes, and finished with 32 points and 19 rebounds. He made 12/14 free throws and added 3 steals and a block. Derrick Williams finally showed real signs of life, scoring 31 points on 12/16 shooting. I think we’re all rooting for him to keep his game at that level or something near it going forward. Isaiah Thomas saw 38 minutes without Greivis around, and finished with 24 points (4 threes) and 12 dimes.

Dallas has struggled on the road, where they’re now 4-7 on the year. Dirk Nowitzki finished with 18 points (7/15), 7 assists and 6 boards, and Monta Ellis scored 21, but nobody else showed up. Vince Carter, Shawn Marion and Jose Calderon shot a combined 10/30 on the night.

Hard to believe 43 from Steph Curry wouldn’t be enough against the Bobcats, but Charlotte played a solid game on Monday night. Kemba Walker and Gerald Henderson led the team with 31 and 24, respectively, and and Josh McRoberts double-doubled with 11 and 10. Al Jefferson, Ramon Sessions and Ben Gordon each scored at least 11, too.

This game pretty much unfolded the way you’d expect it to, though Philly deserves credit for hanging in there without Michael Carter-Williams.

Chris Paul (25 and 13) double-doubled yet again, and DeAndre Jordan grabbed a massive 21 boards. Blake Griffin went for 26 and 8.

Neither of these teams created much separation all night. A Kenneth Faried bucket with 32 seconds left proved to be the game-winner for Denver as, fittingly, there were no points scored in the final half-minute.

Wilson Chandler led Denver with 17 points in the low-scoring affair. Nate Robinson added 16 off the bench in 28 minutes. Amazingly, those were the only two players in double-figures for the Nuggets.

The Wiz got 12 or more from four guys, including a game-high 20 from John Wall. Trevor Booker started in place of Nene and finished with 12 and 12.

Orlando is now just 1-10 on the road, and never really got going last night. All five starters scored in double-figures, but the team shot 40 percent overall (6/22 from deep) and got out-rebounded 52-35. Andrew Nicholson was the bright spot with 19 (8/12) and 11 while starting and seeing 37 minutes.

Memphis’ high-man was Zach Randolph, with 19. Z-Bo added 12 boards and hit 5/6 from the stripe. Jon Leuer added 16, and has developed into a solid option off the bench for Memphis this season. Mike Conley scored 13 points with 7 assists.

Utah got some nice contributions (20 from Alec Burks, 19 from Enes Kanter, 17 from Gordon Hayward, 15-6-5 from Trey Burke), but still fell short. The Jazz were simply beat by a better team.

This season, I’ll be posting a semi-random highlight video of a former baller at the bottom of my Post Ups. Today, Kevin Johnson’s ’94 posterization of Hakeem Olajuwon gets the spotlight.