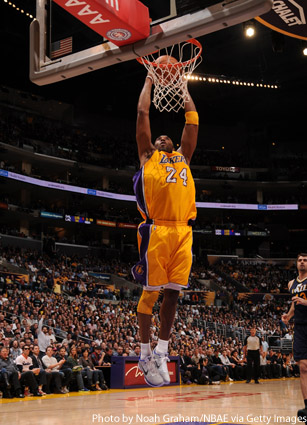 Opening up what should be a breeze of an East Coast road trip, the Nuggets went into DC and efficiently dominated the Wizards. They shot 50.6 percent from the field and 52.2 percent from deep (12 threes in total), winning their sixth of eight. (Upcoming games against the Pistons, Cavs, Sixers and Nets mean 10 of 12 is a pretty reasonable goal, too.) The Wiz, meanwhile, got 51 combined points from Andray Blatche and Nick Young in the loss.

The Cavs aren’t very good at playing basketball these days, and I’ve got the numbers to prove it: 18 losses in a row, 22 straight road losses, one win in their last 29 games, etc. Boston won this one easily, resting all of their players—except Rajon Rondo, who still may be working his way back from injury—and allowing the second unit to see some action in the contest’s final quarter. Paul Pierce scored a game-high 24, while Rondo scored 10, dished 11 and swiped 4. Kendrick Perkins also (unexpectedly) returned, playing 17 minutes and putting up a modest 7 points and 6 boards. With Shaq and Jermaine O’Neal likely to see plenty of rest over the next couple of months, the addition of Perk will be a welcome one for the C’s.

Anyone see the President’s State of the Union last night? Pres talked a lot about the future, but for some reason made zero references to Blake Griffin, who, as far as I can see (which is from my desk chair to my computer screen, give or take), is pretty much the damn future all by himself. His Clippers lost last night, though, falling to the Mavs after Dirk and Co. jumped ahead in the third and hung on in the fourth. Jason Terry led the Mavericks with 28 (a few clutch threes included), and JJ Barea stepped up to the tune of 25 points on 9-11 shooting from the floor. Blake scored 22 and grabbed 11, but with teammate Eric Gordon out three-four weeks, the Clips could struggle to maintain the fire they’ve shown the past month.

Despite shooting just 36 percent from the field, the Kings kept this shindig close, and the ‘Cats weren’t able to put them entirely away until the last minute or two. But Charlotte did come out on top, doing so behind Stephen Jackson’s 25 points and Kwame Brown’s 18 (!!) rebounds. The Bobcats now sit at eighth in the East, a full game ahead of the Pacers and with sole possession of the rights to face the Celtics in the first round.

The Lakers outscored the Jazz 37-22 in the first quarter, and just piled it on from there, as things were all but wrapped up by halftime. This was just a massacre, and all five Laker starters played under 30 minutes (except Pau, who played 10 seconds more) in the easy victory. We’ve heard that Deron Williams hasn’t been too happy, but nobody would be satisfied after a game like the one the Jazz played last night, so I’d like to think we can all sympathize with his current mood.

Moment of the Night: Nothing wild. Though as the first half of the Wiz-Nuggets ended, Trevor Booker did manage to do this: