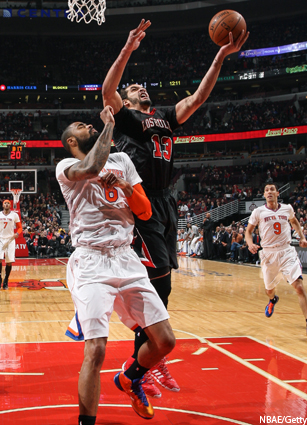 Joakim Noah (13 points, 12 rebounds, career-high 14 assists, 2 blocks, 2 steals) notched his fifth career triple-double by playing on another level Sunday afternoon while D.J. Augustin (23 points, 7-10 from the field) came alive in the 4th quarter. Before these two teams even played in the 2nd half, Noah had 11 points, 10 assists and 8 rebounds. Noah’s 14 assists is the most ever by a Bulls center and is the most by a center in the League since 1986. The Knicks had another slow start, trailing 43-18 early in the 2nd quarter. As the season keeps getting closer to the end, the Knicks seem to be going from sloppy play to uninterested play. Tyson Chandler (8 points, 22 rebounds) might have been gobbling up the boards, but he allowed plenty of easy layups right at the basket. Many of these were easy, though, due to Noah’s elite passing from the top of the key. During the start of the 4th quarter, the Knicks kept inching near the low teens in terms of the deficit. But Augustin came alive in the final quarter, scoring 21 of his 23 points. There was no Knicks guard quick enough to keep up with the Bulls sixth man. Carmelo Anthony (21 points, 8-17 from the field) had a quiet performance on the day, having 2 points off free throws in the 4th quarter. Amare Stoudemire (14 points, 6 rebounds, 6 fouls) played a great game but kept getting himself into foul trouble. Noah and Jimmy Butler (19 points, 6 rebounds, 4 assists, 3 steals) have become the leaders of scrappiness for the Bulls, as their teammates then feeds off this hustle. Chicago dished out 30 assists while New York only managed 17. Reaching 100 points in four straight games for the first time this season, the Bulls have now won nine of their last 10 games; the Knicks have lost six straight.

The Raptors had to fight for this one, as neither team ever led by double-digits, but DeMar DeRozan (32 points, 6 rebounds, 4 assists, 11-12 on free throws) was too much for Stephen Curry (34 points, 7 assists, 6 turnovers) and the Warriors. Even though DeRozan and Curry were in a scoring battle, Andre Iguodala (8 points, 6 rebounds, 5 assists) was the one called to defend DeRozan, who faired extremely well against one of the League’s best wing defenders. Toronto’s All-Star had 12 points in the 4th quarter, during which the Raptors went on an 11-0 run to take control. Curry, on the other hand, only managed 5 points to go along with 4 turnovers in the final 12 minutes. He didn’t take care of the ball as Kyle Lowry (13 points, 8 assists, 2 steals) really dug in defensively. Curry and David Lee (20 points, 11 rebounds) did most of their damage in the 1st quarter, with each player scoring 10 points. Patrick Patterson (12 points, 5 rebounds) and Greivis Vasquez (12 points, 4 assists) have really started to become the force of the Raptors’ second unit. Landry Fields (8 points, 6 rebounds) started in place of Terrence Ross (ankle). Jermaine O’Neal didn’t travel with the team because of a misplace passport. (What is worse: Tyreke Evans being stuck in an elevator or this?) Toronto will now get an extended break, not playing until Friday, March 7 against the Kings (20-39).

This might have been the closest the Sixers have gotten to winning during their current 14-game losing streak. After a Tony Wroten (12 points, 5 rebounds) 3-pointer late in the 3rd quarter, the Sixers led 67-58. Some of the Sixers actually played scrappy, effective defense against everyone not named Nikola Vucevic (18 points, 17 rebounds, 2 blocks) and Tobias Harris (31 points, 8 rebounds, 3 steals). Harris had 13 points in the first 8 minutes, finding his way to the rack. But the legitimate Philly defense was an odd sight to see. Then the Magic’s bench players stepped up as Kyle O’Quinn (8 points, 8 rebounds) and E’Twaun Moore (11 points) sparked a 21-4 Magic run late in the 3rd quarter and early in the 4th quarter. While the Magic were sprinting toward the finish line, the Sixers ran out of gas, only shooting 5-18 (27.8 percent) in the final 12 minutes. The Magic won Sunday night without Arron Afflalo (ankle) and Jameer Nelson (calf). Thaddeus Young (29 points, rebounds) probably wishes he could play his way out of Philadelphia right now…

As good as Indiana has been in the 3rd quarter on the season, they’ve also been sluggish at times in the 1st half. Paul George (22 points, 6 rebounds, 4 assists, steals) and the Pacers let the Jazz hang around for the first 24 minutes and take a 46-45 lead into halftime. If Indiana does this against quality teams during the playoffs (which in the East means the Heat), they won’t be able to dig themselves out of these type of holes. Sunday night, though, the regained control in the 3rd quarter by going on a 16-3 run and taking a 63-58 lead. This run was capped off by a C.J. Watson (13 points, 5 assists, 3 steals) 3-pointer, who did a respectable job replacing George Hill (shoulder) in the starting lineup. Indiana is actually 5-0 this season when Watson starts at the point. The Jazz kept it close the rest of the way, only trailing 90-88 after Gordon Hayward (21 points) knocked down a jumper with 7.3 seconds to go. Newcomer Evan Turner (8 points, 4 rebounds) then hit two free throws to extend the lead back to double-digits. After another big Hayward shot, from three-point range this time, Lance Stephenson (11 points, 8 rebounds, 5 assists) took his turn making two clutch free throws. The magic ran out for Hayward as he missed a last-second 3-point attempt that would have sent this one into overtime. Big men David West (game-high 25 points, 6 rebounds, 11-17 from the field) and Ian Mahinmi (9 points, 7 rebounds, 3 blocks, 3-4 from the field) both shot the ball well on the night. Derrick Favors (17 points, 10 rebounds, 3 blocks) had a double-double on the night as his Jazz should now get an easy one against the Bucks (11-47) on Monday.

What was once a fantastic in-state rivalry that featured plenty of playoff matchups as well has become something drastically different. With Tony Parker (22 points, 7 assists, 1 turnover, 10-15 from the field) returning very fresh after missing six games due to injuries, the Spurs have now won the past eight games against the Mavs. Four of these victories have been by double-digits. Tim Duncan (17 points, 9 rebounds, 2 blocks), Kawhi Leonard (16 points, 7 rebounds, 3-5 from the field) and Boris Diaw (14 points, 10 rebounds) gave Parker just enough offensive help to push their team to victory. For the Mavs, it was the same ol’ story: plenty of offense from Dirk Nowitzki (22 points, 7 rebounds), Monta Ellis (17 points, 8 assists) and a third player, which was Vince Carter (21 points, 5 assists, 3-6 on 3-pointers) Sunday night…but not enough stops down the stretch. Even though Dallas poured in 36 points in the 4th quarter, the Spurs stayed right with them and scored 34 of their own. The Mavs made plenty of shots against a good Spurs defense but couldn’t keep Parker from carving up the defense. In their defense against this specific point guard, Parker remains one of the best in the NBA at finding the holes like a running back and penetrating into the lane. He helped his team have an extremely efficient 4th quarter in which they had no turnovers over the final 12 minutes. Despite the fact that San Antonio is only now coming closer to actually being healthy, they haven’t missed a beat and are only one and a half games back for the top spot in the West. As long as Popovich remains at the helm, this team may never be down and out.

While the Hollywood stars were on the Oscars red carpet Sunday night, the NBA stars came to play in this game. Kevin Durant (28 points, 6 rebounds, 5 assists, 8-24 from the field, 12-12 on free throws), Russell Westbrook (26 points, 5 assists, 10-12 from the field) and Al Jefferson (25 points, 7 rebounds, 10-16 from the field) all got off to hot starts and sustained a high level of play for most of the game. These three combined to score 47 points by halftime. Durant didn’t have the best shooting night but he still extended an impressive streak. The 25 year old has now scored 25 points in 25 consecutive games, the League’s third-longest streak in the last 25 years. For Westbrook, it looked like the rust might finally be wearing off as he easily had his best game of the year. Westbrook also capped off a 27-9 OKC run in the 4th quarter by blocking a shot from Big Al and then knocking down a trey on the other end. By shooting 83.3 percent from the field, Westbrook set a new career-high for field goal percentage in a game. The Bobcats only had 8 turnovers going into this final quarter but almost doubled that number by turning it over 7 times during the final quarter. Other than Jefferson, Charlotte had no interior presence on either end of the floor. The Thunder outrebounded the Bobcats 44-29 and outscored them 50-32 in the paint. Kemba Walker (6 points, 4 assists, 3-13 from the field) didn’t join in on all the fun as his shot just wasn’t falling. As good as the Bobcats have been recently before losing the past two games, Walker has struggled shooting the ball. The third-year guard is shooting 41.0 percent from the field on the season and 52-151 (34.4 percent) over his last 10 games. OKC won this game without starters Thabo Sefolosha (calf) and Kendrick Perkins (groin). Perry Jones III (4 points, 2 assists) filled in nicely for Sefolosha, playing solid defense against Gerald Henderson (9 points, 2-7 from the field).

Any time a team scores 120 points and has seven players in double-figures in a regulation NBA basketball game…and still loses, there’s a good chance something went wrong defensively. It was fairly obvious this would be the case from the get-go, as the Suns poured on 40 points in the 1st quarter and 39 in the 2nd. By putting up these 79 points in the 1st half, the Suns set a League-high for points in a half this season. Gerald Green (33 points, 9-14 from the field, 5-8 on 3-pointers, 10-10 on free throws) led the way for the Suns, doing a little bit of everything offensively. I think it is safe to say this guy has broken out of his shell and found a home in Phoenix. The Morris twins (39 points, 17 rebounds) did their normal damage off the bench, being sparkplugs and not letting the pace lose a beat. Goran Dragic (19 points, 8 assists, 5 rebounds) had another strong performance while backup guard Leandro Barbosa (7 points, 13 minutes) returned after missing the past five games.  Jeff Teague (29 points, 9 assists, 6 rebounds), Mike Scott (20 points, 5 rebounds, 3 steals) and Kyle Korver (18 points, 6-7 on 3-pointers) led the way for a Hawks team that allowed the Suns to shoot 55.0 percent from the field and knock down 15 3-pointers. The Hawks seem to really be missing the interior presence of Al Horford (pectoral) and All-Star Paul Millsap (knee). After having such a promising 25-21 start to the season, Atlanta has really lost its way, losing 11 of the past 12 games.