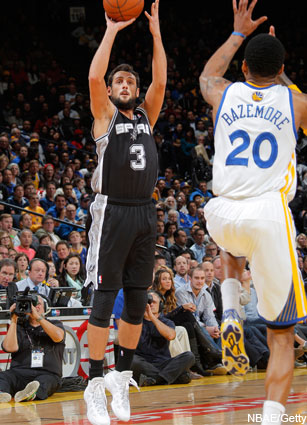 You would assume that, at home, Oklahoma City would be able to run over a depleted Bulls team. However, Chicago fought valiantly, and while they weren’t able to hand OKC its first home loss on the season, it was able to make things interesting at times.

The Bulls made things very interesting for the first half. The Thunder led by as many as 14 points during the game’s first 30 minutes, but Chicago was able to slice into that lead behind a 15-8 run late in the second quarter, and went into the locker room trailing 55-52.

However, Oklahoma City put its foot on the gas late out of the half and never looked back. The win made Oklahoma City a league-best 13-0 at home this season.

As usual, Kevin Durant (32 points, 9 rebounds, 6 assists, 3 steals) and Russell Westbrook (20 points, 10 assists) led OKC, but the Thunder got a big game out of Reggie Jackson (18 points, 5 boards). Joakim Noah led the Bulls, who were without Luol Deng and lost Jimmy Butler to an ankle injury in the second quarter, with 23 points and 12 rebounds.

Tim Duncan, Tony Parker and Manu Ginobili all got the night off. The fully healthy Warriors were playing at home. Somehow, Marco Belinelli, Patty Mills and Co. were able to knock off a team with Finals aspirations. I don’t get it, either.

The game was decided after the Spurs got an offensive rebound with five seconds left, Boris Diaw missed a layup and Tiago Splitter tipped the ball in with two seconds remaining. There was some controversy as to whether or not the ball was off the cylinder when Splitter tipped it in, but there was no call, and on the Warriors’ final possession, Stephen Curry missed a one handed heave to end the game.

Belinelli had a monster game for San Antonio, dropping 28 points on 10-16 shooting and 4-8 from downtown. Mills chipped in 20 points with 5 dimes, and Kawhi Leonard had a double-double with 21 points and 10 boards. Curry was brilliant as usual for Golden State, dropping 30 points with 15 assists and 4 steals. David Lee went for 32 points and 13 rebounds, while Andrew Bogut had 8 points, 18 boards and 3 blocks.