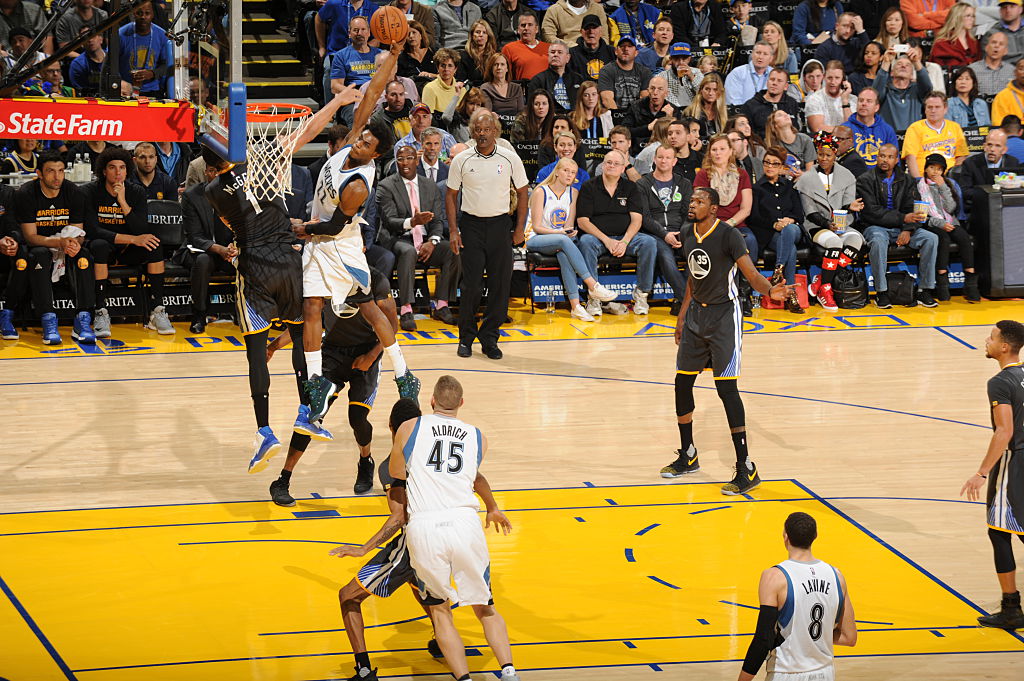 What more can be said of Russell Westbrook? After Friday’s landmark effort- becoming the first player since Magic Johnson to record a 30-point, 18-assist triple-double- Russ did his thing again on Saturday, going off for a 17/15/13 triple-double in a win over Detroit. Westbrook has now tied LeBron James’ career triple-double total, needing 395 fewer games to reach the prestigious mark.

An ankle injury may have sidelined Draymond Green for Saturday’s match-up with Karl-Anthony Towns and the Timberwolves, but the Warriors had more than enough offensive firepower to make up for it. Klay Thompson, Kevin Durant and Stephen Curry combined for 85 points, besting Zach LaVine (team-high 31 points) and the T’Wolves. Andrew Wiggins was just 6-of-15 from the floor, but pulled off one of the year’s most raucous poster jams:

The winningest road team in the NBA continued their roll, scoring 30-plus points in the second and third frames. Bradley Beal and John Wall (25 and 21 points, respectively) held up their end of the bargain, but Washington’s bench was just 8-of-24 from the field. It didn’t help matters that Markieff Morris, one of the team’s established veterans, was ejected early in the third quarter.

The Knicks put forth a durable effort at the Spectrum Center, but otherwise were unable to capture the magic of Friday’s overtime win against Charlotte. Kemba Walker scored a team-high 28 points and Frank Kaminsky added 14 (eight of which coming in the fourth quarter) to topple Kristaps Porzingis (25 points) and the Knicks. Joakim Noah- signed over the offseason on a $72 million contract- has yet to carve out a rotation spot under Jeff Hornacek. The former Florida Gator played just 12 minutes, grabbing three boards.

Griz coach David Fizdale is victorious in his return to Miami: https://t.co/8COzjaGAlj pic.twitter.com/svIYyP3BGA

Now the Grizzlies’ head coach, Fizdale enjoyed a narrow victory thanks to 11 points from Mike Conley within the game’s final three minutes. Troy Williams, who had averaged just 8.7 minutes per game entering Saturday, helped out the offensive effort with 18 points. With Zach Randolph out indefinitely, Memphis will take offense wherever they can find it.