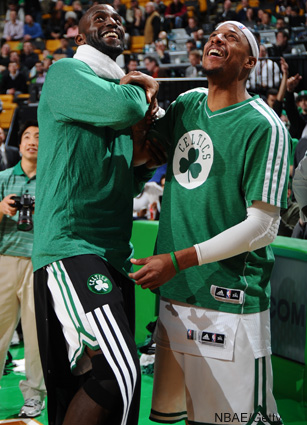 Two blowouts last night…anyone else ready for All-Star Weekend? These guys need a break (both the players and Leo and I!). I’m actually looking forward to the Dunk Contest / 3-Pt Contest for the first time in a while as well.

After winning three straight, the Lakers looked like they were turning a corner. Then it all came crashing down…again. Pau got hurt, Dwight got hurt, Kobe stays buggin’ and D’Antoni is still a terrible coach. Last night, all the problems came to the forefront in the form of a 21-point L to the red-hot Celtics. Paul Pierce scored 12 of his 24 points (he also had 7 boards and 6 assists) in the second half as Boston exploded in the third quarter to run away with this one. The Celtics ended the third on a 14-3 run that pushed their lead to 26 points and left the Lakers with absolutely no chance. Paul Pierce summed it up perfectly postgame, “Whenever you match up against the Lakers, it always feels good to give them the old fashioned beat down at your house. You know, it doesn’t matter what direction this team is going, there will always be a rivalry. You know, everybody’s always going to watch, and it feels good to win like that.” KG scored the 25,000th point of his career (Salute.) and finished with 15 points and Jeff Green scored 19 off the bench. Kobe scored 27 points on 9-15 shooting but had 0 assists and Dwight Howard tallied 9 points and 9 boards before fouling out.

Remember in the off-season when Ty Lawson said that the Nuggets were the best team in the West? Remember when everyone scoffed at him at the beginning of the season when the Nuggs got off to a slow start? Well, 128 points against the League’s best defense is no joke. Not saying they’re the best team in the West, but at 32-18, they have to be in the conversation. A Thunder-Nuggets Playoff series would be DOPE.