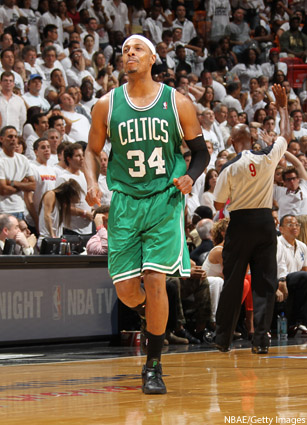 Certain moments in sports history never go forgotten. Every season, people look back and remember certain moments like landmarks in major cities. Kevin Garnett continued to keep the fans happy with his post game remarks, and if the Celtics win the 2012 NBA Championship, fans will remember his words forever. When asked about what fuels him and keeps him going during games, Garnett responded, “Competition. The naysayers, the owners who talk to much. You know, the people who don’t think a 36, 35-year-old could do what I do. I take a lot of pride on my craft; I work hard on my craft every day. I’m a true professional.”

Garnett’s approach to basketball is fascinating. Appalling sometimes, but always intriguing. He exemplifies hustle, toughness, and fortitude. He played a huge part in building the “tough guy” image of the Boston Celtics and has come up as big as any player in the conference semifinals. He continued his inspiring play with 26 points and 11 rebounds last night. His intensity and competitive fire fueled the Celtics’ late game surge, and his leadership reigned in the rest of the squad to focus on closing out the game. Paul Pierce came through when it mattered most (as usual), draining a three right in LeBron James’ grill with under a minute left to play. The craziest part for the Celtics? Rajon Rondo only netted 7 points on 3-15 shooting. If someone were to say the Celtics would win Game 5 on the road when LeBron scored 30 and Rondo only scored 7, I would have laughed as hard as I laughed after the little kid yelled “Good job! Good effort!” (which, by the way, was just about the funniest thing I’ve seen all year).

The Celtics have the Heat figured out. They aren’t letting LeBron and Wade run all over them like Games 1 and 2. They force LeBron and Wade into the same isolation basketball that doomed them in the Finals against Dallas series last year. The Cetltics take away transition and force halfcourt execution, forcing the Heat to either share the ball extremely well or knock down difficult shots on seasoned veterans. I kept saying after Games 3 and 4, “Once Miami starts really pushing the ball and using the open floor, they will control the series again. No one can stop them in the open floor for a full series. No one.” They refuse to find a way to get back to their strengths and still settle for weak half court isolations. LeBron will get his 25-30 every night, but everyone else flat out is not consistent enough to play in the halfcourt all game. Without a drastic new approach to Game 6, the Heat will find themselves open to even more criticism.

How ironic that both the Miami Heat and the San Antonio Spurs jumped out to 2-0 leads, only to lose three games in a row? The Heat and the Spurs couldn’t be more different in terms of roster breakdown and player/coach personnel, but they both find themselves in similar shoes. Not only are the Heat facing a Playoff exit, they almost surely face the end of the both the Big Three and the Erik Spoestra eras if they can’t beat the Celtics.

And how about us as fans? When was the last time we saw two phenomenal series like the current Eastern and Western Conference finals? No matter which teams advance to the NBA Finals, a fantastic storyline brews that captivates the vast majority of the general public. Like anything in life, we will think about how fast the time flew when NBA basketball ends in a couple weeks. We will think about the two absolutely special series in July, August, and September, dreaming and wishing for just one more game. We, in a sense, are spoiled with fantastic basketball right now. Soak in the greatness, and remember what Ferris said: “Life moves pretty fast. If you don’t stop and look around once and a while, you could miss it.” —Dave Spahn (@DaveSpahn)