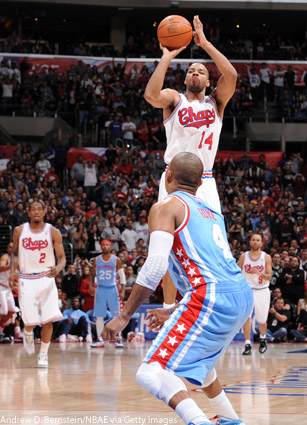 I usually don’t do weekends, but let’s give this a try…

All Chris Paul had to do was hold onto the inbounds pass with less than 10 seconds to play, and the Clips would have sewn up a rare win against San Antonio with some free throws. Unfortunately, not only did he bobble it in the backcourt, but the ball fell into the hands of Gary Neal, who he himself had just bobbled away a potential game-tying possession for the Spurs. Neal found himself lined up perfectly for a three-pointer that tied the game, since he was in the backcourt guarding Randy Foye 75 feet from the Clippers’ hoop. It was one of the crazier plays we’ve seen this year, and one that Paul post-game called “the worst play I’ve been a part of since I’ve been in the NBA.” In overtime, Neal hit the go-ahead three-pointer, and the Spurs escaped with the Clip-crushing victory—San Antonio’s 10th in a row (22-9 overall). Neal finished with 17 points (5 threes), but it was Tony Parker and Tim Duncan who led the charge for the Spurs—Parker with 30 points and 10 assists, and Duncan with 17 rebounds and 11 points. LAC wasted a 22×20 night from Blake Griffin (and his normal array of dunkage) and 21 points apiece from Paul and Randy Foye and lost in impossible fashion, dropping to 19-10 on the year.

With Derrick Rose sidelined for a fifth straight game, the Nets won their first game since February 1, and did it in relatively easy fashion. New Jersey jumped out to a monster 22-3 lead early on behind hot shooting from Kris Humphries (who finished with 24 points and 18 rebounds), and were up by 15 at the end of the first quarter. Deron Williams scored a game-high 29 points, and the Nets only turned the ball over 9 times while keeping the Bulls under 40 percent shooting for the game. New Jersey is now 9-23, and according to coach Avery Johnson, center Brook Lopez is expected to start tonight against Milwaukee. You know things were bad for Chicago when veteran Mike James (only just recently signed to a 10-day deal) was the team’s leading scorer, with 16 points off the bench, plus he had 7 assists. Carlos Boozer matched James’ 16 points, but Luol Deng shot just 5-14 (14 points) and Joakim Noah had exactly 0 points in 21 minutes.

Yesterday’s Post Up was dubbed “Right Place, Right Time.” And for the second straight day, that would have been an apt description of the Grizzlies’ late win, since this time Tony Allen was the man who tipped in a Rudy Gay last-second jumper (this one with 5 seconds to play) to lead Memphis to another win in those hideous Tams unis. Allen even admitted he was “just at the right place at the right time” as the Grizz improved to 18-14 and ruined a night when Steph Curry dropped 36 and his backcourt mate Monta Ellis went for 33 points. Gay’s miss was eerily similar to the previous night’s, and again a Memphis player snuck in for the game-winning tip—this time Allen, who finished with 11 points. Gay had 19 to lead the Grizzlies, who also got 17 and 13 from Marc Gasol and 18 points off the bench from OJ Mayo, while shooting better than 50 percent from the floor as a team. Memphis overcame 19 turnovers, and both teams led by double digits at one point in the game, but it came down to crunch time, and for a second straight night, the Gs came through in the clutch. Golden State drops to 11-17 on the year, helped in no way by Dorell Wright, who shot 0-7, scored 0 points and failed to box out Allen on the game-winning play.

Nicolas Batum had 22 points and 8 rebounds, and LaMarcus Aldridge returned with 19 points and 10 boards after missing a pair of games while nursing a sprained ankle, and the Blazers improved to 17-15, avoiding a fifth straight loss at the Rose Garden. One game after scoring zero points and having his role as the starter questioned, Raymond Felton had 14 points and 9 dimes, while Jamal Crawford played just 13 minutes and didn’t score a single point. Portland went on a 19-9 run to end the first half, and went to the break with a 52-37 lead. The Blazers—who were outrebounded in seven of their previous 8 games—won the rebounding battle 50 to 27. The Hawks, meanwhile, shot worse than 26 percent from the three-point line, and struggled to find offense outside of All-Star Joe Johnson (19 points, 8-17 shooting) and shoulda-been All-Star Josh Smith, who posted a ridiculous 14 points, 10 boards and 9 assists. JSmoove continues to put up crazy numbers, unlike his point guard, Jeff Teague, who shot 1-10 (5 points) in 30 minutes.

Line of the Night: Humphries? Parker? Griffin? Curry? Smith? I wouldn’t be mad at any of ’em.

Moment of the Night: The worst “assist” of CP3’s career, and Tony Allen’s tip-winner.

Dunk of the Night: Blake Griffin is not human.

Tonight: A 10-game sked starting with Linsanity vs. the Champs at 1 before Magic-Heat on ABC at 3:30.