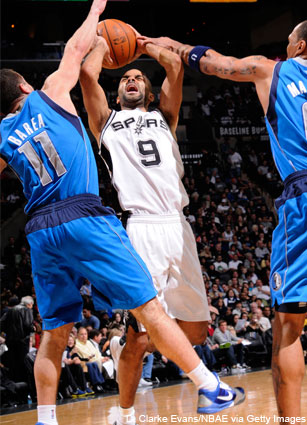 The Bulls bottled up their frustrations about a loss to Charlotte and took it out on the Pacers, leading to a win. Chicago avoided a deja-vu defensive collapse as Derrick Rose led all scorers with 29 points and 10 rebounds, busting out of a bad shooting night from the previous game. The Bulls emphasized defense and held Indiana to just 33% shooting, as Luol Deng (17 points, 5 assists) locked up Danny Granger, limiting him to 4 for 17 shooting in the first three quarters (Granger finished with 22 points on 8-of-23 shooting). Why are you still out there, Kurt Thomas? You look like you’re living up to a lost bet of running suicides until the end of time. You had 18 rebounds, you say? Carry on then.

The Mavericks continue to press “down” on their Western Conference elevator as they lose their 4th straight game, this time to the Spurs. I’m not surprised by the Dallas’ decline considering I stopped thinking of them as contenders back in the day where a Jersey shore was nothing but a peaceful coastline.  I am surprised by San Antonio’s health and well-rounded contribution, with 4 starters in double figures added to strong bench play. Enemy of ACL’s DeJuan Blair had 18 points and 13 big rebounds and Tony Parker added 18 of his own. Is TP the best off-foot lay-up finisher in the league? Some of his quick footwork would get you off a varsity team that has an anal coach, yet Parker is proof that it can be done. The good news for the Mavs is that the Dirkster’s absence only solidifies him in the MVP race. The bad news is that Brian Cardinal Offishall’s drop off at power forward is about as subtle as Barkley’s commentary. Dallas is now 2-7 without him. News flash: Tim Duncan is still dunking on people. There is no way that any of us saw that coming. Keep it up, TD!

Thanks to skip to my Lou Williams, the Sixers beat the Bucks in a late shootout. While the phrase “Lou Williams led the Sixers in scoring off the bench” might as well be copy-and-pasted into future recaps, he did just that in this game with 25 points including a clutch trey to give Philly the lead with 43 seconds left to play. Philadelphia wasted a 15-point lead and committed 16 turnovers, letting the Bucks back in the game before Williams hit the dagger. Corey Maggette led Milwaukee with 16 off the bench but the Bucks gave up on rebounding late in the game, as evidenced by a 5’5” Earl Boykins (8 points, 11 assists) grabbing his own rebound over some Australian tree. For those watching League Pass on their computers, does Boykins look like a zoom-in glitch on your screens too?

Don’t call it a comeback but T-Mac is back! McGrady led Detroit with 22 points and 5 assists with a win over Toronto, spoiling Bargnani’s night of 31 points and 9 boards. What’s more impressive is that 10 of T-Macs buckets came when the Pistons needed them most, in a third quarter offensive drought. Charlie V contributed 16 points and 8 Tweets while Greg Monroe managed to score 12 points despite only jumping a third of an inch off the ground. Great moments in Raptors’ coaching history: a team is running the exact same play against you six times in a row, how do you respond? Jay Triano: “I will show my coaching bravado by standing up instead of sitting, but shall do nothing besides that”.

The Knicks had other places to be on this night, as they slept through a loss to the Kings. Flattened by their recent road trip, New York shot an abysmal 31% and didn’t care much for Sacramento’s 22 turnovers to make use of them. While 25 points and 13 rebounds is a great off-night, Amar’e was just 6-of-22 from the field, visibly upset at his teammates’ lack of effort and energy. Beno Udrih led Sac-town with 29 points and DeMarcus Cousins stopped whining long enough to score 16 and grab 10 boards. Exactly how bad was it, you ask? The Knicks are the league’s highest-scoring team (107.8 PPG), and didn’t hit 60 points until 3 minutes into the 4th quarter. Rest up, boys. Either that or learn to shoot Andre Miller jumpers by simply raising on your toes.

The Celtics quietly re-gained their perch on top in the East with a win over the Bobcats. Thanks to whom? Shaq Diesel. The Big Green Lantern led the Celtics in scoring with 23 points (including 3-of-3 at the free throw line!) and added 5 rebounds and 5 blocks. Already thin up front and in foul trouble, Boston had to play Shaqtus a season-high 35 minutes and Big took advantage. Recent SLAM cover boy Rajon Rondo added 18 points and 13 assists while Gerald Wallace had 20 for Charlotte. Kwame Brown lived up to the hype with 8 point and 7 boards, quieting the haters as he let himself be repeatedly boxed out by players half a foot shorter than he is. Stay the course, owner Jordan! Shaq also leads the league in laughs as he fell on Kwame and used him as a pillow to get some rest before converting the and-1. Say what you want about the boys in OKC, I say Rondo/Shaq is the best 1-2 punch in the league. Not because it’s an unstoppable force, but because you don’t expect it and it still works. Defenders lay off Rondo as he chills like Brady in the pocket, then slices in to find a used Diesel still doing his job. What do you call a Shaq/Big Baby double-screen? The KFC Double Down.

The Hornets rallied from a 16-point deficit to beat the Rockets in overtime, led by David West’s 29 points. Kyle Lowry and Kevin Martin had 28 and 26 points for the Rockets, respectively, as the Rockets dropped 7 of their last 8 games. Lowry missed an off-balance jumper to send the game into overtime, where timely shots fell in New Orleans’ favour, and Chris Paul (11 points, 8 assists) scored most of his points in crunch time including a back-breaking steal and lay-up to seal the game. Though Lowry did have a crazy-looking scoop shot that he must have learned from a certain Argentinian power forward, there’s nothing like a clutch dunk and David West delivered one directly on top of Jared Jeffries.

How do you follow-up a 55 point massacre? By a 22 point loss, of course. Such were the Cavs’ plans as they lost to the Jazz to remain at the top of the league in futility. Deron Williams led Utah with 26 points and 9 assists but the Jazz got production from everyone and their dog, as six players scored in double figures, including C.J. Miles’ 20 points off the bench. Antawn “Paper Tiger” Jamison had 26 points and 11 rebounds for the Cavs and recently is quoted as saying “I don’t know how much more of this I can take”. You and me both.

Nothing like playing the New Jersey to get you back on track. Despite Brook Lopez and his 35 points, the Lakers held off the Nets to earn their seventh straight win. The Nets tried to keep it close but LA wasn’t scared since the comeback was speared by Sasha Vujacic (17 points). Kobe stopped laughing long enough to drop 27 while Gasol added 20 points and 9 rebounds.

Please remind me why this game was on national TV in Canada? We’re not that obsessed with Nash, schedule makers. Anyway, the Suns did eventually beat the Blazers thanks to Nashty’s 23 points and 13 assists. Nash hit a critical triple from the top of the key that put Phoenix ahead with 1:11 remaining. The Suns played their usual brand of lock-down defense up-tempo shoot-it-whenever-you-want style that spread the points around with 6 players in double figures as the team shot 53% overall from distance. Portland was led by Wes Matthew’s 26 points but couldn’t get stops down the stretch long enough to sustain their lead. Should the Suns trade Nash? We’ve seen that Dragic is still not comfortable without training wheels, so I say nay.

Being an NBA insider (I’m kind of a big deal), I subscribe to David Stern’s private newsletter. His most recent edition features the following candid exchange:

Griffin: “Hey, if you still want me in the dunk contest I’m going to need a night off.”

Stern: “I’ll give you something better.”

Griffin: “A trade to the Lakers?”

Stern: “No. Tonight you will be defended by David Lee and Andris Biedrins.”

Stern: “By the way, how do you feel about the bargaining agreement?”

While Blake Griffin was limited in the second half by double teams, Griff still put up 28 points and 13 rebounds in a loss to the Warriors. Attacking the resemblance of the Warriors’ front line, Griffin converted alley-oops, dunked on fools, and spun around helpless defenders on the block with ease. Monta Ellis led Golden State with 30 spectacular points (kind of hard not to when you’re guarded by Baron Davis’s shadow) while Curry added 23 and the Warriors pulled away late in a 10-0 fourth quarter run for the win. The Clippers did get buckets from other than Griffin as Eric Gordon added 28 but when the Warriors shoot as hot as they did (52%) and hit 14 three’s, you best match their shots or get out of the way. Rick Kamla mentioned that the Clippers shouldn’t trade Davis because of his alley-oops to Griffin. Really? I’m pretty sure even a bust like Johnny Flynn will resist the temptation to throw the ball into the third row long enough to oop it in Griffin’s general direction. Last question – do you think Dell Curry tells Steph “C’mon, son!” when he has a bad game?

“Check My $tats” of the night: Blake Griffin – 28 points, 13 rebounds, 3 assists, 1 steal. Not impressive enough for you? Griffin now has 14 straight 20/10 games, the longest streak since Shaq in 2001. His 25 straight double-doubles is the longest for a rookie since 1968 and he is the only player to average at least 20 points, 10 rebounds and 3 assists per game.

Separated at Birth of the day: Andrew Bogut and Ashlee Simpson.

Happy NFL divisional weekend, everyone. If you’re a fan of the Spurs/Pistons 2005 finals, then the Steelers/Ravens game is for you. Nothing like a low-scoring defensive game that you continue watching just to see some kind of result to end the agony. I’m having a tough time picking a winner of the Falcons/Packers game, party because looking at Matt Ryan makes me burst into laughter as his resemblance to the guy from 30 Rock is uncanny.