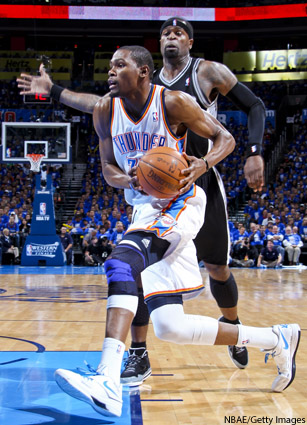 Oh, look, it’s that series we were all expecting to be awesome. It just showed up.

Thabo Sefolosha played like prime Bruce Bowen with cartoon arms and an electric motor. The second half devolved into the Thunder starting lineup doing an Oprah-esque, “Everybody gets a lob!” impression. And a pissed-off Gregg Popovich gave a mid-timeout interview where he emasculated Craig Sager to distract everyone from the fact that he didn’t want to say, “I’m not sure I have answers for this one.”

And that’s because he had no answers for this one. Oklahoma City beat San Antonio by 20 last night, 102-82. It felt like twice that.

So goes the 20-game win streak for the Spurs, who had looked like one of the all-time great Playoff teams until almost everything went wrong after the first quarter in Game 3. Pop threw in the towel with about six minutes left hoping it wasn’t a wet blanket, too.

The Spurs got run out of the gym.

The adjustments were subtle, but they were everything. Russell Westbrook didn’t spend a second chasing around Parker. This freed up Westbrook to run the offense and play true point guard all night—he had 9 assists—but it mostly gave Thabo Sefolosha the agency to play the game of his life.

Right now, in some dark room somewhere, an OKC video intern is trying to figure out how many tipped passes Thabo had in this game. And that kid will be up all night. Sefolosha ended up with 6 outright steals, but he killed plays before they started more times than Tony Parker had assists.

The guy was everywhere. We might have a resident Tony Allen in the Playoffs every year—a guy who changes a series and ruins your Twitter feed with his defense. It’s Thabo this year.

Oh, and the tips and deflections and steals? That created fastbreaks and alley-oops and energy. There was a Kevin Durant poster dunk from the second quarter that’ll be on the sole of a shoe some day, whenever he wins that first ring.

Brooks knew the second part—the footrace part. He just didn’t know how to get there. That’s Adjustment No. 2: They switched on everything.

A Duncan/Parker pick-and-roll? Okay, Perkins will switch immediately onto Parker up top, then the whole team will collapse on the drive.

Does it sound like it’ll work? No. Did it? Yep.

That’s how you freak out a team that just won 20 in a row. You’ve gotta get weird.

The Spurs will recover. That’s what the Spurs do. Gregg Popovich spent the whole fourth quarter thinking about Game 4.

But this Thunder team just got momentum and energy and a working gameplan overnight.

I don’t have one, so someone’s going to have to let me know: When you look over to your little brother and you figure out he can finally beat you—fair and square—what happens next? —Ben Collins