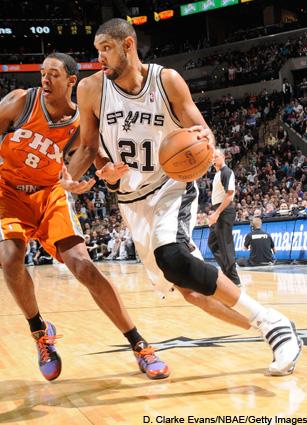 Let’s start this Monday off with a little rookie love. The Hornets rookies are awesome. Darren Collison is showing he’s a lot more than capable point guard. He’s a scorer, he’s a distributor, he’s a great leader for a player in his first year. He also hates losing. Love to see that.

The Hornets were down big, 25 points against the Mavs and they fought back to turn it into a ball game down the stretch, before falling 108-100. The Mavs sure are deep. The trade with Washington looks like it’s really going to work out for them and, they’ve got to be thinking they’re happy they made a move, now that Josh Howard is out for the season with the ACL injury. Dallas is a little scary because they’ve got so many guys who can put points on the board. They seem to fade defensively as the game wears on sometimes, but I wouldn’t want to get caught in a shootout with them.

Dirk finished with 36 points, eight rebounds and seven assists. For the Hornets, Collison finished with 35 points of his own –on 15-for-21 shooting– while Emeka Okafor had 17 rebounds in the loss.

In San Antonio, Steve Nash saved the Suns by hitting a huge three and then sank them by goofing up and giving up a three of his own in transition to feed Channing Frye who was inside the arc, when they were down three. While Nash’s miscue happened at the buzzer, Jason Richardson got a breakaway dunk that would tie the game with 41 seconds left and he missed it. My heart hurt, knowing I’ve been repping him as my dunk contest fave after Vince Carter. How could he let me down? I don’t know, but he did, Nash did and the Spurs left the court with the 113-110 victory.

In the loss, the Suns wasted a huge 41-point, 12-rebound performance from Amare Stoudemire. As my loss, I missed the Stoudemire on RJeff dunk that is apparently getting consideration for slam of the year. Agree/disagree?

In LA, the Lakers were able to out-physical the Nuggets and get the come from behind 95-89 victory, holding Denver to just 37 second half points. They survived a 3-for-17 shooting night from Kobe Bryant and saw what Ron Artest can do battling against Carmelo Anthony. After the two battled for a chunk of the second half, Ron goaded Melo into picking up his sixth foul on the offensive end. I kinda thought it was the kind of foul you don’t call, but they did and with Melo out, the momentum had shifted and LA went on the collect the W.

Melo was just 7-for-19 from the floor for his 21 points and eight turnovers. While Kobe struggled from the floor he finished with 12 assists to lead the Lakers back. Lamar Odom scored 20 points and grabbed 12 rebounds off of the bench, Pau Gasol had 15 points and 14 rebounds and Artest added 17 points.

In Oklahoma City, the Thunder rolled all over the Bosh-less Raptors and it wasn’t even as close as that 119-99 score indicates. 18 turnovers, about a million mental errors and legs that looked tired did the Raptors in. Add in little defense against one of the best defensive teams rolling right now and it was an ugly one. For Raptors fans. If you enjoy OKC, well, it was fun watching them get dunks and force turnovers and smile it up on the bench.

Okay, that’s about all I saw. If you’re in Toronto, you know there was a whole lot of celebrating and people in the streets, car horns blaring and people cheering for the better part of the evening after the gold medal hockey game. I did flip the channel from Lakers/Nuggets about two minutes before the game-winner was scored, so that was cool. We’ll just pretend I watched the rest of it.

Before I go, I have to mention Jason Kidd’s insane-o line from Friday night: 19 points, 16 rebounds, 17 assists.

Seriously. He also had a “run-in” with Mike Woodson when he ran at the coach who was stepping on the side of the court. Woodson was called for a tech and the Mavs completed their comeback against the Hawks thanks to Kidd’s huge night. While he called the move by JK, “genius” when he was asked about it postgame, I wonder how pissed Woodson really was?