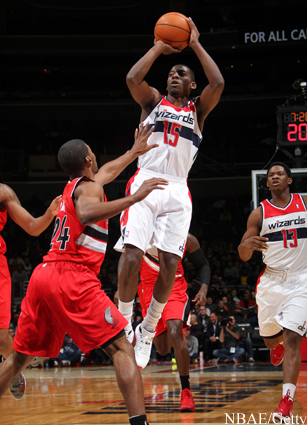 If I could “steal” one move from any player, it would be Tim Hardaway’s crossover.

They did it! The Wiz finally did it! Obviously, D.C. didn’t make it easy on themselves, or their fans, and nearly blew this one in the fourth. The Wizards ended the third quarter on a 23-7 run to take a nine-point lead but didn’t score  for nearly seven minutes of the fourth quarter. Portland reeled off a 15-0 run and tied the game at 79 with three minutes and change to play and it looked like the Wizards were on the verge of a major meltdown. But Jordan Crawford hit a huge three-pointer to break their scoreless drought and Emeka Okafor followed up with two free throws to make the score 84-82 with 40 seconds to play. Damian Lillard was called for a traveling violation but in true Wizards fashion, they gave the ball back to the Blazers after an offensive foul by Nene. The Blazers had a chance to win or tie but J.J. Hickson’s jumper drew iron and D.C. narrowly escaped with their first win.

— Wizards fans, enjoy the win now ’cause that schedule certainly doesn’t do you any favors.

The Spurs continue to roll on their current road trip, making easy work of an overmatched Orlando team. Tim Duncan scored 15 points in 27 minutes and Tony Parker scored 14 and grabbed 8 assists to help the Spurs open up a 25-point lead and cruise to a victory. San Antonio forced 17 turnovers and outscored Orlando 25-11 on the break. Man Ginobili hit four three-pointers in the first half and the Spurs hit 11 overall for the game. This one was a blowout, start to finish.

— Arron Afflalo finished with 16 and 5 rebounds and Jameer Nelson scored 14.

Rajon Rondo’s incredible double-digit assist streak came to a disappointing ending after Rondo and Kris Humprhies got into a shoving match that spilled into the stands resulting in ejections for both Humprhies and Rondo (as well as Gerald Wallace). Rondo’s streak ends at 37 straight games which is tied for the longest in NBA history. Wack.

On to the game–which was another blowout. Joe Johnson scored 18 and Andray Blatche scored 17 while grabbing 13 boards. Brooklyn extended their lead to 21 after halftime and the Celtics never got closer than nine in the fourth quarter. Yawn. On the bright side, Johnson turned Paul Pierce’s legs into jello which has now happened twice in two weeks.

The Hawks are red hot after winning their sixth straight game with a victory over the Bobcats last night. Charlotte took a 42-35 point lead with two and a half minutes to go in the second after an 18-2 run that was capped off by a MKG layup. The Hawks responded with a 17-9 run that gave them a 52-51 lead in the third. Atlanta continued to pour it on and led comfortably but in the fourth, Ben Gordon went OFF. Gordon scored 20 of his 26 points, including five three-pointers, in the fourth and nearly took down the Hawks by himself. The Bobcats trailed by 11 with three minutes remaining but went on a 10-2 run that climaxed with a heavily contested Gordon three with thirty seconds remaining that brought Charlotte within one. On the next possession, Lou Williams was forced to take a 28-foot jumper with the shot clock winding down and missed. The ball sailed over the backboard and out of bounds, giving the Bobcats a chance to win. Ramon Sessions overshot Gordon on the inbounds play, giving the ball back to the Hawks. Al Horford went on to hit two free throws to ice the game.

— Sessions finished with 18 and 8 assists.

After giving up a 27-point lead and losing to the Bucks on Monday, Chicago made damn well sure that they weren’t going to let this one slip away. After taking a one-point lead after one, the Bulls broke off a 25-7 run in the second to take a 19-point lead and put this one to bed early. Chicago got a huge contribution from the bench, a unit that has been struggling as of late. The reserves scored 50 points thanks to Nate Robinson’s 14 (and 6 assists), Jimmy Butler’s 13 and Marco Belinelli’s 11. Luol Deng led all scorers with 22.

— Joakim Noah scored a double-double with 13 points and 10 boards.

Another game, another blowout. Melo scored 29 in 30 minutes, Tyson Chandler scored 17 in 27 minutes and Steve Novak hit 5 three’s to finish with 19 points as New York cruised to an easy victory. After getting off to a hot start, the Bucks have cooled off considerably, having now lost four out of five. The Bucks hung around in the first half but after a 9-0 run late in the second made it a 10-point game. The Knicks rolled in the second half and were up by 22 in the fourth.

— Jennings and Monta Ellis combined for 35 points on 12-19 shooting but got little help from the rest of the team.

Yet another blowout down in Memphis. The Grizzlies came out flat and allowed the Raptors to keep it close heading into the half. In the third quarter, Memphis turned up the intensity and absolutely suffocated the Raptors defensively. In the third, Memphis outscored Toronto 33-14 as the Raptors only shot 23.5 percent from the field. Offensively, the Grizzlies shot 72 percent in the quarter and bullied their opponent down low. For the game, Memphis outrebounded Toronto 46-33 and outscored them in the paint 46-32. Mike Conley sat on Monday with the flu but returned strong last night. He went for 16 points (4-6 from three), 5 assists, 2 steals and 2 blocks. Marreese Speights tied his season-highs with 18 points and 12 boards while Z-Bo notched his twelfth double-double of the season with 17 points and 13 boards.

— Tony Allen stuck to DeMar DeRozan like white on rice and held the explosive guard to 16 points on 5-10 shooting.

— Are the Grizzlies the best team in basketball?

Four different Jazz players scored at least 15 points as Utah made easy work of the Hornets in New Orleans. The first half was closely contested, but much like in the Memphis-Toronto game, the Jazz turned it up defensively and forced nine turnovers in te third quarter to turn a two-point halftime lead into a 16-point spread after three. In the fourth, Gordon Hayward took over. The ever-improving forward scored 13 points in 10 minutes to preserve the lead and ensure victory for the Jazz.

— Greivis Vasquez continued his solid play with 18 points, 8 dimes and only 1 turnover.

This probably wasn’t what James Harden had envisioned his return to Oklahoma City was going to be like. Harden shot a woeful 3-16 and scored 17 points (thanks to 9 made free throws) as his former team beat the breaks off of Houston. The 120 points scored by the Thunder were a season-high and Slim Peasy was responsible for 37 of those. Durant shot 13-22 from the field, 9-10 from the line, grabbed 7 boards and handed out 4 assists as he continues to narrow the gap between he and LeBron for best player in the world (yeah, I said it). Patrick Patterson had another solid game for the Rockets, this time scoring 27 points while grabbing 6 boards.

— Chandler Parsons sat this one out with a shoulder injury. In his place was Daequan Cook who scored 18 points and grabbed 7 boards.

— Kevin Martin scored 17 off the pine.

While the Clippers were outrebounded 52-35, the inside duo of Blake Griffin and DeAndre Jordan got the best of Kevin Love and Nikola Pekovic offensively as Los Angeles outscored the Wolves 54-38 inside. Jordan, in particular, came up huge down the stretch. With Los Angeles up one with four and a half minutes to go, Jordan blocked Josh Howard’s shot attempt. On the next Clipper offensive possession, Jordan grabbed an offensive rebound then found Griffin for a dunk. Jordan then missed two free throws but made up for it with a three-point play on a fast-break dunk. Jordan then caught a 30-foot lob pass from Chauncey Billups(!) that put an exclamation point on the game. Jordan finished with 15 points, 6 boards and  2 blocks.

— Great to see Chauncey Billups back out there.