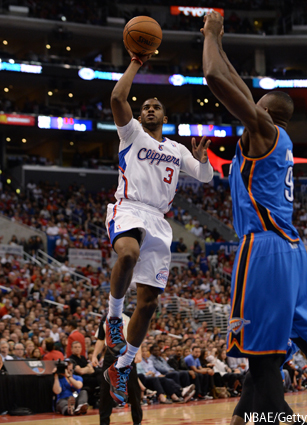 Darren Collison went streaking. The incredible speed of the L.A. Clippers backup point guard was in full motion on Sunday afternoon during the team’s stunning 101-99 come from behind victory. The former UCLA point guard appeared to be at another level of quickness in game 4, scoring 10 points during the final 7 minutes of the game to lead the Clippers to a much needed win to tie the series at two wins apiece. “We all know it’s Chris and Blake’s team, I’m just trying to play to the best of my abilities,” Collison said. “Play defense and making plays on the offensive end.”

With his team struggling against the Thunder for most of the game, Clippers coach Doc Rivers inserted a small quick lineup for the final stanza: Collison, Chris Paul, Danny Granger, Jamal Crawford and Blake Griffin. That group shot 14-22 for the quarter, causing all kinds of problems for the Thunder.

The game tied at 97, Collison faked a 3-pointer and shook Kevin Durant, driving to the basket where he blew by Serge Ibaka for a lay-up to give the Clips a 99-97 lead with under a minute left. Westbrook could not answer with a jumper on the other end and Collision once again broke free on a run out, sprinting through everyone to the cup for yet another easy layup, extending the lead to four.

LA was up two points with 13 seconds remaining, but Blake Griffin missed a shot in the key as the shot clock ran down, giving OKC the ball with about 7 seconds left. Thabo Sefalosha passed it to Russell Westbrook who quickly dribbled up court, pulling up a few feet above the 3-point line and just missing the shot that could have won it at the buzzer.

Westbrook, shot 10-22 from the floor, said the Thunder’s issues were rooted in defense. “We gave up too many lay ups, they got too many easy baskets,” he explained. “Especially when we had the lead. We will look at film and see what happened.”

The Thunder dominated the first half, jumping out to an easy 32-15 lead after the 1st quarter. L.A. inched back early in the second quarter led by Paul, but Durant’s 19 first half points pushed OKC’s lead to 57-46 at the half. The Clippers received a major spark in the 3rd from DeAndre Jordan.

Late in the quarter, Paul curled to the free throw line and pushed up a lob to Jordan who went ahead and slammed home the oop, ethering Thunder post Ibaka in the process. That brought L.A. within 10, but OKC wasn’t relinquishing its lead that easy—Reggie Jackson hit a 3-pointer in the closing seconds on the quarter and the Thunder began the 4th with a 12 point cushion.

LA’s 4th quarter explosion came from a group that Rivers wasn’t even sure he had used earlier in the season. “I’m not sure we ever used that lineup, but that group won the game for us,” he said.

During the 4th, Paul switched to guard Durant and the League’s MVP failed to hit some critical buckets despite his height advantage

At his dual post game presser with Westbrook, Durant was asked what type of challenge Paul presents to him on the defensive end. “He doesn’t,” KD said confidently. “It’s not one-on-one, when I catch the ball they send the double-team. When they didn’t, I scored. When they sent the double-team, they did a good job of crowding me and making me get rid of the ball. When it’s one-on-one, I got the advantage.”

KD finished with 40 points on 12-for-24 from the floor, but was only 1-for-7 from 3-point range. Westbrook added 27 points, 8 assists, 6 rebounds and three steals but only one other player on the Thunder finished in double figures—Reggie Jackson (10 points).

Griffin led L.A. with 25 points and 9 rebounds and CP3 added 23 points to go with a game-high 10 assists. Crawford and Collison each posted 18 points off the bench and Jordan finished with 7 points and 14 rebounds.

What Vogel probably meant to say was that momentum can change several times in any game. For his Pacers, they got the final momentum swing in Game 5 and completed a massive comeback from a 19-point deficit in the second half to beat the Wizards and take a commanding 3-1 lead in the series.

Paul George strapped his Pacers teammates on his back in his 46 minutes. He dropped in a career Playoff-high 39 points, 28 of them in the second half while playing his tail off on defense, as Indiana came flying back into the game.

“I tried to do whatever coach needed from me,” George said to the media after the game. “I had it in my head I was going to pretty much go the whole distance.”

After their comeback, the Pacers had trouble closing it out in a wild final minute that featured missed free throws and head-scratching turnovers by both teams. The Pacers forced a Wizards miss leading by three, but Lance Stephenson (8 points, 9 rebounds, 6 assists) handed the ball right back to the Wizards, leading to Bradley Beal (20 points, 5 rebounds, 5 assists, 3 steals) earning a trip to the line, where he split his pair. After George Hill (15 points) did the same, Washington had one last chance to tie it up with a triple, but Trevor Ariza threw an errant inbounds pass, ending the Wizards’ chances.

For the third straight game, Roy Hibbert (17 points, 9 rebounds 2 blocks) came up big for Indy. After looking like the bumbling giant the Internet has made him out to be early on, Big Roy turned it on in the third quarter as the Pacers made their run. The center put up 9 points, 7 rebounds and both of his blocks in the third, coming up with big buckets around the hoop. George was going in throughout the quarter as well, knocking down four triples and scoring 13 points in the frame as the Pacers chipped away at a 17-point halftime hole and got the game within a point going into the fourth.

At the start, the game looked like it would be played on Washington’s terms. After coach Randy Wittman called his out squad for not getting out in transition in their Game 3 dud, the Wizards came out flying in Game 4. They scored 18 fastbreak points in the first half, sprinting past the Pacers after Indy hit 8-9 shots to start the game. John Wall (12 points, 4-11 shooting, 7 assists) pushed the pace and racked up 5 assists in the first 24 minutes, and he wrapped the half up with a spectacular behind-the-back layup.

There were more numbers that pointed to Washington being the better team in this game, including bench scoring. The Wizards’ “AARP” unit, including vets Drew Gooden (10 points, 3 blocks), Al Harrington (11 points, 6 rebounds) and Andre Miller (7 points, 4 assists) got their team moving, as Washington’s bench outscored the Pacers’ reserves 32-2.

But after all that running in the first half that staked the Wiz to their big lead, the Pacers shut it down in the second half. The Wizards didn’t score a single fastbreak point in the second half and failed to execute throughout the half as they got dragged into the Pacers’ defensive grind.

“We stopped playing our game and style and pace of the game, and we started playing their style,” Ariza told NBATV after the game.

Washington will have to find a way to keep the pace to their liking and make smart plays in Game 5 if they want to bring the series back to the nation’s capital. The Pacers can send them fishing on Tuesday.—Brett Weisband