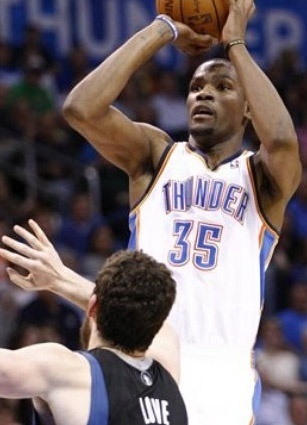 Ten game caps for your enjoyment on this Saturday morning…

The Raptors ended both their three game losing streak and the Knicks five game winning streak all in one fell swoop last night. Toronto never trailed in the game and led by as many as 17; holding the Knicks to 37 percent shooting while forcing 22 turnovers. DeMar DeRozan paced the Raptors with 30 points and Andrea Bargnani (who always seems to beat up on New York) finished with 21 points and 7 boards. The Knicks shot an abysmal 5-28 from behind the arc and never had a chance in this one. STAT had 17, Steve Novak scored 15 and Melo finished with 12 points and 9 boards.

The new-look Bucks came out firing last night and beat up on the hapless Charlotte Bobcats, cruising to an easy twenty-point dub. Milwaukee went on a 16-2 run between the first and second quarters that saw them turn a five point deficit into a nine point lead. Milwaukee eventually pushed the lead to 20 by dominating the paint; 72 of their 112 points came inside and they outrebounded Charlotte 47-37. Luc Mbah Moute led the Bucks with 20 points and Drew Gooden grabbed 12 boards. Gerald Henderson scored a game-high 29, but the Bobcats allowed four out of the five Milwaukee starters to score in double-digits and only shot 40 percent from the field for the game.

The up-and-down Magic showed their better side last night and made light work of Cleveland down in Orlando. The Magic led by 11 after the first quarter and never felt threatened after that as the Cavs struggled on both ends of the floor. Orlando hit 13 out of their first 20 shots, including five three pointers and led from the end of the first through the end of the game. Dwight Howard had a double-double with 16 points and 13 boards and Ryan Anderson had a game-high 17. Despite having five players score in double-figures, the Cavs shot under 40 percent from the field and 4-18 from three.

In a game that saw some of the league’s finest young players have a big night, it was the old man, Steve Nash who was the best player on the court. Nash took over in the second half, scoring all 12 of his points and dropping 10 of his 17 dimes to carry the Suns to a two-point road victory. The Pacers used a 9-0 run to take a 61-54 lead into the half, but the Suns responded with an 18-7 run of their own in the third quarter to take a seven-point lead into the fourth; a lead they would never relinquish. Marcin Gortat finished with 23 points and 8 boards and Grant Hill scored 22 on 9-16 shooting. Danny Granger led all scorers with 28, Roy Hibbert scored 19 and grabbed 7 boards and Paul George had 15 to pace Indiana.

Josh Smith put together another monster performance, this time scoring 13 of his 30 points in the final quarter to help the Hawks come from behind to beat the Nets in Atlanta. The Hawks used Smith’s huge fourth quarter to outscore New Jersey 31-15 and tightened up the screws on defense and forced the Nets to shoot 5-18 down the stretch. Jersey was up most of the game, but when Avery Johnson decided to go with his bench to start the fourth, things fell apart and the Nets let one slip through the cracks. Jeff Teague finished with 17 points and 6 dimes and Joe Johnson chipped in with 16. For the Nets, Deron WIlliams had 20 points and 8 dimes and Krish Humphries had 17 and 8 boards.

The Heat got a strong performance from their bench helping them win their fourth straight game in a drubbing of the Pistons out in Detroit. In the second quarter, Miami’s reserve players took over and Shane Battier led the way with nine points and four rebounds helping the Heat outscore Detroit 32-16 in the period. LeBron James finished with an impressive stat line of 17 points, 10 dimes and 6 rebounds while Dwyane Wade scored a game-high 24. Detroit was led by rookie Brandon Knight’s 18 points but the Pistons had no chance in this one as Miami came out and held the Pistons to just 29 field goals.

Philly turned a six-point halftime deficit into a 14-point lead in the third quarter by outhustling and outscoring the Celtics 37-17 in the period. The Sixers outrebounded the Celtics 46-35 overall and 14-3 on the offensive glass. Six Philadelphia players scored in double-digits, led by Elton Brand’s 20, Lou Will’s 19 off the bench, Jrue Holiday’s 15 and Iguodala’s 14. Boston has been really weak in the paint all year and last night the Sixers destroyed them inside by a margin of 46-24. Kevin Garnett and Paul Pierce each scored 20 and Brandon Bass had 18, but with the loss the Celtics had their two-game win streak snapped.

Kevin Love had a franchise-record 51 points and 14 rebounds, J.J. Barea had a triple-double, Kevin Durant had 40 and 17, and Russell Westbrook finished with 45 and 6 dimes as the fans got their money’s worth in a double-overtime thriller in Oklahoma City. Both teams battled back and forth and left it all on the court as each team’s superstars stepped up and hit big shots when their team needed them most. After Durant hit a clutch three to put OKC up three with seconds remaining, Kevin Love responded with a tying three of his own to send the game into overtime. In the first overtime period, both teams played each other equal until the final minute when Minnesota finally took the lead. But, Kevin Durant hit a corner three with the clock winding down to force another extra session. In the second overtime period, the Wolves finally ran out of gas and the Russell Westbrook was able to take over and score nine of his points down the stretch to put the Thunder over the hump and notch another one in the win column. Anthony Tolliver finished with 23 points, and James Harden wound up with 25.

The Spurs used a 22-2 run that spawned over the end of the third quarter and into the fourth to beat up on their conference rivals last night down in Texas. Danny Green, who has been having a huge March, led the Spurs with 18 points while Tim Duncan finished with a double-double of 15 points and 12 boards. Tony Parker was sidelined with his hamstring injury. Jason Terry led the Mavs with 18 points and Dirk had 16 but the Mavs had no answer for the Spurs defensively late in the contest.

All five Jazz players scored in double-digits as Utah took care of Denver out in Salt Lake City last night. All Jefferson finished with 23 points and 8 boards and second-year pro Gordon Hayward had an impressive stat line of 15 points, 7 boards, and seven dimes–he’s really surprised me with his play this season. Utah finished with 64 points in the paint and shot just under 6o percent from the field–Denver just looked lost defensively. Al Harrington finished with 20 and 10 off the bench, Kenneth Faried had 16 and WIlson Chandler had 13.

Ramon Sessions finished with 20 points and 11 dimes in his first start in a Laker uniform and all of a sudden, Los Angeles looks very dangerous heading into the final stretch of the season. Andrew Bynum finished with a team-high 28 points and 9 boards and Kobe had 18 and 5 boards. The Lakers finished with a season-high 33 assists and now lead the Clippers by three and a half games in the Pacific Division. LaMarcus Aldridge led all scorers with 29 points and grabbed 9 boards, Wesley Matthews had 16 and in his Blazer debut, J.J. Hickson came off the bench and scored 14.

Stat Line of the Night: Kevin Love with 51 points and 14 boards–that speaks for itself.

Dunk of the Night: Quincy Acy catches the inbounds alley.

Tonight: Abe is subbing in for me to take you through nine games. One.