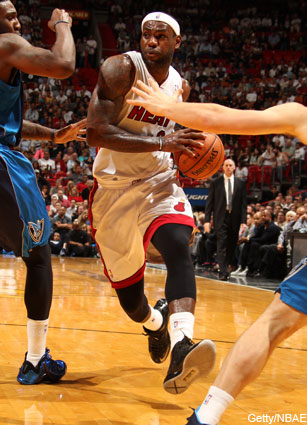 The Pacers continue to accumulate wins, and after cruising past the Bucks on Friday, remain as the only unbeaten team in the League at 9-0. Roy Hibbert scored 24 points, grabbed 10 rebounds and blocked 8 shots(!). Paul George chipped in 24 and Lance Stephenson 11, and the Pacers shot 51 percent as a team. Milwaukee, on the other hand, was held to 34 percent shooting, and now dropped to 2-6 on the year. Indiana is the first team to start 9-0 since the 2002 Dallas Mavericks. Take notice if you haven’t already.

Despite playing without Derrick Rose, and letting DeMar DeRozan drop 37 points on their head, Chicago cruised past the Raptors on Friday night. All five Bulls starters scored in double figures, and four of the five starters grabbed at least 7 rebounds. Carlos Boozer posted a 14-point, 8-rebound, 6-assist line, while Joakim Noah (7-10) chipped in with 18 points and 9 rebounds.

Rudy Gay scored 20 points and grabbed 9 rebounds, but no other Toronto player other than Gay and DeRozan scored in double figures. Toronto was 5-21 from the field in the second half, and dropped to 4-6 with the loss. The Bulls take on the Pacers tonight in their first back-to-back of the season.

Jeff Teague exploded for a career-high 33 points to pace the Hawks to victory. Teague added 10 assists, and Al Horford contributed with 27 points. The Hawks have now won three of four, while the Sixers—who were playing without rookie and second-leading scorer Michael Carter-Williams (bruised foot) for the second time in as many games—dropped to 5-5 on the season, while the Hawks improved to 5-4.

Two other tidbits that should make Hawks fans happy: DeMarre Carroll scored a career-high 21 points, while guard Lou Williams made his long-awaited return to the court for the first time since undergoing ACL surgery 10 months ago. Welcome back, Lou.

Don’t look now, but the Trail Blazers are 7-2. Behind LaMarcus Aldridge’s 27 points and 12 rebounds. Nic Batum chipped in 18 points to help give Portland its first win in Boston since 2004. Sophomore Thomas Robinson had an efficient 8 points and 4 rebounds in 12 minutes, and the timeless Mo Williams had a quick 18 points and 8 assists. The Blazers will take their five-game winning streak to Toronto on Sunday.

Jared Sullinger was the lone bright spot for the Celtics, scoring 26 points and grabbing 8 rebounds. The Celtics, who have lost two in a row and head to Minnesota for a showdown with the Timberwolves tonight.

I’ll let SLAM favorite Michael Kidd-Gilchrist tell it: “It’s a new season, new guys, a new staff, new everything…I’ll take this win. I’ll take any win we can get this season. One step at a time.”

MKG recorded 16 points and 8 rebounds—including 8 points in the fourth quarter—to help the Bobcats turn a double-digit third quarter deficit into a semi-impressive road win. Kemba Walker pitched in a 12-point, 7-assist, 5-rebound, 5-steal night, and Bismack Biyombo grabbed 12 rebounds to help the Bobcats improve to 5-4. Kyrie Irving scored 18 points and dished out 10 assists for the Cavs, who have now lost three straight and five of six. Worst of all, though, Cleveland is horrible 0-6 on the road this season.

Can’t really argue with LeBron there. King James scored 39 points on 18 shots (!) and grabbed 6 rebounds, and Dwyane Wade pitched in a smooth 17 points, 8 assists and career-best 8 steals to pace the Heat. Wade joined Tim Hardaway as the second player in Heat history with an 8-assist, 8-steal game.

Dirk Nowitzki scored 28 points for Dallas, while Monta Ellis and Vince Carter added 20 and 21, respectively. The Mavs drop to 5-4, but they are playing solid basketball for what they have to offer. Dallas’ four losses have been at Houston, at OKC, at Minnesota and at Miami, and all four of those games were competitive throughout.

Class was in session last night, and The Professor delivered quite the lecture.

Andre Miller didn’t win the game for Denver, but he nonetheless sealed it. Leading 116-113 with 15 seconds remaining, Wilson Chandler missed the second of two free throws. Miller came from out of sight—as in, from the three-point line—to corral the offensive rebound and effectively seal the victory. The Professor was fouled and made one of two free throws to get Denver back to .500 on the season.

Kevin Love and Kevin Martin scored 28 and 27 points, respectively, but it wasn’t enough to give Minnesota a road victory. The T-Wolves dropped to 6-4, while the Nuggets are now at 4-4.

With the game tied at 98-98 and the clock winding down, Kevin Garnett tipped a loose ball to Joe Johnson, who proceeded to glide up the court and sink a smooth tear-drop as time expired. Johnson scored just 13 points on 6-19 shooting, but no doubt came through when his team needed him the most.

Brook Lopez scored 27 points (25 of his 27 came in the second half and overtime), to go along with 7 rebounds and 3 blocks, and Shaun Livingston scored 18 points and dished 6 assists off the bench to help the Nets get their first road win of the season.

Brooklyn’s victory was bittersweet, however, because starting point guard Deron Williams left the game with a sprained left ankle mid-way through the first quarter. Williams landed awkwardly on Miles Plumlee’s rebound following a close-range shot, and was in visible pain. He left the game and did not return. Get well soon, DWill.

For the Suns, four starters scored in double figures, led by Goran Dragic’s 19 points and 10 assists in 46 minutes. They drop to 5-4 on the season, while the Nets improve to 3-5.

A monster night from up-and-coming forward Derrick Favors (20 points, 18 rebounds and 3 blocks) wasn’t enough to stop Tony Parker and Co., as the Spurs edged out the Jazz 91-82. San Antonio improved to 9-1 on the season behind Parker’s 22 points and 6 assists. The timeless Tim Duncan chipped in 14 points and 9 rebounds, and Boris Diaw had 17 points and five rebounds.

All five Jazz starters scored in double figures, but after a 29-14 lead at the end of the first quarter, Utah quickly surrendered the lead and played from behind. With the loss, Ty Corbin’s group fell to 1-9 on the season.

Zach Randolph scored 14 of his 28 points in the fourth quarter, and Marc Gasol contributed with 18 points, 8 rebounds and 8 assists to help Memphis earn its first road victory of the season, defeating the Lakers 89-86 at the Staples Center.

For a team that finished with a 24-17 road record last season—which was the third-best road record in the NBA—this was a necessary win. Jodie Meeks had 25 pints for the Lakers, who were once again playing without Steve Nash. The older Gasol scored 10 points and grabbed 13 rebounds, but it just wasn’t enough to overtake Memphis grit-and-grind approach. The Grizzlies improved to 4-5 on the season, while the Lakers now stand at 4-7.

Josh Smith had his best game as a member of the Pistons, recording 21 points, 8 rebounds, 7 assists, 5 steals and 4 blocks to help Detroit earn a 97-90 road victory in Sacramento. Detroit slowly built a double-digit lead heading into the fourth, and controlled the game down the stretch to easily secure the victory. Andre Drummond had a monster 15-point, 18-rebound outing, and Rodney Stuckey pitched in 16 points in 30 minutes off the bench.

DeMarcus Cousins did his usual thing, scoring 26 points and grabbing 13 rebounds, but the Kings had 17 turnovers and couldn’t establish a rhythm. Sacramento has lost six of seven, and dropped to 2-6 on the year. The Pistons earned their first road win of the season and improved to 3-5.

Even though they lost, the always-inspired Kings fans got extra-hyped for the team’s first national TV game of the season. Last night, the fans at Sleep Train Arena set a Guinness world record for loudest noise at an indoor arena at 126.0 decibels. The Cowbells probably had something to do with the record-breaking performance, but this was nonetheless a fitting achievement. The Kings have long had one of the most dedicated and supportive fan bases, and if the team starts winning, will certainly get even louder.