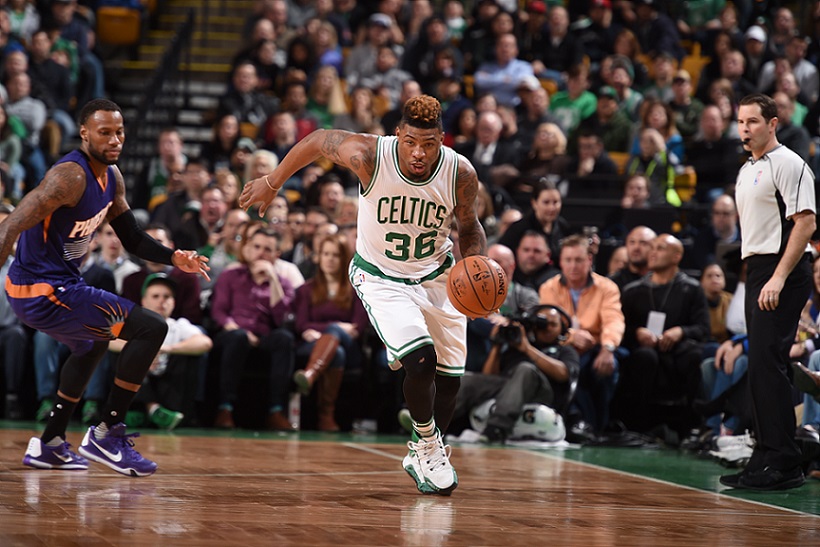 Marcus Smart poured in his first career triple-double, while Jae Crowder, Avery Bradley, and Kelly Olynyk all contributed at least 17 points. Coach Brad Stevens won’t commit to any set rotation, yielding mixed results. The Celtics looked terrific against the 13-28 Suns, but recently recovered from a four-game skid. While still holding on to the eighth seed in the Eastern Conference, it remains to be seen whether the Celtics can be a viable contender this season.

A throw-in dunk from Emmanuel Mudiay represented the sole blemish of an otherwise masterful performance from Hassan Whiteside.

Indeed, Whiteside’s unprecedented shot-blocking ability has transformed him into one of the league’s most feared big men. Helping out the cause in Friday’s close victory were Chris Bosh and Tyler Johnson, adding 24 and 15 points, respectively. The beat goes on for the struggling Nuggets, who snapped a two-game winning streak despite strong play from Nikola Jokic.

…And finally, our third triple-double of the night came from Russell Westbrook, a guy who knows a little something about filling stat sheets. Posting a 10/11/10 line, Westbrook was one of six OKC players to score in the double-digits in a comfortable win over the T’Wolves. Minnesota is always a fun team to watch, but like any young team, will have to endure some growing pains before entering contention.

John Wall went off for 28 points, while Bradley Beal chipped in 22 off the bench to propel the Wizards to their fourth straight W. Paul George, whose 21 points were a team-high, was none too pleased with his Indiana’s effort in their second straight loss.

“Poor effort. Poor effort on both ends of the floor. They took the fight to us. It’s like they were comfortable from the get-go,” George said. “You can’t let a team get comfortable, especially when it’s the point guard and their best player. That’s the head of the snake. We should never lose games like this, especially at home, where a team comes in and pushes the tempo and establishes how they’re going to play.”

Aside from a smooth cross-over from Taj Gibson, there weren’t many positives to take away from this contest for Chicago. Joakim Noah, whose 16-rebound performance against the 76ers on Thursday indicated a full recovery from a shoulder tear, re-aggravated the injury, and initial reports aren’t optimistic.

Jrue Holliday set up Anthony Davis for a game-deciding alley-oop at the end of regulation, handing Charlotte their eighth loss in the past nine games. Frank Kaminsky impressed with 18 points on 7-of-9 shooting, and Kemba Walker combined with Nicolas Batum for 50 points, but the Hornets’ prolonged losing streak dug a considerable hole in the Eastern Conference. The perennially underrated Ryan Anderson anchored New Orleans’ offense with 32 points.

Despite a posterizing dunk from Paul Millsap early on, the Hawks absorbed a difficult OT loss thanks to a 28-point effort from the Greek Freak. Atlanta faced a deficit at the end of regulation; playing most of overtime without Millsap and Kent Bazemore, who each fouled out.

The Rockets committed 18 turnovers and shot just 35.1 percent from the field en route to a lopsided defeat to the Cavs. Posting a smooth 19/7/7 line on the night, King James pulled off an improbable task on this alley-oop feed.