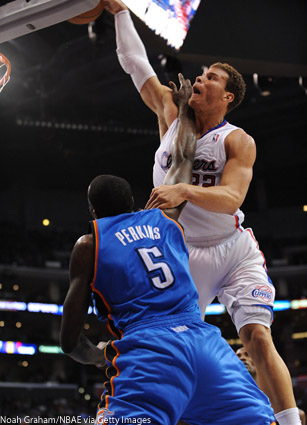 You’ll never hear me complain about staying up late to watch and write about basketball. But I’d be lying if I told you it wasn’t a grind sometimes. And then, just when my wrists start to hurt, my eyes start to fade and my exhaustion level spikes, I get a shot of adrenaline like last night, in the form of Mr. Blake Griffin and his ridiculous aerial exploits. Hope you were parked in front of an HD screen to enjoy his awesomeness, and the rest of last night’s games.

Woof. To call this game ugly would be an understatement. Orlando shot 33 percent from the field and 32 percent from three-point land, while Philadelphia shot 38 percent from the field and 27 percent from deep. A total of 14 fast break points were scored in the game. How bad was it? These two teams couldn’t even hit from the free throw line—the Magic were 10-of-22 (46 percent) and the Sixers shot 10-of-19 (53 percent). Put it this way, there were so many missed shots in this game that Ryan Anderson ended up with 20 rebounds, to go with his 14 points. In the third quarter, the Magic scored 9 points, and heading into the fourth, they had 42 points. For reference sake, the Timberwolves scored 42 points in the third quarter alone of their game against the Rockets last night. Crummy as the offense was, at least Big Baby was hustling! Dwight Howard made 6 of 17 shots from the field, and was 5-for-13 from the charity stripe, struggling his way to 17 points and 11 boards, while Andre Iguodala led the Sixers with 14 points, 11 rebounds and 6 assists.

Derrick Rose scored 13 points in his first 12 minutes (he finished with a season-high 35), helping Chicago jump out to a 26-16 lead after one quarter—and the Bulls won by that margin of 10. Think DRose was motivated by the way he finished the previous game against Miami? Chicago played great defense while improving to an Eastern Conference-best 18-5. In the first half, John Wall and Javale McGee shot 9-of-16, while their teammates were 6-of-31. And yet, somehow the Wizards trailed by only 11 at the break. But even when Washington was able to cut the lead to single digits in the fourth quarter, the Bulls just had too much firepower. Kyle Korver hit 5 threes (17 points) and Carlos Boozer (18 points, 8 rebounds) and Joakim  Noah (14 points, 13 boards, 7 assists!) were too much up front for the Wiz, who went to a full-court press defense late in the game, which turned the game into a bit of a scrum. Wall finished with 20 points on 7-16 shooting and McGee had 16 and 9 for DC, which never led despite having a 16-5 advantage in fast break points.

For a quarter, it looked like Miami might be suffering a post-big win hangover after escaping the Bulls on Sunday, as the Hornets took a 29-27 lead after the first 12 minutes. But then the Heat turned up the…heat (I’m hilarious). Over the second and third quarters, they outscored New Orleans 60-39. LeBron James scored 22 points (3 the hard way here) plus 11 rebounds and 8 assists and Dwyane Wade had 22 (3 even harder) to lead Miami, which got to 16-5 on the year with the win. The Heat shot 55 percent, scored 25 points in transition, and led by as many as 27 in a game that wasn’t nearly as close as the score suggests once Miami got rolling in the second half. The Hornets shot 53 percent and got 14 apiece from Carl Landry and Jarrett Jack, but were outrebounded 39-25 and just couldn’t keep up with the Heatles after halftime. NOLA has now lost 11 of 12 games.

Brandon Jennings scored 21 points and Mike Dunleavy notched a season-high with 21 off the bench as the Bucks laid the beatdown on the Pistons from the jump to get to 9-11 on the year. Milwaukee shot 51 percent from the field, including 10 of 17 from beyond the arc, while holding the Pistons to 39 percent shooting and just 1 three-pointer on the night. After a three-game losing streak, the Bucks have now won four of their last six games. Drew Gooden scored 10 straight points during a 12-2 Milwaukee run to open the second half, and finished with 16. Oddly enough, the Pistons scored 40 points in the paint, to just 18 for the Bucks, but Detroit was never really in the game and fell to 4-18 (1-10 on the road). Greg Monroe chipped in his nightly double-double contribution with 16 and 10, and Rodney Stuckey scored 19 points to pace the Pistons.

San Antonio stopped a two-game skid thanks to 5 three-pointers from Matt Bonner (15 points) and great defense, holding the Grizzlies to 37 percent field goal shooting and Memphis’ leading scorer, Rudy Gay, to just 1 point (0-7 FGs). Marc Gasol, the second-leading scorer for the Grizz, didn’t do much on the offensive end either, finishing with 7 points, though he did grab 12 boards. For the Spurs, Tim Duncan scored 14 points, Tony Parker dished out 12 assists and rookie Kawhi Leonard had 12 points and 10 rebounds. San Antonio got in front by 17 in the first half, and Memphis was never able to get to within single digits at any point after halftime, despite being at home for the first time in 10 days. The Spurs are now 13-9 and play the Rockets and Hornets before a brutal three-game stretch that pits them against Oklahoma City, Philadelphia and Memphis again.

Beeeaaaaazzzz. He’s back! Michael Beasley tied a Timberwolves franchise record for points off the bench with 34 (the others: Rashad McCants, Wally Szczerbiak), Kevin Love had 29 points, Ricky Rubio continued his 3×2 flirtation and Minnesota scored a franchise record 42 points in the third quarter to beat the Rockets and improve to 10-11. Rubio finished with 18 points, 11 assists and 8 rebounds (and, for what it’s worth, a +22 plus/minus while he was on the floor) while playing a team-high 38 minutes. Indeed, he’s unique. The game was close until that third quarter, and the Wolves shot a ridiculous 58 percent from the field for the game. Minnesota’s five road wins this season equals their total number of wins away from home from last year—and the year before, too. Kevin Martin scored 29 points, but the Wolves held Luis Scola to 2-of-8 shooting. The only thing Scola could hit was, well, KLove’s man-area when he tried to save a ball from going out of bounds.

Utah rallied from 11 down to grind out a win and get to 12-7 on the year behind 19 points, 15 rebounds and 2 blocked shots from Paul Millsap and an 11-7-4 line from Josh Howard in his first start as a member of the Jazz. The Salt Lake City squad shot just 38 percent from the field, but grabbed 18 offensive rebounds and scored 20 fast break points. The Blazers held a one-point lead heading into the fourth quarter, thanks mostly to LaMarcus Aldridge (who finished with 25 points), but couldn’t fend off the Jazz. Portland had possession down by two with under a minute left, but Nicolas Batum (15 points) appeared to injure his knee on a drive to the basket and fumbled the ball back to Utah. Gordon Hayward (12 points on 3-12 shooting) made 1 of 2 free throws with 13.3 seconds left to extend the Jazz lead to three, then grabbed a critical offensive rebound on a CJ Miles’ miss from the foul line, effectively icing the game in favor of Utah. But the highlight of the game, even in defeat, goes to Gerald Wallace, who slammed a Hayward dunk attempt against the glass with authority.

One night after surviving the Spurs in epic fashion, the Mavs faced another familiar foe in Phoenix, but without the most recognizable face on the Suns, since Steve Nash sat out to nurse a bruised thigh. Without Nash, the Suns limped to 7-13 on the year, allowing Dallas to shoot 55 percent from the field (not Nash-related) and getting out-assisted 31-21 (Nash-related). The Mavs got a season-high 25 points off the bench from Delonte West, 21 from Vince Carter and 20 from Shawn Marion—allowing Dirk Nowitzki to get some rest, as he played only 28 minutes (10 points). The 122 points were the most for Dallas this season, and they never let the Suns get within closer than 16 in the second half, leading at one point by 28. Marcin Gortat’s 17-10 double-double requires that I once again propose naming him “The Machine,” or whatever similar version of that nickname is currently available.

This was supposed to be a great game. And it was. But not because it was close. In fact, it was the exact opposite—the Clippers came out in the first half and looked flat-out amazing, taking a 64-46 lead into the break. In the second half, we got the Dunk O’ the Year and a classic closer job from Chris Paul. Lob Angeles was so good, it was hard to even notice that the NBA’s best team (by record) was even on the court, or that Kevin Durant was sharing the hardwood. Over the first two quarters, LAC made 25 of 44 field goals (57 percent), including 10 three-pointers (in 1 half!) and they had 19 assists. Just before the half, the Clippers hit four threes in a minute, erupting the home crowd. OKC (16-4) made a push in the second half, behind 36 and 31 from Durant and Russell Westbrook, respectively, but Blake Griffin stole the show with his insane dunk over Kendrick Perkins (see below, over and over) that impressed Larry Fitzgerald among others and had Brandon Jennings tweeting up a storm. Then, CP3 took over the reins down the stretch, proving why he was so sought after in the offseason. Is there a more fun guy to watch in beastmode than Paul? He broke down defender after defender and finished in a variety of ways—pull-up jumper, blow-by layup, take your pick. He ended his night with 26 points and 14 assists, while Griffin and Caron Butler added 22 points each for the Clips, now 12-6.

Other Moment of the Night: More Clippers, as LAC blows the roof off the building at Staples Center, making it rain from three and all but running the Thunder off the court late in the first half. And jeez, this was pre-Blake ending the game.

Interview of the Night: Priceless B-Easy material. “Michael, what kind of groove did you get into in that first half?” … “My regular groove.”

Tonight: Tuesday brings us 7 games, including a Cavs-Celtics rematch, a big-time Western Conference heavyweight tilt between the Grizzlies and Nuggets, and the one I’ll be in the building for—Knicks-Pistons at MSG. Because I don’t limit my torture to the Wizards. Any ragged sub-.500 Eastern Conference teams will do! See y’all tomorrow.